Israeli Journalist Gideon Levy: ‘The Deal of the Century Is the Joke of Century’ 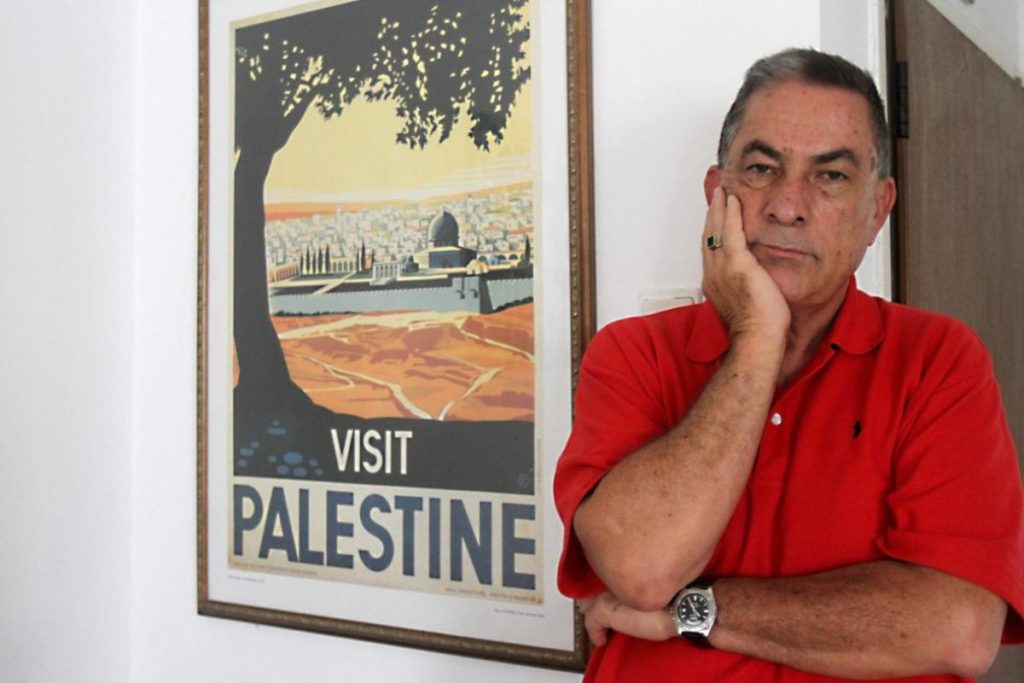 25 May 2019 – The voice is clear; a slight Hebrew accent can be detected when Gideon Levy speaks English. He is precise and concise, showing off maybe some “chutzpah”, but his way of saying things is direct. Does this make Gideon Levy annoying? Certainly not. On the contrary, kindly and patiently he explains what is at stake here.

Some call Gideon Levy Israel’s conscience, others would rather insult him. Levy is a whistleblower. He would probably hate to be described as such. He is a journalist, and now a columnist at Israeli English daily Haaretz. He is also a board member there. Every week, his columns contradict the nationalist and religious ideology of those in power.

The Most Hated Man in Israel

Levy has the distinct honour of having been considered by the authorities as a “threat” to the country’s security. What did he do to stir up such anger? Almost every week for three decades he visited the occupied territories and described what he saw there. Even though he has not been able to go to Gaza since 2006 (Israeli law prevents any Israeli from entering the Strip), he was able to highlight the killing of Palestinians. His book, “The punishment of Gaza“, earned him the nickname “Hamas propagandist” by far-right nationalists. His work led renowned journalist Robert Fisk to ask: “Is he the most hated man in Israel or just the most heroic.”

His goal is simple; rehumanising the Palestinians when everything is being done to dehumanise them, he explains. From the occupation to the slow suffocation of their culture, dispossession, demolition, erasing their names, their villages, their society… Levy’s columns speak of daily struggles, give details about people’s stories, name them and give them back their faces, ages and deaths. This includes the story of a Bedouin woman who, in 1986, was forced to give birth at an Israeli checkpoint. Her newborn died because she could not reach hospital in time and had to walk the two kilometres alone with the baby in her arms.

He remains surprised, he says, by the average Israeli’s ignorance of a reality that often takes place a few minutes away from home. Israeli society “is living in denial, in lies. But totally consciously. People choose to live like this,” he tells MEMO.

“Israeli society is a very aggressive society. But you can’t generalise this. There are easy times and there are hard ones, when there is a war for example. But I still write about Gaza and its uprising. I wrote that what is happening in Gaza is the uprising of the Gaza ghetto. People became very aggressive.” This reference to the uprising of the Warsaw ghetto during the Second World War brings to mind a symbolic part of the Israeli “historiography”. “That, might upset people, but I still have total freedom of speech; in my newspaper but not only there. Also on TV. It’s not pleasant every time but I can’t say that they’re trying to shut my mouth.”

His years in the media have allowed him to understand Israeli society and the officials that govern it. The latest Israeli elections, which saw incumbent Prime Minister Benjamin Netanyahu re-elected, are just the latest events which have stirred controversy, not least because of the numerous corruption cases in which Netanyahu is entangled.

In spite of this, his win was no surprise to Levy. “He created this situation in which people believe there is no alternative to him. He rules mainly by spreading fear. But he spreads fear and presents himself as the only one who can protect people. He’s a very talented politician with a very good rhetoric.”

He has also created a situation in which many people believe that these corruption charges are false and that he is simply innocent, he is a victim, and they identify with him.

“Gantz was not a real challenger and he will disappear from the political stage very quickly, I think. But many people voted for him. In fact, they didn’t vote for Gantz but they voted against Netanyahu. There’s people who actually want Netanyahu out,” he adds.

But both men are the same, he continues. “After the operation in Gaza, Gantz said the same things as Netanyahu. When it comes to the major issues, like the occupation, there is not much difference between the two of them.”

OPINION: The Israeli Elections, reading the Significance and Repercussions

Netanyahu’s international connections worry Levy, as do his friendships with right-wing governments in Brazil, the US and Hungary.

“Netanyahu can be friends only with those people. Because nationalists and neo-fascists find common language with other fascists… He can’t really dwell on who is anti-Semitic or not, because at the end of the day, what matters is to maintain the occupation. It justifies everything in his eyes.” 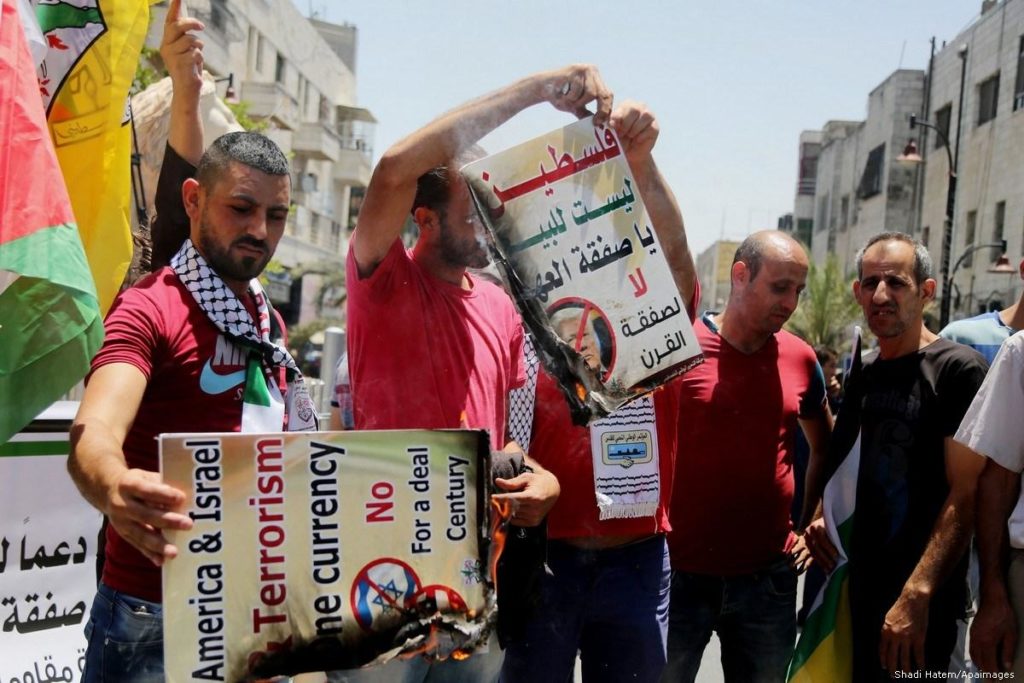 Palestinians stage a protest against the ‘Deal of the Century’, planned by US President Donald Trump to solve the conflict between Palestine and Israel, in Ramallah, West Bank on 2 July 2018.  [Shadi Hatem/Apaimages]

The Deal of the Century: A Joke

It is these “friends” that are supporting Israel in peace agreements and annulling previous deals including those which discuss a two-state solution for the Palestine-Israel conflict. Netanyahu, Levy says, “doesn’t speak about it anymore”. “Even when he spoke about it, it was very easy for him because he knew nothing will come out of it. It was the best way to maintain the status quo without doing anything.”

The US’ latest peace plan – dubbed the “deal of the century” – is due to be unveiled in June after the Muslim month of fasting comes to an end. This, Levy says, is the “joke of the century”.

“It will just give Israel more years to maintain the occupation and to carry on its crimes. Nobody can take this seriously. It comes from Trump and [his son-in-law and advisor] Kushner, who can take it seriously?… It can’t be serious because it’s not fair. Those people are totally one-sided. How can you even consider listening to them when they so clearly stand with only one side and they are so aggressive towards the other side? What kind of mediators can they be?” he adds. 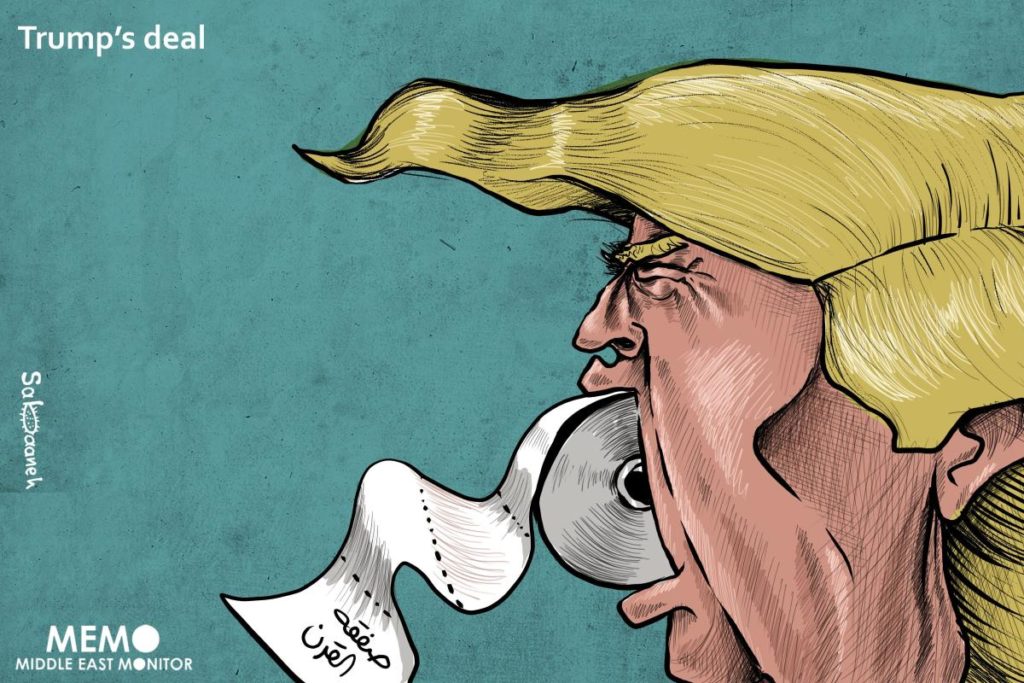 Even the UN declaration that the besieged Gaza Strip will be “uninhabitable” by 2020 cannot save Palestinians there, Levy explains. “It’s not a war. It’s a terrible prison. From time to time, the prisoners are trying to resist, to protest. But the guards hit back harshly. And they stay silent for a few months but again they try to break the cage. It will continue to be like this forever.”

OPINION: A common Enemy, why Israel is embracing fascism in Europe

“There is no plan for Gaza because nobody cares. Even Europe doesn’t care much. I’m not even mentioning the US. Everyone became quiet and unmoved. Until the catastrophe comes. But as long as it’s not here, nobody cares.”

The occupation led Levy to vote for the Arab-Israeli parties in the last election, he explains this is “because for me it’s hard to vote for any Zionist party. I cannot identify myself anymore with any Zionist list.”

“I’m not anti-Zionist,” he explains, “Post Zionist would be the right definition. I just realised that Zionism completed its purpose; now it’s about creating a democracy, nothing else but a democracy. The ‘all equal’ rights. I don’t see another solution but a one-state solution.”

OPINION: ‘Web of Weirdness’, US and Israeli co-dependent relationship is not just about money

The debate about Israel’s occupation and what solutions there are to it, has led to accusations of “anti-Semitism”, Levy says.

It paralyses Europe, because nobody wants to be labelled an anti-Semitic. And therefore, they don’t talk about international laws and how they are violated by the illegal occupation. They keep apologising for being anti-Semitic, totally dismissing the crimes perpetrated by the occupation forces.

“There is anti-Semitism in the world but way less than what Israel claims,” he explains. “People in Europe, people with conscience should say we have the full right, more, it’s our duty, to criticise the occupation, to be anti-Zionist.”

Is there hope for change stemming from the Jewish diaspora, especially those in America? “There are changes sure, but let’s not exaggerate. Still, the Jewish establishment is supporting Israel blindly, automatically supporting the occupation and Netanyahu. Yes, there is a new generation and a new camp there, which is very promising because they are very liberal. But there is a long way to go, because for most of them, standing against Israel is something they can’t do yet. But this movement goes hand in hand with changes in the [US’] Democratic party. This is even more promising because it is the first time ever that Netanyahu has been called a racist. We’ve never heard that before.”

Hassina Mechaï is a French-Algerian journalist based in Paris. Her topics of reflexion are world governance, civil society and public opinion, media and cultural soft power. She has worked for various French, African and Arab media.