The Balkan Wars Created a Generation of Christian Terrorists

War radicalized the far-right — and nobody stopped them at home. 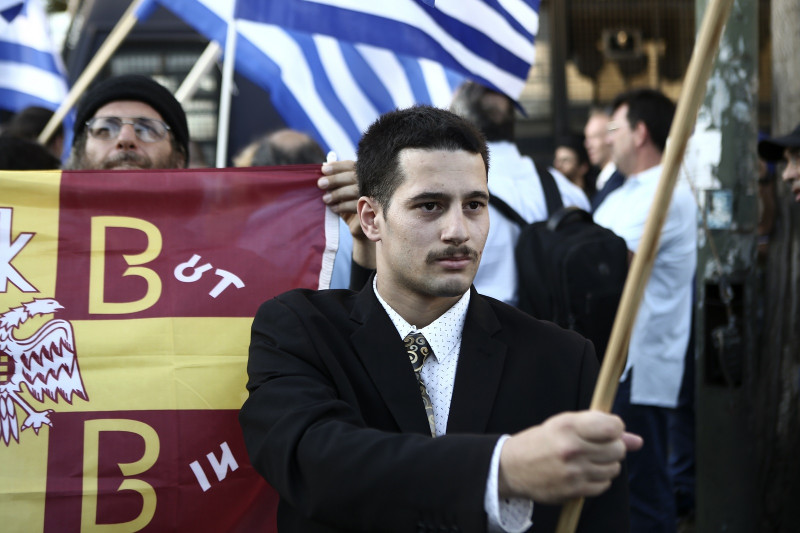 Supporters of Greece’s far right Golden Dawn party protest against the construction of a mosque in central Athens on September 5, 2018.
Panayotis Tzamaros/NurPhoto via Getty Images

24 May 2019 – The Soviet invasion of Afghanistan and the subsequent civil war were a powerful seedbed for Islamist radicalism. So were other wars, from Chechnya to Iraq. But one critical conflict that has shaped the course of global extremism and terrorism has been overlooked. Much of the current global far-right extremism was cooked in the furnace of the Balkan conflicts of the 1990s, especially the Bosnian War.

The Muslim side of this story is well known. Bosnian Muslim militias were joined by thousands of foreign volunteers. Some were fresh recruits from Western Europe. Others were veterans of the jihad in Afghanistan against the Soviet invasion in the ’80s. The fighting skills developed by the foreign volunteers in the war, the contacts forged with others from across the world, and the radicalization of the fire of battle laid the foundations of entire networks of Islamist extremist violence with which the world contends to this day.

These developments, however, were not unique to the Muslim side in the conflict. Thousands of volunteers from across Europe also joined the Orthodox Christian Bosnian Serb Army and the Catholic Bosnian Croat army. The Croat side in particular attracted many neo-Nazis from across the continent during this period. That was thanks in no small part to the decision by the national government in Zagreb to reprise as national markers the World War II-era symbols of the Independent State of Croatia, a fascist puppet regime of the Third Reich.

Just as with the Muslim volunteers, the Christian veterans returned to their home countries after the war, radicalized and ready for new action. At least some of these veterans became the core of new right-wing militias that would over time morph into potent political forces. One of the more notable examples of this is the Golden Dawn in Greece. Key Golden Dawn members were known to have participated in the Srebrenica massacre of over 8,000 Muslim Bosniaks in 1995, during the war.

Just as with the Muslim volunteers, European governments were very slow to recognize the threat these radicalized veterans posed to their own societies upon their return. Many in Greece at the time, including people in government, lionized the Greek participants in the massacres, especially along religious and ideological lines. The same held true in many countries in Eastern Europe, notably Ukraine, Romania, and Russia, and in certain circles in Western Europe as well.

And of course, no European government undertook any known programs to deradicalize and reintegrate returning fighters into mainstream society. The idea wasn’t even on the agenda. Nor was there any legal accountability for crimes committed by these people while they were away. If anything, some of the fighters were rewarded with notoriety and a political platform for the future.

This failure produced the same kinds of figures and networks of radical extremism on the European right as happened with Islamist terrorism.

This failure produced the same kinds of figures and networks of radical extremism on the European right as happened with Islamist terrorism.

The list of terrorists and nationalist radical propagandists to emerge from, or be inspired by, the Bosnian war is proportionally extensive. Here we can point to some of the most publicly recognizable figures from the last two decades: Jackie Arklov, a Swede who fought for the Catholic Croats, and even, indirectly, Anders Breivik, the perpetrator of the worst terrorist attack in Norwegian history in 2011.

Arklov, for example, was a Liberian-Swedish neo-Nazi who joined the Croatian Defense Forces, and who victims say conducted brutal tortures in Croat-run concentration camps in Herzegovina. He was arrested and convicted for war crimes by the Bosnian government. After a year he was released as part of a prison exchange, and he returned to Sweden, where he was acquitted of the crimes for lack of evidence. He repaid the Swedish state’s lenience by subsequently starting a neo-Nazi group in Sweden with two others. Not long after, they were arrested and convicted for the murder of two Swedish police officers in 1999.

Breivik, by contrast, didn’t fight in the wars. He was only a teenager at the time. But his ideological outlook was later greatly inspired by the Orthodox Serb extremists. And indeed, his outlook is quite broadly representative of the European far-right. A recurrent theme in their thinking is the notion of an eternal war between European and Islamic civilizations, most acutely fought through the proliferation of populations, with what they term the “white European race” representing the Christian or Enlightenment Western culture—internal contradictions between Christianity and indigenous Europeanness, and between conservative Christianity and the outlook of the Enlightenment, notwithstanding—and the Middle Eastern, brown races representing what they see as Medieval, backward, repressive Islam.

The notion of an ongoing war between Christendom and Islam has a long-standing history in the Balkans and beyond. But the notion that this conflict is waged at this moment in time by demographic competition between races has a distinctive Serbian pedigree. Take for example this pronouncement by Radovan Karadzic, the leader of the Bosnian Serbs during the Bosnian War:

“The Muslims didn’t want to transform Bosnia into a confederation or into three constituent states for Croats, Serbs, and Muslims. They wanted the whole of Bosnia-Herzegovina for themselves. The Bosnian Muslims want, ultimately, to dominate, relying on a very high birth rate. They even wanted to move some Turks from Germany to Bosnia to help build their Islamic society. Since such a strategy of domination would be at the expense of Bosnian Serbs, we have resisted it by protecting our own villages.”

It was this kind of thinking that entrenched the general tendency toward genocidal attitudes among especially the Serbians throughout the Balkan wars, and which later evolved in today’s ubiquitous notion among the European (and indeed American) far-right of the so-called great replacement: the idea that white European culture, civilization, and race are being displaced in Europe by Muslim migration, which in turn justifies violent retaliation.

Breivik made the Balkans connection explicit when, in his manifesto, he praised Karadzic, saying that “for his efforts to rid Serbia of Islam he will always be remembered as an honorable Crusader and a European war hero.” It’s a choice of language and terminology that resonates equally strongly with both Serbian nationalism in the ’90s and far-right extremism today.

Yet for all that, perhaps the most important legacy of the Balkan wars and Bosnia, more important than the returning fighters or the ultra-radical discourse, was the shattering in Europe of the postwar illusion of a civilized international community watching over the world.

The Balkan wars, and especially the one in Bosnia-Herzegovina, were some of the very first conflicts to be broadcast live on television, right after the First Gulf War. And what the entire world saw were brutal atrocities and massacres, left, right, and center, including outright genocide committed against the Bosniak Muslim population. Random militias with more or less state support could set up camps, torture, rape, kill, and burn down religious and cultural heritage as the so-called free world just watched. They watched with horror, but all they did was watch—passively and impotently.

It would be another five years before the United States and the West intervened against Serbia, and over a decade until anyone saw justice in an international tribunal. Meanwhile, televised genocide was a great mobilizing factor for extremists on all sides. Those watching would be forgiven for coming away with the conclusion that atrocities could be committed with impunity. So, if you wanted to prevent atrocities by the other side, the only way would be to beat them to it and crush them before they could crush you.

The war marked a pivotal point in European history. Murderers and fascists were not only let off the hook but also glorified—live on television. With that precedent burned into the collective memory of a generation, the resurgence of European fascism writ large was only a matter of time.

Azeem Ibrahim is a research professor at the Strategic Studies Institute at the U.S. Army War College and a director at the Center for Global Policy in Washington. He is the author of Radical Origins: Why We Are Losing the Battle Against Islamic Extremism and a former expert advisor to the U.K. government’s Commission for Countering Extremism.

Hikmet Karcic completed his Ph.D. from the International University of Sarajevo and is currently a genocide scholar at the Institute for Islamic Tradition of Bosniaks in Sarajevo, Bosnia-Herzegovina.