These Are the Pitfalls of a Cash-Free Society

Half of Sweden’s retailers expect to stop handling cash by 2025.
Image: REUTERS/Michael Dalder

2 May 2019 – Buskers, street performers and homeless people taking contactless payments. Shops, cafes and restaurants no longer accepting cash. Parishioners making digital donations to their churches instead of dropping notes or coins on to a collection plate.

These scenarios are swiftly becoming reality in countries leading the shift towards a cashless future. But an independent report on cash use published in the UK finds that the rush to embrace digital payments risks leaving people behind, especially the most vulnerable in society.

For the report, researchers spoke to central bankers, consumer groups and a cross-party commission in Sweden, considered to be the most cashless society in the world. They emphasized the importance of planning now, to include everyone in the digital economy.

Half of Sweden’s retailers expect to stop handling cash by 2025. And last year IKEA trialled its first cash-free store. Cash in circulation has dropped to 1% of GDP.

A fifth of Swedes don’t withdraw cash anymore, and only 13% reported using it for a recent purchase, compared to 40% in 2010.

Some 85% of transactions in Sweden happen by card, online, or Swish, a smartphone payment app. Cash use has been falling so fast that the Deputy Governor of Central Bank of Sweden (Sveriges Riksbank) Cecilia Skingsley has predicted the country is likely to become cashless within three to five years.

Amid the many benefits of digital payments – their ease of use, potential to cut costs for businesses and reduce tax evasion, corruption and organized crime – there’s growing concern about those who don’t have credit cards or bank accounts, have difficulty using smartphones and computers for banking and payments, or a lack of broadband and mobile connectivity.

Retirees, recent immigrants, people with disabilities and those living in rural areas are especially vulnerable. So, while it looks for solutions, Sweden’s central bank has told all banks to keep offering cash services.

The report, called the Access to Cash Review, says Sweden’s experience “outlines the dangers of sleepwalking into a cashless society: millions of people could potentially be left out of the economy, and face increased risks of isolation, exploitation, debt and rising costs.” 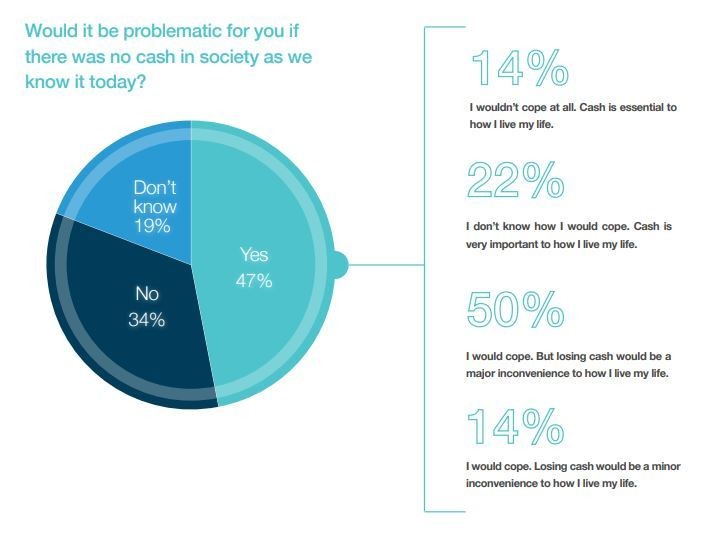 Many people say they would find a cashless society problematic.Image: Access to Cash Review

One potential option for Sweden is the e-krona, Skingsley says, which would be a digital currency, with a 1-to-1 conversion with an ordinary krona held in an account at the Riksbank or stored locally, on a card or in a mobile app. The technology is already available.

Planning for a Cashless World

According to PwC research, almost half the world’s digital payments in 2017 were made in China, where apps such as Alipay and WeChat Pay let consumers pay for nearly everything with their smartphones. The adoption of QR codes and explosion of e-commerce has led to a decline in the use of cash, particularly in urban China.

In the United States, concerns about the demise of cash are emerging. Philadelphia, where almost 13% of the population doesn’t have a bank or savings account, passed a new law requiring retailers (with some exceptions) to accept cash, and New Jersey has followed with a bill banning cashless stores statewide. New York City, Washington, San Francisco and Chicago are considering similar legislation.

But in other parts of the world, such as India, the government has taken dramatic action to curb cash in order to tackle tax avoidance and corruption. In 2016, Prime Minister Narendra Modi made 1,000 and 500 rupee notes invalid overnight to flush out stashes of tax-free ‘black money’.

A decade ago, cash was used for six in 10 payments in the UK. Now it’s three in 10. The Access to Cash Review finds that the UK could be at Sweden’s level of cashlessness in 10 to 15 years, but warns that the country isn’t ready; 17% of the population – over 8 million adults – would struggle to manage without access to cash.

The report makes five recommendations for action to support people who rely on cash:

“Once infrastructure has gone, or communities have been harmed, rebuilding is very hard,” the report says. “But if we act now, we can take steps to stop harm happening, and prepare for a world of lower cash, without societal and economic damage.”