US Takes Back Signature on Arms Trade Treaty 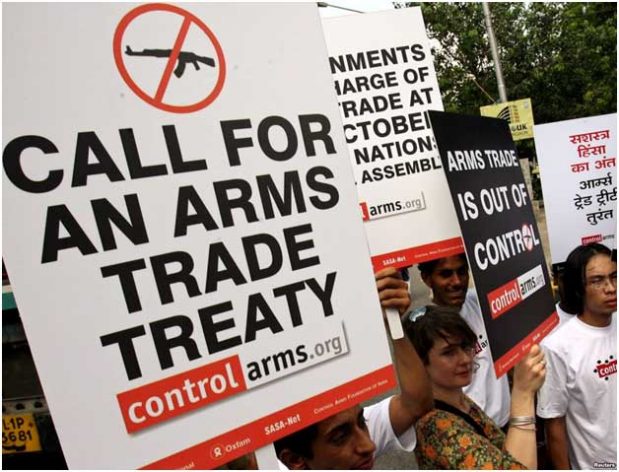 29 Apr 2019 – The United States dropped a political bombshell when President Donald Trump announced his administration would withdraw from the historic Arms Trade Treaty (ATT) which the former Obama administration signed in September 2013.

“We are taking our signature back”, said Trump on April 26, addressing a meeting of the National Rifle Association (NRA), one of the most powerful gun lobbies in the US.

The US, in effect, joins three other “rogue states” – North Korea, Iran and Syria – who voted against the treaty at the UN General Assembly back in April 2013, along with 23 countries that abstained on the voting, including China, Russia, India, Indonesia and Saudi Arabia.

Jayantha Dhanapala, a former UN Under-Secretary-General for Disarmament Affairs and ex-President of the Pugwash, told IPS that President Trump “continues to create mayhem in the field of disarmament by wrecking the legal regime created by the international community at the behest of vested interests in the gun lobby sacrificing the humanitarian norms of the world to which the US has contributed.”

The US, which has increasingly shown virtual contempt for multilateralism, has already scuttled the 2015 multilateral nuclear agreement with Iran, refused to participate in the global migration compact, pulled out of the 2015 Paris climate change agreement, abandoned the 12-nation Trans Pacific Partnership (TPP) agreement, and revoked the 1987 Intermediate-Range Nuclear Forces Treaty with Russia.

Dr. Natalie J. Goldring, a Senior Fellow and Adjunct Full Professor with the Security Studies Program in the Edmund A. Walsh School of Foreign Service at Georgetown University, told IPS President Trump is pandering to the National Rifle Association yet again.

She said his announcement that the United States is “un-signing” the Arms Trade Treaty is yet another example of this administration’s abdication of responsibility in the arms control sphere.

In the fact sheet announcing this decision, the Trump Administration stated, “The ATT is simply not needed for the United States to engage in responsible arms trade.”

“The Trump Administration has not been engaged in responsible arms trade in any way, shape, or form. There is indisputable evidence that Saudi Arabia, for example, consistently violates international human rights and humanitarian law”.

“But the Trump Administration continues to pursue arms sales agreements with the Saudi regime,” said Dr Goldring, who is also a Visiting Professor of the Practice in the Duke University Washington DC program.

She pointed out that the United States is the world’s largest arms dealer. It’s long past time for the United States to show leadership on the global arms trade, rather than merely treating arms sales as economic transactions, she added.

The ATT, which was adopted by the United Nations in April 2013 and entered into force in December 2014, was initiated by the UK, a NATO ally of the US.

Responding to questions at a press briefing April 26, UN spokesperson Stephane Dujarric told reporters that the Arms Trade Treaty is the only global instrument aimed at improving transparency and accountability in the international arms trade.

“It is a landmark achievement in the efforts to ensure responsibility in international arms transfers. This is particularly important in present times, when we witness growing international tensions and renewed interest in expanding and modernizing arsenals,” he added. 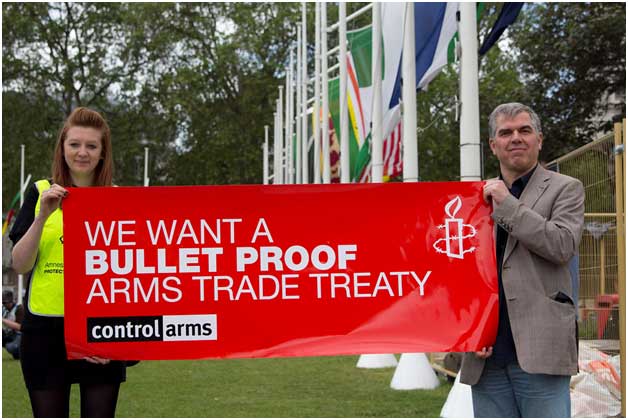 Rachel Stohl, Managing Director at the Stimson Center and a consultant who helped draft the text of the treaty, said that President Trump has “once again walked away from America’s leadership role in the world and undermined international efforts to reduce human suffering caused by irresponsible and illegal arms transfers”.

The ATT facilitates transparency and accountability in a global arms trade worth nearly $90 billion a year, building confidence among governments and ending decades of impunity, she declared.

Dr Goldring said the US government regularly claims to have the strongest global standards for arms transfers. Yet it seeks to abandon the only legally binding treaty that addresses these issues.

“This may seem like a symbolic step, because the Trump Administration had already made clear its lack of support for the treaty,” she added.

But this act has substantive implications as well.

It’s in the US interest to be part of the ATT and to work with other countries to increase their standards for importing and exporting weapons, she noted.

‘Unsigning’ the ATT decreases our leverage with these countries. ‘Do as I say, not as I do’ is a cynical and unpersuasive policy approach,” said Dr Goldring who also represents the Acronym Institute at the United Nations on conventional weapons and arms trade issues.

Abby Maxman, President of Oxfam America, said Trump’s decision to un-sign the Arms Trade Treaty “is a reckless, self-inflicted wound that continues to demonstrate the Administration’s desire to turn its back on global norms, standards and US leadership. It is one more misguided step to dismantle the international partnerships that keep us all safe.”

Just last week, the Administration held hostage a UN Security Council resolution to address sexual violence in conflict– until language about the need for sexual & reproductive health services was removed.

And, it’s no coincidence that this comes on the heels of President Trump’s veto of the Yemen War Powers Resolution and continued military support for Saudi Arabia in the war in Yemen, said Maxman.

President Trump is sending a clear message to civilians caught in the crossfire: “we don’t care.”

The United States will now lock arms with Iran, North Korea and Syria as non-signatories to this historic treaty whose sole purpose is to protect innocent people from deadly weapons.

“The Arms Trade Treaty was developed and signed by the US and others to keep deadly weapons out of the hands of those who may use them to commit genocide, crimes against humanity and war crimes. The treaty has the power to save millions from death, rape, assault and displacement. Each year an estimated 500,000 people are killed as a result of the unregulated and under-regulated arms trade,” said Maxman.

“The Treaty does not infringe on Americans’ right to bear arms or hamper the country’s ability to defend itself or its allies, despite what groups like the NRA, and the Trump Administration may claim.”

Last week’s announcement, he said, “is an empty play to pander to those who resisted this Treaty from the beginning.”

Meanwhile, in a report released April 29, the Stockholm International Peace Research Institute (SIPRI) said total world military expenditure rose to $1,822 billion in 2018, representing an increase of 2.6 per cent from 2017.

The five biggest spenders in 2018 were the United States, China, Saudi Arabia, India and France, which together accounted for 60 per cent of global military spending.

Military spending by the US increased for the first time since 2010, while spending by China grew for the 24th consecutive year. The comprehensive annual update of the SIPRI Military Expenditure Database is accessible from at www.sipri.org.

The US remained by far the largest spender in the world, and spent almost as much on its military in 2018 as the next eight largest-spending countries combined.

‘The increase in US spending was driven by the implementation from 2017 of new arms procurement programmes under the Trump administration,’ said Dr Aude Fleurant, the director of the SIPRI AMEX programme.

Thalif Deen, Director, Senior Editor, UN Bureau, Inter Press Service (IPS) news agency, has been covering the United Nations since the late 1970s. As the former UN Bureau Chief for Inter Press Service, he was cited twice for excellence in U.N. reporting at the annual awards presentation of the U.N. Correspondents’ Association (UNCA). In November 2012, he was on the IPS team which won the prestigious gold medal for reporting on the global environment– and in 2013 he shared the gold, this time with the UN Bureau Chief of Reuters news agency, for his reporting on the humanitarian and development work of the United Nations. A former information officer at the U.N. Secretariat, he served twice as a member of the Sri Lanka delegation to the UN General Assembly sessions. His track record includes a stint as deputy news editor of the Sri Lanka Daily News and senior editorial writer on the Hong Kong Standard. A former military editor Middle East/Africa at Jane’s Information Group, a columnist for the Sri Lanka Sunday Times and a longtime U.N. correspondent for Asiaweek, Hong Kong and Jane’s Defence Weekly, London, he is a Fulbright scholar with a Master’s Degree in journalism from Columbia University, New York. He can be contacted at thalifdeen@ips.org