26 Apr 2019 – The ordinary Ukrainian people are so sick and tired of the militaristic nationalism as well as endemic corruption in Kiev that they voted for someone, anyone, who appears slightly more reasonable. 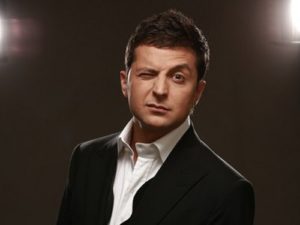 The stunning victory of TV funny man Vladimir Zelensky in Ukraine’s presidential elections has tempted notions of a new opportunity to resolve the conflict in eastern Donbas region. The ongoing war has crippled the entire country, caused over 13,000 deaths and resulted in nearly one million people displaced from their homes.

Zelensky has called for direct talks with Russia to help bring about a political settlement. Potentially, this apparently more engaged attitude in Kiev could be key to restoring peace in the region and furthermore resume normal relations with Russia. Moscow has given a cautious welcome to these developments. His landslide victory is certainly a stunning popular repudiation of the anti-Russian mentality of his predecessor, Petro Poroshenko.

But there are so many contradictions and paradoxes in Ukraine’s recent presidential election and its outcome that expectations should be reserved.

For a start, the 41-year-old Zelensky who is a popular TV comedian is a complete political novice. His entire election campaign was vacant in any policy detail. Yes, he did say he wanted to hold direct talks with Moscow to end the nearly five-year war in eastern Ukraine between state forces and pro-Russian separatists. But then only days before his election, Zelensky disparaged Russia as an “aggressor” and described Russian President Vladimir Putin as an “enemy”.

The move this week by Russia to grant citizenship to ethnic Russian people from Ukraine’s breakaway Donbas region was roundly condemned by Washington and the European Union as undermining Ukraine’s sovereignty. Moscow said it was merely fulfilling internationally recognized legal rights of people with Russian heritage. In any case, Zelensky also joined in the ill-considered condemnations against Russia over its passport move. 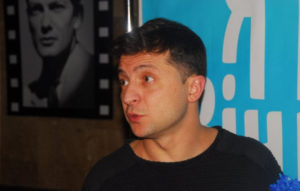 This suggests that the new Ukrainian president is a “Poroshenko-Lite”. The only change is a softening of the anti-Russian rhetoric that has so dominated the Kiev regime since the 2014 CIA-backed coup which ushered in Poroshenko’s presidency.

Zelensky has talked previously about implementing the Minsk peace accords signed in 2015, yet he has also contradicted himself by saying he will not grant the Donbas political autonomy or accede to an amnesty for combatants – meaning the war against the ethnic Russian population by the Russophobic Kiev regime will continue. He also – shamefully – made public comments apparently valorizing the Nazi collaborator Stepan Bandera and the latter’s fascist followers.

Moscow is therefore correct to express caution in the political significance of the new Ukrainian president. The Kremlin said it will await substantive action and policy changes, rather than basing its judgement on the vapid words of a TV star-turned-politician. There is an analogy here with US President Donald Trump and how his ascent to the White House changed nothing in Washington’s hostile policy towards Russia.

Perhaps the clearest conclusion to be drawn is that Ukrainian citizens expressed not so much support for Zelensky – how could they when his manifesto was so utterly vacuous? – but rather his landslide victory was a massive repudiation of the incumbent president and the anti-Russia mentality in Kiev that was such a hallmark of Poroshenko’s presidency.

In other words, the ordinary Ukrainian people are so sick and tired of the militaristic nationalism as well as endemic corruption in Kiev that they voted for someone, anyone, who appears slightly more reasonable. Even if that candidate is a comedian with no political vision.

For the past five years, the Kiev-dominated Ukrainian state has been nothing but a puppet regime for Washington, NATO and to a lesser extent the European Union. It has served as a spearhead against Russia with vile provocations and slander. It is in fact an abomination of international law and democratic principles.

There is no sign that things will change fundamentally under this new president in spite of his seemingly more reasonable rhetoric. The hopes of Ukrainians for economic improvement, elimination of corruption by oligarchs and normalization of relations with their compatriots in Donbas and with Russia will likely be dashed. Voting for comedian Vladimir Zelensky as some kind of savior for their numerous woes could turn out to be a very cruel joke.

The problem lies in Kiev being a puppet regime for Washington which functions to push an anti-Russia geopolitical agenda. Zelensky is not a solution; his turn at the presidency is merely an intermission break from the ongoing calamity that is Ukraine.

Strategic Culture Foundation provides a platform for exclusive analysis, research and policy comment on Eurasian and global affairs. We are covering political, economic, social, and security issues worldwide. Since 2005 our journal has published thousands of analytical briefs and commentaries with the unique perspective of independent contributors. SCF works to broaden and diversify expert discussion by focusing on hidden aspects of international politics and unconventional thinking. Benefiting from the expanding power of the Internet, we work to spread reliable information, critical thought and progressive ideas.