Jazz and Justice: Racism and the Political Economy of the Music 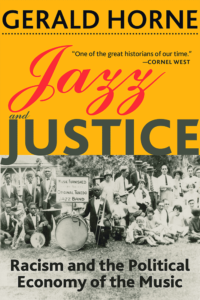 18 Jun 2019 – The music we call “jazz” arose in late nineteenth century North America—most likely in New Orleans—based on the musical traditions of Africans, newly freed from slavery. Grounded in the music known as the “blues,” which expressed the pain, sufferings, and hopes of Black folk then pulverized by Jim Crow, this new music entered the world via the instruments that had been abandoned by departing military bands after the Civil War. Gerald Horne’s Jazz and Justice: Racism and the Political Economy of the Music examines the economic, social, and political forces that shaped this music into a phenomenal U.S.—and Black American—contribution to global arts and culture.

Horne assembles a galvanic story depicting what may have been the era’s most virulent economic—and racist—exploitation, as jazz musicians battled organized crime, the Ku Klux Klan, and other variously malignant forces dominating the nightclub scene where jazz became known. Horne pays particular attention to women artists, such as pianist Mary Lou Williams and trombonist Melba Liston, who faced the triple jeopardy of racism, sexism, and class exploitation. He also limns the contributions of musicians with Native American roots who, because of the peculiarities of Jim Crow laws, were defined as African American. He traces the routes of those musicians forced into exile because of Jim Crow: Dexter Gordon in Copenhagen; Art Farmer in Vienna; Randy Weston in Morocco. Gerald Horne writes of the countless lives of artistry and genius—both known, like Armstrong, Ellington, and Coltrane, and unknown. This is the story of a beautiful lotus, growing from the filth of the crassest form of human immiseration.

“Gerald Horne has made an exhaustive examination of archives, oral history interviews, autobiographies, and secondary literature to present a devastating picture of what has been termed ‘cockroach capitalism’—the jazz business that ruthlessly exploits and degrades [not just] African American musicians.”

“What does it mean for descendants of enslaved people to create a music embraced by the world and still be treated as second-class citizens, exploited, dehumanized, and subject to premature death? By following the money, the managers, the musicians, and the bodies, Gerald Horne gives us enthralling view of jazz history from the underside. An essential contribution to our understanding of how racial capitalism shaped American music.”

“This book presents a serious look at jazz from one of the country’s premier historians and scholars. There is a 1:1 ratio between the treatment of African American musicians and the treatment of African American music. The central role of African Americans in the history of jazz is perpetually minimized. Gerald Horne does a masterful job of putting the development and history of jazz within its proper context. ¶ A prolific writer and preeminent scholar, Horne’s body of work covers the entirety of the African Diaspora, and will become more and more valuable to future generations. This book is a welcome addition.”

“Gerald Horne’s Jazz and Justice is an excellent political history of the popular music form of African descendants in the United States. Horne reconstructs the resistance of Black musicians to structural racism as it manifested in the entertainment industry. This insurgent interpretation of a densely researched manuscript applies an analysis of political economy in explaining the role of monopoly capitalism and organized crime in exploiting the art form of classical Black music. Jazz and Justice meets the standard that students and researchers of the Black experience expect from Professor Horne and continues his reputation as of the most prolific scholars of our time.”

“This unflinching account of jazz as historically entwined with racism, white supremacy (de facto and de jure), organized crime, and corrupt capitalist labor exploitation takes us to, through, and beyond the mid-century sleight-of-hand of U.S. imperialism in which jazz, integrated bands, and African American musicians are rolled out to symbolize American democracy. Moments of justice for African American musicians and their communities are few and far-between in this book, and seldom take place on U.S. soil.”

“Jazz and Justice is a concise take on How We Do That Hoo Doo We Do. In his interpretation of our Social perspective, Playing perspective, and Bidness perspective, Horne becomes a horn riffing a SIGNIFICANT SOCIAL COMMENTARY worthy of the Music.”

“Jazz and Justice is about the men and women whose imaginative genius created and still creates the music that has come to be called Jazz. About their longings to be heard and be the beneficiaries of their product and their labor. It tells us of the struggles of musicians like Billie Holiday, Charles Mingus and Charlie Haden to make a social statement. It is the story of the record company owners and producers who in the words of Max Roach, “Have no mercy. No matter how much you’ve done and how much money you have made for them,” they want more. It is about James Reese Europe’s Cleft Club and the AACMs work to control the music they produce. Like Amira Baraka’s Blues People: Negro Music in White America, Horne takes us where we have not yet gone. And he makes us appreciate, even more, this music, its messages and its messengers.”

Gerald Horne is John J. and Rebecca Moores Professor of African American History at the University of Houston. He has published more than three dozen books, including Confronting Black Jacobins and The Apocalypse of Settler Colonialism, both by Monthly Review Press.