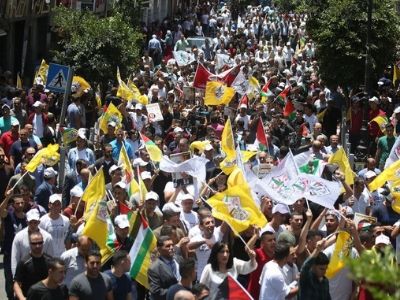 Palestinians stage a protest against the ‘Deal of the Century’, planned by US.
(Photo: via Twitter)

29 May 2019 – Palestinian groups, Fatah, Hamas and others should not confine themselves to merely rejecting the Trump Administration’s so-called ‘Deal of the Century’. Instead, they should use their resistance to the new American-Israeli plot as an opportunity to unify their ranks.

Leaked details of the ‘Deal of the Century’ confirm Palestinians’ worst fears: the ‘Deal’ is but a complete American acquiescence to the right-wing mentality that has ruled Israel for over a decade.

According to the Israeli daily newspaper, Israel Hayom, a demilitarised state, ‘New Palestine’ will be established on territorial fragments of the West Bank, as all illegal Jewish settlements would permanently become part of Israel. If Palestinians refuse to accept Washington’s diktats, according to the report, they will be punished through economic and political isolation.

This is certainly not an American peace overture, but an egregious act of bullying. However, it is hardly a deviation from previous rounds of ‘peace-making,’ where Washington always took Israel’s side, blamed Palestinians and failed to hold Israel to account. Washington has never refrained from supporting Israeli wars against Palestinians or even conditioned its ever-generous aid packages on the dismantling of the illegal Jewish settlements.

The only difference between the US ‘peace process’ of the past and today’s ‘Deal of the Century’ is in the style and tactics as opposed to the substance and details.

Undoubtedly, the ‘Deal’, championed by Jared Kushner, President Donald Trump’s adviser and son-in-law, will fail. Not only will it not deliver peace – this is not the intention – but it is most likely to be rejected by Israel. The formation of Israel’s new government under Benjamin Netanyahu’s leadership is centered round far-right and religious parties. It is no longer politically correct in the new Israeli lexicon to even discuss the possibility of a Palestinian state, let alone agree to one.

Netanyahu, however, is likely to wait for Palestinians to reject the deal, as they certainly should. Then, with the help of pro-Israel mainstream western media, a new discourse will evolve, blaming Palestinians for missing yet another opportunity for peace, while absolving Israel from any wrongdoing. This pattern is familiar, highlighted most starkly in Bill Clinton’s Camp David II in 2000 and George W. Bush’s Road Map for Peace in 2003.

In 2000, the late Palestinian leader, Yasser Arafat, rejected then Israeli Prime Minister, Ehud Barak’s ‘generous offer’, an entirely manufactured political hoax that, to this day, defines official and academic understanding of what had transpired in the secret talks then.

All Palestinians must reject the ‘Deal of the Century’, or any deal that is born out of a political discourse which is not centered on Palestinian rights as enshrined in international law, a political frame of reference that is agreed upon by every country in the world, save the US and Israel. Decades of fraudulent American ‘peacemaking’ prove that Washington will never fulfill its self-designated title as an ‘honest peacemaker.’

However, rejection per se, while going back to business as usual, is inadequate. While the Palestinian people are united behind the need to resist the Israeli Occupation, challenge Israeli apartheid and employ international pressure until Israel finally relents, Palestinian factions are driven by other selfish priorities. Each camp seems to rotate within the political sphere of foreign influence, whether Arab or international.

For example, Fatah, which is credited for ‘igniting the spark of the Palestinian revolution’ in 1965, has been primarily consumed with the trappings of false power while dominating the Palestinian Authority, which itself operates within the space allocated to it by the Israeli military occupation in the West Bank.

Hamas, which began as an organic movement in Palestine, is forced to play regional politics in its desperation for any political validation to escape the suffocating siege of Gaza.

Whenever both parties verge on forming a united leadership in the hope of resurrecting the mostly defunct Palestine Liberation Organization (PLO), their benefactors manipulate the money and politics, thus resuming disunity and discord.

The ‘Deal of the Century’, however, offers both groups an opportunity, as they are united in rejecting the deal and equally perceive any Palestinian engagement with it as an act of treason.

More importantly, the steps were taken by Washington to isolate the PA through denying Palestinians urgently needed funds, revoking the PLO’s diplomatic status in Washington and shunning the PA as a political ally provide the opportunity to open the political dialogue required that could finally accomplish a serious Fatah-Hamas reconciliation.

Israel, too, by withholding tax money collected on behalf of the PA, has lost its last pressure card against Mahmoud Abbas and his government in Ramallah.

At this point, there is little else that the US and Israel could do to exert more pressure on the Palestinians.

But this political space available for Palestinians to create a new political reality will be brief. The moment the ‘Deal of the Century’ is discarded as another failed American scheme to force a Palestinian surrender, the political cards, regionally and internationally, will be mixed again, beyond the ability of Palestinian factions to control their outcome.

Therefore, it is critical that Palestinian groups at home and in the diaspora push for Palestinian dialogue, not merely for the sake of forming a unity government in Ramallah but to revitalize the PLO as a truly representative and democratic body that includes all Palestinian political currents and communities.

It is only through the resurrection of the PLO that Palestinians could finally return to their original mission of devising a national liberation strategy that is not manipulated by money and not subjected to regional politicking.

If history is any indication, the ‘Deal of the Century’ is another sinister American attempt to manage the situation in Palestine to assert political dominance in the region. This ‘Deal’ is essential for American reputation, especially among its disgruntled regional allies who feel abandoned by the progressive American military and political retreat from the region.

This latest charade does not have to be at the expense of Palestinians, and Palestinian groups should recognize and grasp this unique opportunity. The ‘Deal of the Century’ will fail, but efforts to achieve Palestinian unity could finally succeed. 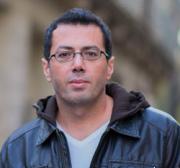