The American Cult of Bombing and Endless Wars 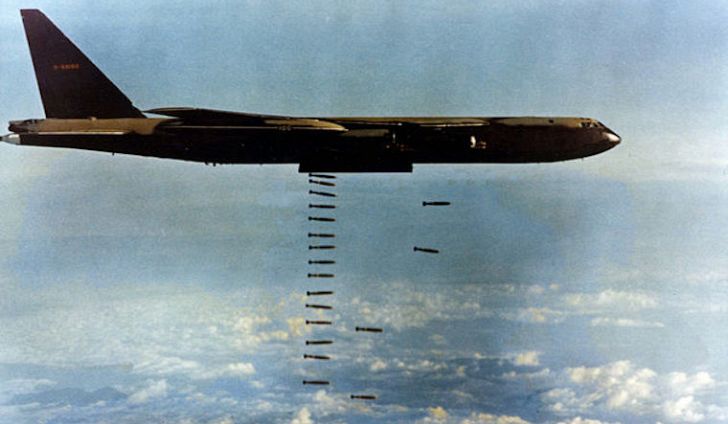 It’s always so much more awful on the ground.

4 Jun 2019 – From Syria to Yemen in the Middle East, Libya to Somalia in Africa, Afghanistan to Pakistan in South Asia, an American aerial curtain has descended across a huge swath of the planet. Its stated purpose: combating terrorism. Its primary method: constant surveillance and bombing — and yet more bombing. Its political benefit: minimizing the number of U.S. “boots on the ground” and so American casualties in the never-ending war on terror, as well as any public outcry about Washington’s many armed conflicts. Its economic benefit: plenty of high-profit business for weapons makers for whom the president can now declare a national security emergency whenever he likes and so sell their warplanes and munitions to preferred dictatorships in the Middle East (no congressional approval required). Its reality for various foreign peoples: a steady diet of “Made in USA” bombs and missiles bursting here, there, and everywhere.

Think of all this as a cult of bombing on a global scale. America’s wars are increasingly waged from the air, not on the ground, a reality that makes the prospect of ending them ever more daunting. The question is: What’s driving this process?

For many of America’s decision-makers, air power has clearly become something of an abstraction. After all, except for the 9/11 attacks by those four hijacked commercial airliners, Americans haven’t been the target of such strikes since World War II. On Washington’s battlefields across the Greater Middle East and northern Africa, air power is always almost literally a one-way affair. There are no enemy air forces or significant air defenses. The skies are the exclusive property of the U.S. Air Force (and allied air forces), which means that we’re no longer talking about “war” in the normal sense. No wonder Washington policymakers and military officials see it as our strong suit, our asymmetrical advantage, our way of settling scores with evildoers, real and imagined.

In a bizarre fashion, you might even say that, in the twenty-first century, the bomb and missile count replaced the Vietnam-era body count as a metric of (false) progress. Using data supplied by the U.S. military, the Council on Foreign Relations estimated that the U.S. dropped at least 26,172 bombs in seven countries in 2016, the bulk of them in Iraq and Syria. Against Raqqa alone, ISIS’s “capital,” the U.S. and its allies dropped more than 20,000 bombs in 2017, reducing that provincial Syrian city to literal rubble. Combined with artillery fire, the bombing of Raqqa killed more than 1,600 civilians, according to Amnesty International.

Meanwhile, since Donald Trump has become president, after claiming that he would get us out of our various never-ending wars, U.S. bombing has surged, not only against the Islamic State in Syria and Iraq but in Afghanistan as well. It has driven up the civilian death toll there even as “friendly” Afghan forces are sometimes mistaken for the enemy and killed, too. Air strikes from Somalia to Yemen have also been on the rise under Trump, while civilian casualties due to U.S. bombing continue to be underreported in the American media and downplayed by the Trump administration.

U.S. air campaigns today, deadly as they are, pale in comparison to past ones like the Tokyo firebombing of 1945, which killed more than 100,000 civilians; the atomic bombings of Hiroshima and Nagasaki later that year (roughly 250,000); the death toll against German civilians in World War II (at least 600,000); or civilians in the Vietnam War. (Estimates vary, but when napalm and the long-term effects of cluster munitions and defoliants like Agent Orange are added to conventional high-explosive bombs, the death toll in Southeast Asia may well have exceeded one million.) Today’s air strikes are more limited than in those past campaigns and may be more accurate, but never confuse a 500-pound bomb with a surgeon’s scalpel, even rhetorically. When “surgical” is applied to bombing in today’s age of lasers, GPS, and other precision-guidance technologies, it only obscures the very real human carnage being produced by all these American-made bombs and missiles.

This country’s propensity for believing that its ability to rain hellfire from the sky provides a winning methodology for its wars has proven to be a fantasy of our age. Whether in Korea in the early 1950s, Vietnam in the 1960s, or more recently in Afghanistan, Iraq, and Syria, the U.S. may control the air, but that dominance simply hasn’t led to ultimate success. In the case of Afghanistan, weapons like the Mother of All Bombs, or MOAB (the most powerful non-nuclear bomb in the U.S. military’s arsenal), have been celebrated as game changers even when they change nothing. (Indeed, the Taliban only continues to grow stronger, as does the branch of the Islamic State in Afghanistan.) As is often the case when it comes to U.S. air power, such destruction leads neither to victory, nor closure of any sort; only to yet more destruction.

Such results are contrary to the rationale for air power that I absorbed in a career spent in the U.S. Air Force. (I retired in 2005.) The fundamental tenets of air power that I learned, which are still taught today, speak of decisiveness. They promise that air power, defined as “flexible and versatile,” will have “synergistic effects” with other military operations. When bombing is “concentrated,” “persistent,” and “executed” properly (meaning not micro-managed by know-nothing politicians), air power should be fundamental to ultimate victory. As we used to insist, putting bombs on target is really what it’s all about. End of story — and of thought.

Given the banality and vacuity of those official Air Force tenets, given the twenty-first-century history of air power gone to hell and back, and based on my own experience teaching such history and strategy in and outside the military, I’d like to offer some air power tenets of my own. These are the ones the Air Force didn’t teach me, but that our leaders might consider before launching their next “decisive” air campaign. 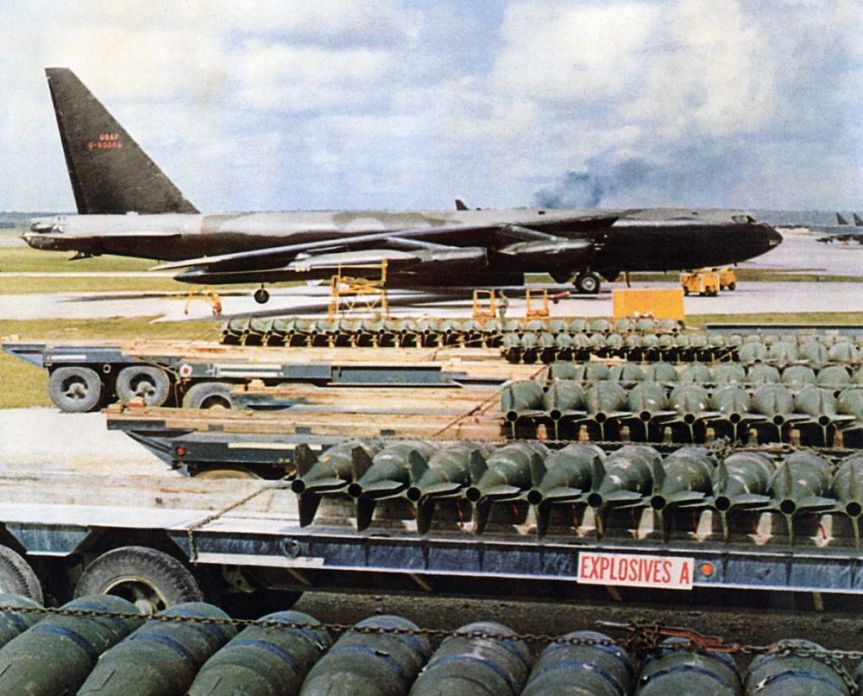 Consider, for instance, the “decapitation” strikes launched against Iraqi autocrat Saddam Hussein and his top officials in the opening moments of the Bush administration’s invasion of 2003. Despite the hype about that being the beginning of the most precise air campaign in all of history, 50 of those attacks, supposedly based on the best intelligence around, failed to take out Saddam or a single one of his targeted officials. They did, however, cause “dozens” of civilian deaths. Think of it as a monstrous repeat of the precision air attacks launched on Belgrade in 1999 against Slobodan Milosevic and his regime that hit the Chinese embassy instead, killing three journalists.

Here, then, is the question of the day: Why is it that, despite all the “precision” talk about it, air power so regularly proves at best a blunt instrument of destruction? As a start, intelligence is often faulty. Then bombs and missiles, even “smart” ones, do go astray. And even when U.S. forces actually kill high-value targets (HVTs), there are always more HVTs out there. A paradox emerges from almost 18 years of the war on terror: the imprecision of air power only leads to repetitious cycles of violence and, even when air strikes prove precise, there always turn out to be fresh targets, fresh terrorists, fresh insurgents to strike.

The Road to Perdition

If I had to reduce these tenets to a single maxim, it would be this: all the happy talk about the techno-wonders of modern air power obscures its darker facets, especially its ability to lock America into what are effectively one-way wars with dead-end results.

For this reason, precision warfare is truly an oxymoron. War isn’t precise. It’s nasty, bloody, and murderous. War’s inherent nature — its unpredictability, horrors, and tendency to outlast its original causes and goals — isn’t changed when the bombs and missiles are guided by GPS. Washington’s enemies in its war on terror, moreover, have learned to adapt to air power in a grimly Darwinian fashion and have the advantage of fighting on their own turf.

Who doesn’t know the old riddle: If a tree falls in the forest and no one is there to hear it, does it make a sound? Here’s a twenty-first-century air power variant on it: If foreign children die from American bombs but no U.S. media outlets report their deaths, will anyone grieve? Far too often, the answer here in the U.S. is no and so our wars go on into an endless future of global destruction.

In reality, this country might do better to simply ground its many fighter planes, bombers, and drones. Paradoxically, instead of gaining the high ground, they are keeping us on a low road to perdition.