The Perils of Financialization

28 May 2019 – Lyndsey Jefferson speaks with Matthew Oxenford about the enduring risks of the financial sector in the global economy and how the mistakes of the 2008 financial crisis continue to resonate. 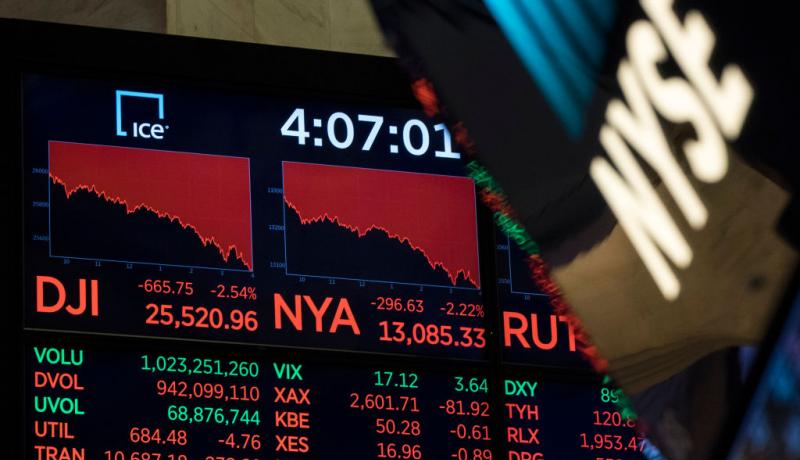 A monitor displays the day’s final numbers on the floor of the New York Stock Exchange at the closing bell on 2 February 2018. Photo: Getty Images

Lyndsey: Financialization – it’s a bit of a buzzword, but what does it actually mean?

Matthew: In the most general sense, it means that financial services are taking up a larger and larger portion of the global economy. There are really two different types of financialization if you want to talk about this broadly.

The first type is where this is happening across the world in countries like China and India. China is probably the biggest example. The financial system there basically didn’t exist in any sophisticated way 20 or 30 years ago, so some of the basic functions of finance are now being developed. There are more reliable stock markets, institutional investors, et cetera. And that’s generally considered good because there are legitimate functions that the financial sector performs.

The other side is what has happened in advanced economies since about 1980. This is a lot more questionable as to whether the increase in the size of the financial sector is adding real value to the economy. There are some people who will advocate for it and say that it creates more efficiency in the market overall and better allocation of resources to the companies that can use it.

But if you look at some of the particular features of the modern economy – large corporates are holding huge amount of cash and small businesses are really not. Some small businesses are scaling in the tech sector, but generally you don’t see the huge sort of expansion in small business growth that you might expect to develop innovative ideas. Also, growth has been slow in general since the financial crisis. It makes you ask whether or not the financial sector has the optimal allocation of capital in the economy to encourage growth.

What role have state policies of deregulating finance played in getting to this point?

When you go back to the 1980s, you have the Big Bang in London which created a lot of space for big new investment in the London financial centre. In the US, Ronald Reagan and even more recently Bill Clinton championed significant deregulation of the financial sector there.

There is a connection especially to the breakdown of the divide between retail and investment banking, which in the US was put up after the Great Depression, because the amount of money that is available to banks through their retail deposits is significant. If that’s being used to engage in risky transactions on the wholesale side, that increases systemic risk, but also gives you more value if you believe the transactions are increasing the efficiency of the economy. Once that happened, it led to a massive increase in deregulations in the financial sector.

The other thing is that there has been a significant cultural change in finance, especially in the UK and US. To paint a very broad brush, it used to be that bankers were generally affluent, would know their clients and would not look to maximize their transactions. The whole idea of ‘bankers’ hours’ being 10am–3pm was an artefact of that time.

Now, banking has gone completely the other way. There are a lot of people looking to make as much money as they can and not looking to the long term in how they manage their institutions. Instead, they are trying to maximize their own profit. The short-termism that’s come up in the last 20 years has been part of the reason why a lot of people would say the financial sector has been taking a lot more risks which has led to a lot more catastrophic failures.

Do you think the G20 countries have learned the lessons from the financial crisis of 2008? Has the recovery been strong enough to prevent another crash?

After the financial crisis, the G20 countries created the Financial Stability Board to completely look at the issues of systemic risk, ‘too big to fail’, and interconnectivity of the banking system. They’ve done a fair bit on increasing capital requirements and developing procedures for cross-border supervision. Whether that’s enough to withstand a crisis, we won’t know until there is a crisis.

To use a very banal example, the idea that housing prices will never go down, that there might be significant systemic risk locked in the housing market, is now something that is much more in the front of mind than it was in 2007 when otherwise very intelligent people assumed that the housing market would just continue to rise.

That being said, there are a lot of areas where the financial sector has not been cleaned up since 2008. The eurozone in particular, in Italy and some of the southern European economies, still has incredibly high numbers of non-performing loans on the books. Across the eurozone, including in countries that weren’t badly hit, the figure is near 5 per cent. In Italy and Greece, it’s much higher.

The other issue around what the proper role of the financial sector in the real economy is – that’s still an open question and is being contested much more. Generally, the view of the regulators in the immediate aftermath of the financial crisis was to keep the system from melting down and to shore it up so that it can withstand another beating, but not to completely rethink the underpinnings of it.

How can the financial system be fixed?

I think that goes back to what I was saying in the beginning, that there are legitimate functions of the financial system. The ones that are usually put forward are issues of hedging against risk (insurance), allocating risk to people who want to take it (investment) and aggregating and allocating capital. Other examples include smoothing consumption across time, so that someone who is young can save so that they can spend down their retirement when they’re old, and doing the due-diligence to ensure that good ideas get funded and bad ideas don’t get funded.

A lot of what’s going on in the financial sector right now creates a huge amount of money for the people doing it but doesn’t fall easily into any of those categories. Generally, the financial sector justifies this by saying that this creates value somehow and because it’s the free market, they wouldn’t be making these trades if there wasn’t some value created. This is a somewhat dubious proposition.

If you look at how GDP in the financial sector is measured, most transactions aren’t a one-for-one, I give you this product and you pay me this amount of money. It’s estimated from what the prevailing interest rates for credit would be without the financial sector and uses the spread to say where the value-add is. And that’s very difficult to parse. There is a lot of criticism about whether or not that actually is real value added to the economy or if it is just shuffling around gains that came from elsewhere.

How has the financial crisis played a role in shaping the current political climate?

If you look at popular attitudes, the financial crisis was one of the watershed moments in the last 25 years. Particularly in the US and UK, there was this sense that the financial sector was fixed. Supposedly, in finance, if you win, you make a lot of money, if you lose, you lose your job, your opportunities, all of that. Because they were so systemically engaged and so systemically important, that didn’t happen. And nobody has really fixed that, and it does create this impression that the system is rigged.

You see a lot of people on the left, like Bernie Sanders and in particular Elizabeth Warren, leaning into that quite a bit. But even on the right, there is that sense that the government and the political system aren’t looking out for the people.

I think the response to the financial crisis was as big of a problem as the crisis itself. Instead of developing massive public works, jobs or welfare programmes, there was a turn towards austerity in most countries.

Compare that to the treatment that the banks got. The major tool for addressing the financial crisis was quantitative easing, which was the central banks buying up massive financial assets and the owners of those assets having their portfolios artificially inflated. The way that governments and central banks tried to reflate the economy in the years after the crisis was very tilted towards the wealthy and that didn’t go unnoticed.

Even at the time you had the Occupy movement in the US and the 15-M anti-austerity movement in Spain. Now that the economy is somewhat more recovered, austerity has come out of fashion. You have massive deficit spending in the US, and even the Conservatives in the UK have moved away from the austerity agenda. The right-wing parties that are now becoming more prominent aren’t promising austerity. Even though they are on the cultural right, generally they are economically to the left of the right-wing parties that came before.