Operation Car Wash prosecutors followed Judge Sergio Moro’s advice in order to “bring comfort to the judge and take the lead to protect him.” 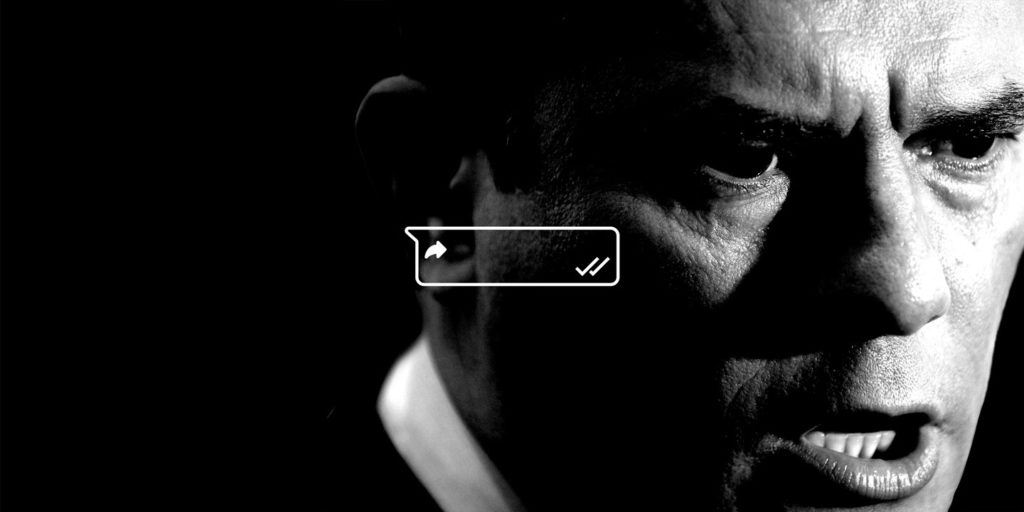 ·         Part 1: How and Why the Intercept Is Reporting on a Vast Trove of Materials about Brazil’s Operation Car Wash and Justice Minister Sergio Moro – 9 Jun 2019

17 Jun 2019 – Brazil’s Justice Minister Sergio Moro, while serving as a judge in a corruption case that upended Brazilian politics, took to private chats to mock the defense of former Brazilian President Luiz Inácio Lula da Silva and direct prosecutors’ media strategy, according to newly unearthed chats from an archive obtained by The Intercept Brasil.

The new revelations, which were published in Portuguese by The Intercept Brasil on Friday, have added fuel to a weeklong political firestorm in Brazil. The country’s largest circulation newspaper, Folha de São Paulo, said the reporting suggests that officials “ignored the limits of the law,” while UOL, a news website, said jurists view the revelations as “grave.” The site quoted the head of a national criminal law association saying, “This is unthinkable in any democracy. It’s scary.”

In the newly revealed chats with a senior prosecutor — a member of the team working on the Operation Car Wash corruption case — Moro said, “Maybe, tomorrow, you should prepare a press release” to point out inconsistencies in Lula’s arguments, adding, “The defense already put on their little show.”

“You should prepare a press release explaining the contradictions between his testimony and the rest of the evidence or with his previous testimony. After all, the defense already put on their little show.”

Moro’s advice was a major deviation from their previous communications strategy, but prosecutors did as he asked — further evidence of bias and unethical collaboration between the two parties in the case that sent Lula to prison on corruption charges, making the most popular politician in Brazil ineligible to run in the 2018 presidential election.

The newly published chats come from an archive of documents, provided to The Intercept Brasil by an anonymous source, which includes years of private communications from the prosecutorial task force responsible for the Car Wash case, the largest anti-corruption investigation in Brazilian history.

Last weekend, The Intercept published explosive group chats between Car Wash prosecutors and conversations between task force coordinator Deltan Dallagnol and Moro, showing that the then-judge and the prosecutors were unethically and inappropriately collaborating in secret. Despite repeatedly insisting in public that they were acting ethically and impartially, the chats revealed that the judge was passing on advice, investigative leads, and inside information to the prosecutors — who were themselves plotting to prevent Lula’s Workers’ Party from winning last year’s election.

Lula, who had been the far and away favorite in election polls, was rendered ineligible by his conviction, and instead the far-right candidate Jair Bolsonaro handily won over Lula’s replacement. Lula has maintained that he was not granted a fair trial. Moro is now Bolsonaro’s justice minister.

In an interview on Friday with the Estado de São Paulo newspaper, Moro said, “The Brazilian legal tradition does not prevent personal contact and such conversations between judges, lawyers, detectives, and prosecutors.” This type of communication is “absolutely normal,” he added. However, the chats published by The Intercept Brasil show that the communication went far beyond “personal contact” and “conversations” to include directives as to how the prosecutors should operate inside and outside of the courtroom.

The Car Wash task force refused to comment on the contents of this story. In a statement, Moro declined to speak to the substance of this article, but said, “The Minister of Justice and Public Security will not comment on alleged messages from public authorities collected through criminal invasion by hackers and that may have been tampered with and edited, especially without prior analysis by independent authorities that can certify their integrity. In the case in question, the alleged messages were not even sent previously.”

Despite repeatedly using the phrase “alleged messages,” Moro acknowledged the authenticity of at least one of the conversations this past Friday. Questioned during a press conference about having passed on an investigative lead to prosecutors on December 7, 2015, Moro said it was an “oversight on my part.” 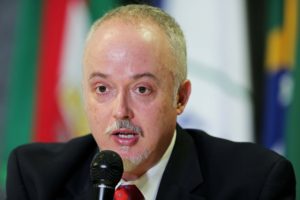 Prosecutor Carlos Fernando dos Santos Lima talks about the 26th stage of the Lava Jato operation, called Xepa, during a press conference at the Superintendency of the Federal Police in Curitiba, Brazil, on March 22, 2016.
Photo: Heuler Andrey/AFP/Getty Images

“The Defense Already Put on Their Little Show”

“What did you think?” It was 10:04 p.m. on May 10, 2017, and then-Judge Sergio Moro was using the Telegram messaging app to talk with Carlos Fernando dos Santos Lima, a senior prosecutor in the Operation Car Wash task force. Moro had just wrapped up one of the most important days of his career and was looking for feedback.

In a modest courtroom in the city of Curitiba, Moro had deposed Lula for more than five hours, as thousands of the former president’s supporters protested outside. Later that day, video recordings of the unusual proceedings — unusual because former presidents are rarely tried on corruption charges and also because judges don’t usually interrogate the accused for hours on end — were released to the public. Less than a year later, Moro would sentence Lula to more than nine years in prison for receiving a beachfront triplex apartment as a bribe for facilitating contracts with the state-run oil company Petrobras. But, for the moment, the judge was concerned about how the public was receiving the news about his interrogation of Lula.

“I thought it went really well,” Santos Lima, the prosecutor, responded. “He started antagonizing us, which gave me some peace of mind. He contradicted himself in small details and didn’t answer a lot of things, this is not well understood by the public. You starting with the Triplex left him uneasy.” The conversation continued:

Moro – 22:11 – The communication is complicated, because the press does not pay much attention to details.

22:11 – And some of them expect something conclusive.

22:12 – Maybe, tomorrow, you should prepare a press release explaining the contradictions between his testimony and the rest of the evidence or with his previous testimony

22:13 – Since the defense already put on their little show.

Santos Lima – 22:16 – I won’t be here tomorrow. But the most important thing was to block the idea that he would be able to turn everything into his persecution.

Ten minutes after his last message to Moro, Santos Lima sent a request in the “clippings analysis” group chat, used by prosecutors to coordinate media strategy and monitor coverage together with two press aides:

Santos Lima – 22:26:23 – Do you think we can book an interview with someone from Globo in Recife tomorrow about today’s hearings?

Press Aide 1 – 22:28:19 – It’s possible, but I’m not sure if it’s worth it. What about all the journalists here that already asked for an interview?

Santos Lima – 22:30:50 – Just something I need taken care of. How’s the repercussion of the lawyers’ press conference?

Press Aide 2 – 22:30:58 – Typical procedure…you never gave interviews about the hearings…it will give reason for the defense to attack…once again…

The press aide’s surprise and confusion over the request demonstrates that Moro was suggesting a dramatic shift in the Car Wash prosecutors’ typical communications strategy. Up until that point, they had not been in the habit of commenting publicly on the trial proceedings.

Santos Lima then forwarded his exchange with the judge to Car Wash coordinator Deltan Dallagnol, who responded in a group chat with other prosecutors:

Dallagnol – 22:46:46 – So, we need to take into account the following points: 1) create comfort for the judge and take the spotlight to give him more protection and to shift the focus away from him; 2) to counterbalance the defense’s show.

22:49:18 – And the format, I agree, would have to be a press release, for protection and risk reduction. JN will still explore this tomorrow. If we do this, we would have to work intensely on this during the day to release it around 4 p.m.

Minutes later, Dallagnol chimed in to reinforce Santos Lima’s request in the chat with the press aides , and the second press aide reiterated their objections more forcefully:

Press aide 2 – 23:15:30 – Those who attack us will keep attacking us. Those who don’t will notice a change in behavior and will question it. It’s part of the process. The way I see it, it’s issuing an opinion about the case before its conclusion… and creating an opening to say that you are trying to influence the judge. Their role will be to make this a political issue. The press knows this. And they already know that you don’t usually talk about the hearings. Changing your behavior will create the opportunity to raise other questions. Why did you decide to talk now? Because it was the ex-president? And bring back the narrative of persecution… it is what the defense did, does… because there is no way to refute the accusation. For the prosecution to use the same strategy might be shooting yourself in the foot.

Dallagnol also messaged Moro to congratulate him on his performance in court that day and discuss the judge’s suggestion: “Congratulations on keeping control of the hearing in such a serene and respectful way. We are pondering an eventual statement. GN [Globonews] just showed a series of contradictions and evasions. We’re keeping track.”

Moro again suggested that the prosecutors consider issuing a statement to the press. He said, “OK. I also have my doubts about the pertinence of a statement, but we should think about it due to the subtleties involved.”

Under the Brazilian judicial system, the judge and the prosecution are required to operate independently to ensure a fair trial. However, in this case, Car Wash prosecutors spent hours crafting a communications strategy at the judge’s suggestion in order to, in the words of their leader, “comfort the judge.”

The following afternoon, the Car Wash prosecutors put out a statement attacking Lula’s arguments and using the exact word Moro had suggested: contradictions. “As for the many verified contradictions in the questioning of ex-President Lula,” read the statement. “[T]he Federal Public Prosecutor will address this in due course, during the trial, particularly during closing arguments.”

Santos Lima, the first prosecutor to receive Moro’s suggestion to speak out about the “contradictions” in Lula’s defense, did an interview with Estado de São Paulo’s “Broadcast Político” podcast, in which he said he did “not see any consistency” in Lula’s claims and defended Moro in response to the former president’s criticisms.

Later that night, 24 hours after Moro’s initial suggestion, Dallagnol messaged the judge to inform him that they had submitted a petition “more for strategy” that was “not essential” and that the judge “should feel free, it’s unnecessary to say, to deny” the request. He then went on to summarize their media strategy for the day. Brazil’s biggest nightly news program, “Jornal Nacional,” had just read their statement live on air:

Dallagnol – 22:16:26 – I also want to inform you that we discussed it since yesterday, over the course of the entire day, and we understand, unanimously and along with our press secretary, that the media was covering the contradictions well and that if we spoke out about it, it could make things worse. We passed along some relevant [points] to journalists. We decided to make a statement only addressing the false information, saying that we will focus on other contradictions in the closing arguments.