Ruth Ebenstein – The Times of Israel

The day a conference on peace journalism crashed a yoga class in a safe room during a missile strike. 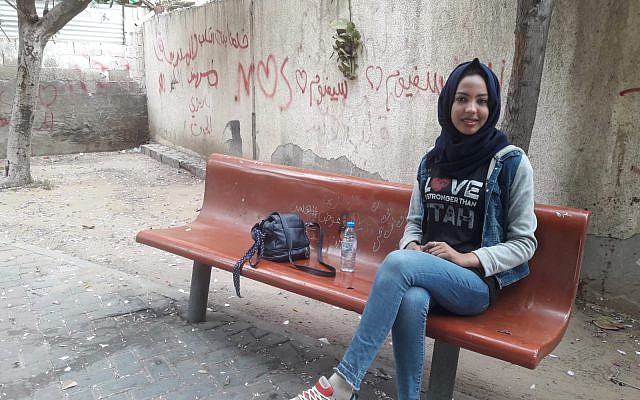 Hedaya, 21, takes a breather while engaging in the “Love is Stronger than Hate” campaign on the streets of Gaza City.  (Courtesy)

3 Jun 2019 – I was sitting alone at a seminar in Peace Journalism on the outskirts of Jerusalem, trying to decide how to frame my article on peace activism in Gaza. Should I highlight the “Love is Stronger than Hate” campaign that featured peace activists walking the streets of Gaza City clad in t-shirts bearing this message and engaging in gestures of good will? Or should I cover the upcoming “From Gaza to America” program scheduled to kick off with Skype conversations during Ramadan between Gazan peace activists and Americans, which was slated to begin in early May? 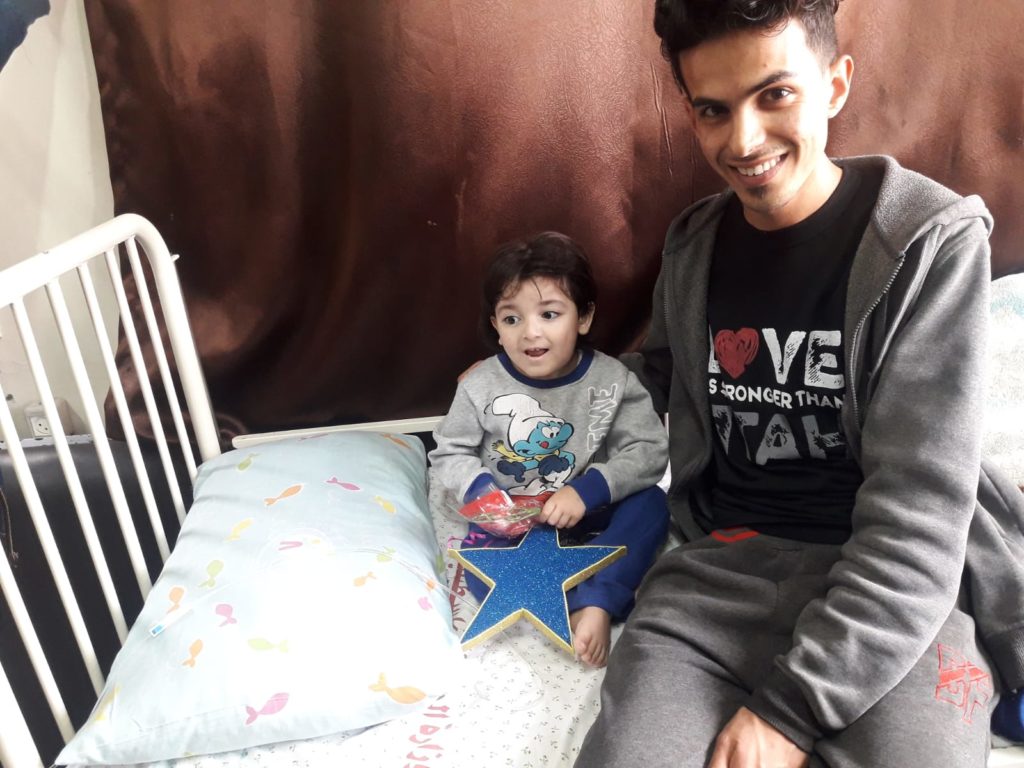 Abed Al-Rahman, 23, visits a baby in the hospital and shares a homemade star of love and kindness.
(Courtesy, Rami Aman) 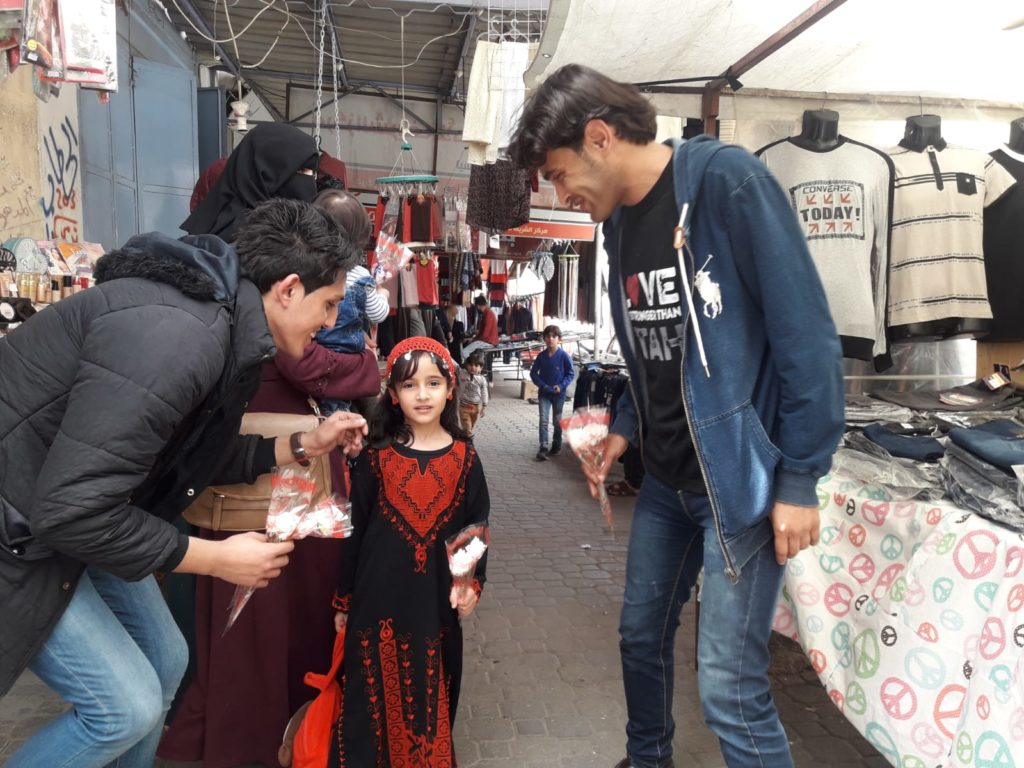 I’d spent the morning listening to presentations of the Israeli narrative and the Palestinian narrative of the Israeli-Palestinian conflict in a location that served as a fitting refuge from the ongoing backdrop discord and dispute. I’m an American-Israeli journalist and peace activist, and I was one of some forty Jewish and Palestinian/Arab Israelis gathered for a two-day workshop at Neve Shalom Wahat al-Salam, the only binational egalitarian community of Jewish and Palestinian-Arab citizens of Israel, located on one of the two Latrun hilltops overlooking the Ayalon Valley, a 30-minute car ride from Jerusalem. It felt like the perfect surroundings in which to hone our skills in reporting stories that promote peace. There was tasty food, stimulating conversation, a cool breeze. The sun shone brightly on lush green lawns and fluted flower beds. My mind percolated with the buzz of media talk with an array of inspiring writers and activists. 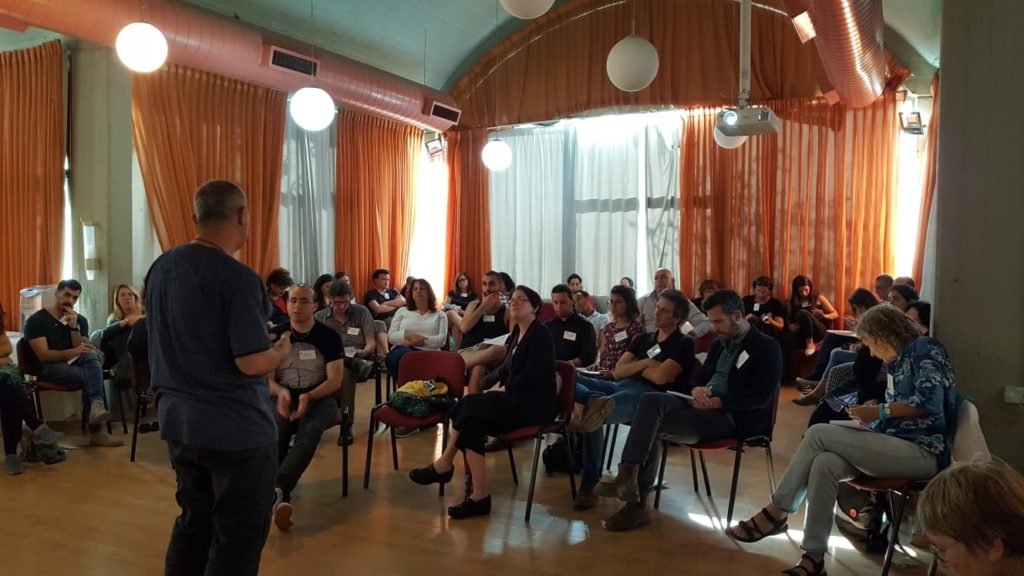 Participating in the ‘Media Impacting Conflict Transformation: From Local Action to Cross-border and Global Outreach’ conference, sponsored by the Adam Institute and Social TV.  (Yolanda Greenhut)

Then I heard an unsettling sound.

A pitch rising and falling in the distance interrupted my thoughts. What was that vaguely familiar muffled noise? Heavens! It was the blaring of a siren of an anti-missile defense system, a rocket warning in the form of a screech, the haunting wail of a banshee.  I live in Jerusalem, where these sirens are rare. I hadn’t heard one since Operation Protective Edge, the Israel-Gaza War of 2014, when the rockets of the conflict reached the capital. Because I observe the Jewish Sabbath and refrain from all technology, I had no idea that a fussilage of rockets from Gaza had barraged across Southern Israel that morning. By late afternoon, Hamas and Islamic Jihad had launched some 150 rockets from Gaza at Israel.

The jarring attack sliced into my serene and sunny Sabbath. My morning had opened with stillness and birds chirping under a cloudless sky. The air bloomed with fragrant red roses. I’d said the morning prayers quietly to myself and after breakfast, explored the neighborhood. In a corner along a nearby driveway, a homeowner had engraved quotes from Palestinian writer Mahmoud Darwish. The view overlooking the valley was verdant, captivating.

“It’s a siren!” yelled one of the participants. “Where’s the secure room?”

It was hard not to be struck by the incongruity of what we were studying — how to present the Israeli-Palestinian conflict in a manner that brings the sides closer together — and the sudden interruption of a rocket. We had begun brainstorming in a multi-purpose room, not far from Neve Shalom’s signature School for Peace. That oasis provided an inviting backdrop for this meaningful conversation.

Now we were running away from war. We hustled down the stairs into the sheltered area, which in these parts is called the MAMAD, a Hebrew acronym for merkhav mugan dirati, a reinforced security area that protects against projectiles and chemical weapons. We hurried into that multi-purpose room with low ceilings and discovered — surprise — that we had crashed a yoga class. Barefoot women and men stretched on black, green and turquoise yoga mats. The room was sweetened with incense. As my eyes flitted around the room, I caught small framed photos of yogis arranged on a table, surrounded by tea lights in glass jars. As we all waited for the requisite boom, a signal of an all-clear, one yogi nonchalantly climbed on to the folded legs and bare feet of her partner and balanced herself on her backside, delicately in the air.

Yoga in the MAMAD, a reinforced security area that protects against projectiles and chemical weapons – and during the air raid siren.
(Courtesy, Dafi Shoval)

Had they heard the siren? Had it rattled them? I wasn’t sure. But surely they knew, as I did, that those rockets aimed to kill.

Ten minutes later, it became clear that it was probably an isolated missile strike. We returned to our seats in the very large circle and collected ourselves. Bedouin members of our group who had grown up near the Gazan border shared the lack of protection in both recognized and unrecognized Bedouin villages. Where we come from, residents position their cameras to capture the moments on film, they quipped. There are no secure rooms in which to seek refuge! And some remote villages are not even within earshot of the warning sirens. You want to tell yourself that these things don’t kill people, but you know that’s not true.

The seminar’s agenda was to motivate participants to tell stories that promote connections across the divide. We felt that acutely; the immediacy and urgency of doing so was ever more palpable.

And so we jumped right in. People threw out their ideas. An article on the dearth of special-needs education in the Arab sector. Feminism in Islam and the Koran. The complexity of home demolitions in the Arab sector. Arabic language instruction in the Israeli education system. The unknown beauty of Jisr Az-Zarqa, the only remaining Arab town on the Mediterranean Sea, just north of Caesarea.  And so on.

As we got up to leave, my eyes lingered on the program’s title: “Media Impacting Conflict Transformation: From Local Action to Cross-border and Global Outreach.” Complex language to capture something quite simple: peace journalism. 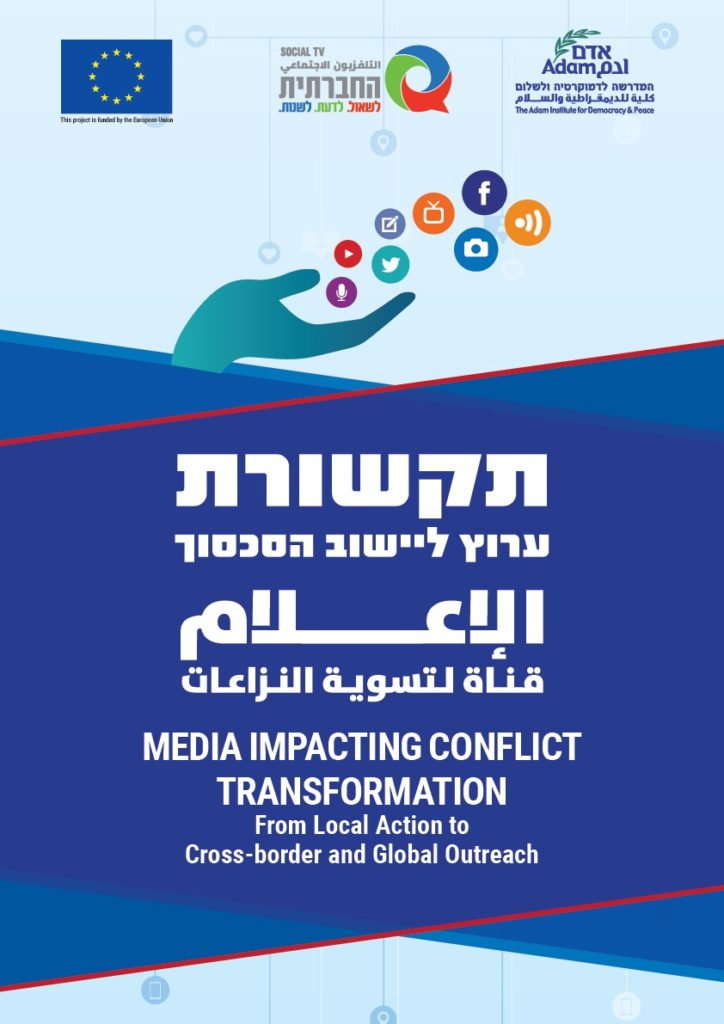 Whereas war journalism reports difference rather than similarity, “peace journalism” layers the “us” and “them” with additional elements, explained Dr. Uki Maroshek, academic director of The Adam Institute for Democracy and Peace. The institute had designed and organized the program together with Israel Social Television, an independent media NGO promoting social change via video content, dissemination and media training for social activists. “Rather than focusing on what we have, peace journalism focuses on what we need to have, what ought to be.”

My thoughts wandered to the subject matter of my article — Rami Aman, my friend, the Gazan peace activist, and founder/director of Gaza’s Youth Committee, a burgeoning project to empower young Gazans to tackle local issues and promote peace. And his colleagues: Fatma Mohammaden, Manar al-Sharif, Mohammed Safi, Waseem Ali, Hedaya Alzanoun, and others. Were they safe? What about my Jewish Israeli friends living in Southern Israel who had fielded a missile storm? How was Jen faring in Beer Sheva with a newborn and two other little ones? What about Leora in Ashkelon, who was probably walking to synagogue, pushing her 1-year-old in the stroller, when the shower of morning missiles struck? When rockets rained down during a different violent flare-up last November, my phone buzzed with videos of explosions sent by friends from both sides. I would have to wait until after Shabbat to get answers. 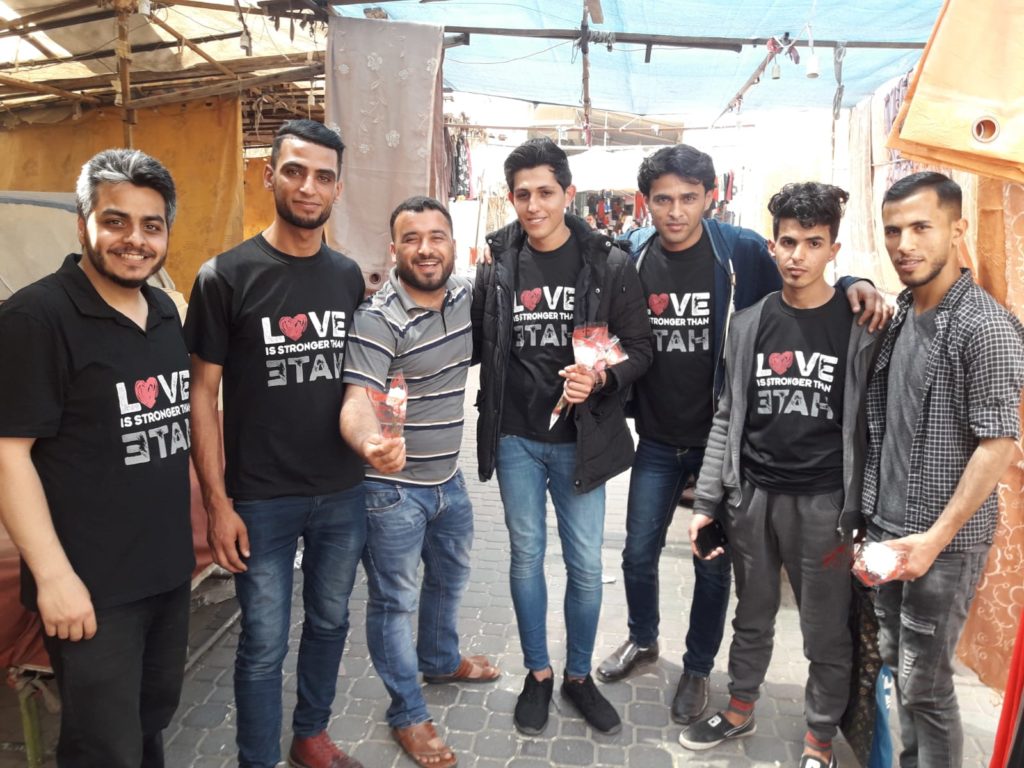 After the three stars shone in the sky, marking the end of Sabbath, I turned on my cell phone. How had everyone down south fared? Gustavo Surazski, Leora’s husband, a Conservative rabbi at Kehillat Netzach Yisrael in Ashkelon, shared on Facebook the uplifting celebration of a bat-mitzvah in the anti-aircraft shelter. “Despite the unprecedented situation, the feeling in the shelter was electrifying and the experience unforgettable. Without fear, we stood as a congregation, singing, clapping and blessing. When the morning attack ended, we returned the Torah to the Aron Hakodesh (Ark) in joyful procession.” He even posted photos, snapped on the Sabbath despite the prohibition, given the circumstances. 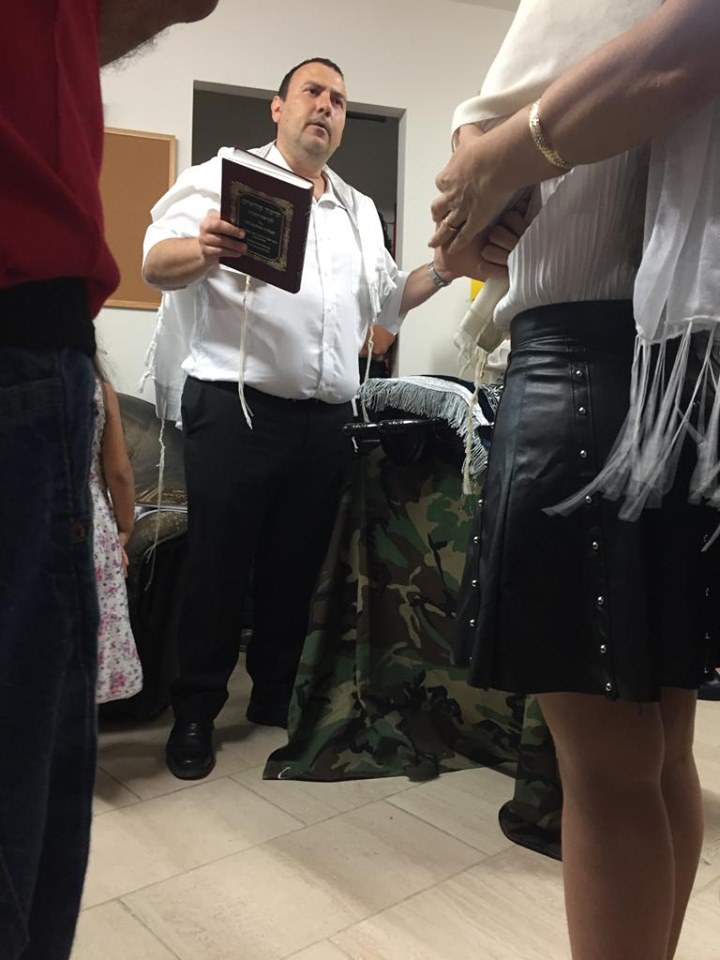 And from Gaza, my phone related a similar celebration of life. That very same Saturday, while rockets were fired from Gaza, Rami and his team had gone out to film the “Love is Stronger than Hate” campaign, inspired by a partnership with a foundation in NY. Hot off the press, Rami forwarded me the video via WhatsApp. P. J. Pacifico’s catchy tune, Love Is Stronger than Hate, bubbled out of my phone, elevating the mood. In the opening shot, a Gazan peace activist picked up garbage from empty sand and planted a small flowering white plant. Then photos of peace activists visiting children in a Gazan hospital, passing out flowers and homemade stars of hope. There are those who might deem these lyrics hokey. In the current circumstances, they resonated as poignant and timely. Even true.

Love Is Stronger Than Hate

How had Rami managed to film this video amidst the latest flare-up of violence? Knowing that the next one was around the corner? Amidst the messiness of real life, Rami’s unflinching commitment to peace, good will and education for democracy stood out like a beacon of light.

If during these dark and violent days Rami could fearlessly disseminate a message that “Love Is Stronger than Hate,” who was I to disagree?

It was a story that had to be told. So there you have it: I just did. 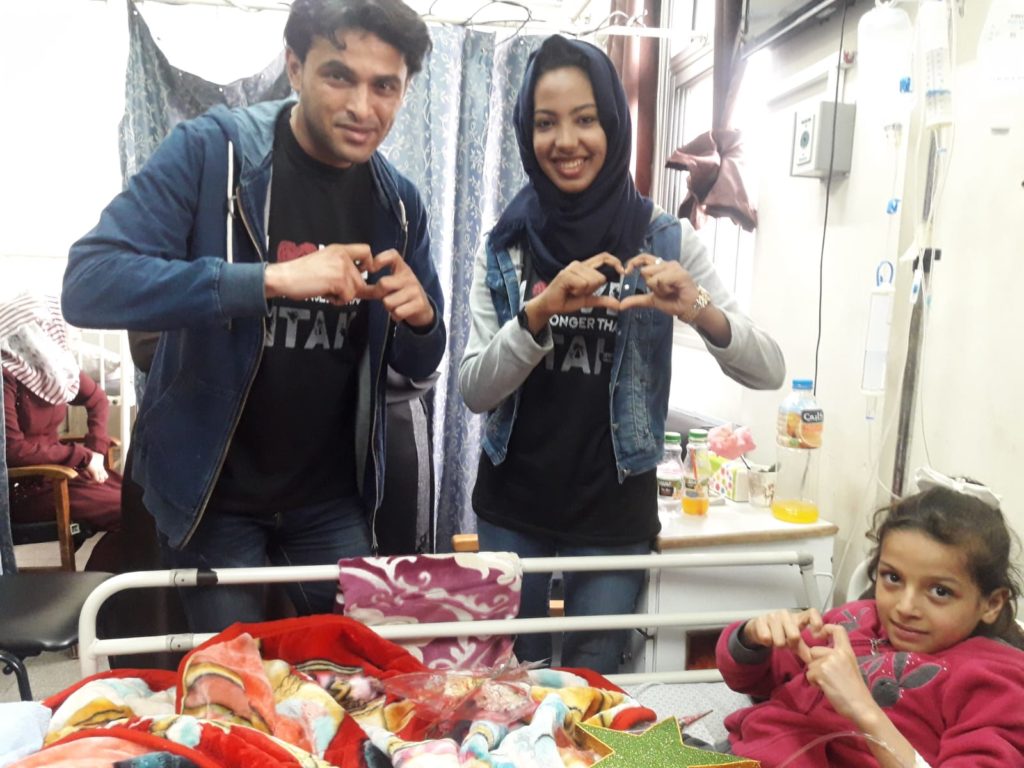 Rami, Hedaya, and a little girl visiting a girl in the hospital.
(Courtesy, Rami Aman)

Ruth Ebenstein is an award-winning American-Israeli writer, historian, public speaker, and health/peace activist who loves to laugh a lot–and heartily. She is the author of the forthcoming book, Bosom Buddies: How Breast Cancer Fostered An Unexpected Friendship Across the Israeli-Palestinian Divide. She is also the author of All of this country is called Jerusalem and has written two teleplays for children, Follow that Goblin and Follow that Bunny. Her writing has appeared in the Atlantic, Washington Post, Los Angeles Review of Books, Tablet, WomansDay.com, Good Housekeeping, Triquarterly, CNN, USA Today, the Forward, Stars and Stripes, Education Week, Brain, Child, Fathom, and other publications.