When Secular Israelis Claim “God Gave This Land to Us” 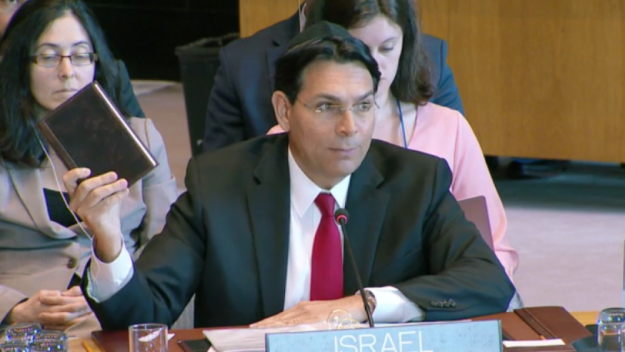 23 May 2019 – Israeli Ambassador to the UN, Danny Danon, created something of viral sensation last week when, during a speech in the Security Council, he dramatically brandished a Bible and declared,

“This is the deed to our land.”

From the book of Genesis; to the Jewish exodus from Egypt; to receiving the Torah on Mount Sinai; to the gates of Canaan; and to the realization of God’s covenant in the Holy Land of Israel; the Bible paints a consistent picture. The entire history of our people, and our connection to Eretz Yisrael, begins right here.

Danon’s use of an ancient religious text as justification for the State of Israel’s right to the land was likely an astonishing moment for many. What on earth was a secular Israeli doing lecturing the UN on “God’s covenant in the Holy Land of Israel?” For those familiar with Zionist pedagogy however, his comments were neither unusual nor unprecedented.

When I heard about Danon’s Biblical tutorial, I immediately recalled a famous story about a 1937 meeting between David Ben-Gurion and Lord Peel, who was then heading the British Royal Peel Commission of Inquiry into the potential partition of Mandate Palestine. According to the story, Lord Peel asked Ben-Gurion where he was born and Ben-Gurion replied that he was from Plonsk, Poland. Lord Peel responded that the Arab leaders with whom he had met were all born in Palestine and most of the Jewish leaders were from Eastern Europe. Peel noted that the Arab people had a kushan (Ottoman land deed) that entitled them to the land – and asked Ben-Gurion if he also had a document that proved the land belonged to him.

At that point, Ben-Gurion became aware of the Bible upon which he had just sworn as a commission witness. He grabbed it, held it up and exclaimed, “Here is your kushan. It is the world’s most highly respected book and I believe that you British regard it with much respect too. We must have this land!”

This phenomenon – that of otherwise secular Israeli Jews proclaiming “God gave this land to us” – is not particularly uncommon. It is actually rooted in the unique form of nationalist ideology that gave rise the state of Israel. If we are to grasp this mentality properly then, we must first understand the early ideological trends that motivated Israel’s original settlers and eventual founders.

Many scholars have pointed out that Zionists – particularly those from Russia and Poland – were markedly influenced by the ideas of European Romantic nationalism (also known as “ethnic nationalism,” “organic nationalism” or “integral nationalism”) an intellectual movement that spread across Europe in the mid-19th century. The early seeds of this ideology were planted in the ideas of Rousseau, Hegel and particularly the German philosopher Johann Gottfried von Herder, who posited that “each nation is separate, distinguished by climate, education, custom, tradition, and heredity.”

These ideas were a powerful part of the ideological fabric of 19th century Europe from which Zionism emerged. In his book “The Founding Myths of Israel,” Israeli historian Zeev Sternhell notes that “Herder’s thinking had tremendous importance in Eastern Europe” during the 19th century and that these ideas were formative for important Labor Zionists such as A.D. Gordon, Berl Katznelson and David Ben-Gurion. Sternhell’s work compellingly demonstrates how otherwise secular socialists could espouse an ideology that articulated a deeply spiritual – and at times almost mystical connection of the Jewish people to land, history, language and ritual:

A cultural-organic conception of the nation necessarily included religion, which it saw as an inseparable part of national identity. This was the case in Eastern Europe, but also in Western Europe, in France and Spain. French integral nationalism was no less Catholic than Polish nationalism, and religion played the same role in it as it did in Poland or Romania. It was a focus of unity and identity, over and beyond social divisions. In integral nationalism religion had a social function, unconnected with its metaphysical content. Generally, it was a religion without God; in order to fulfill its function as a unifying force, religion required only external symbols, not inner content (p. 56, emphasis mine.)

In other words, the settlers and eventual founders of the Jewish state instrumentalized religion, emphasizing its social function to unify the people under one national identity. Indeed, the idea of a “religion without God” can be clearly discerned in the words of many pivotal Zionists. Thus Gordon, the father of Labor Zionism, could in one breath excoriate traditional Judaism with incredible vehemence while claiming that “the greatness of nationalism is its cosmic dimension” (p. 62). Sternhell also describes the venerable Labor Zionist figure, Berl Katznelson, as “a kind of secular rabbi whose strength lay in a direct contact with a sect of believers” (p. 135).

As my anecdote above demonstrates, Ben-Gurion’s world view was also deeply motivated by this mindset. Decades after lifting a Bible before Lord Peel, Ben-Gurion famously convened a study group of archeologists, academics and military officers to read and discuss the Biblical book of Joshua. It was well known that Joshua, which describes the Israelite conquest of Canaan in vivid detail, was Ben-Gurion’s favorite book of the Bible. In keeping with the ways of Romantic nationalists, he considered the Bible to be the Jewish people’s “national epic,” connecting them to a glorious ancient past as well as the a justification for their contemporary settlement of the land.

Similar to other national movements, Zionism appealed to the glories of an ancient past and brought biblical words and phrases into spoken Hebrew. The Hebrew Bible served as a linguistic source and literary template in the prestate Yishuv and early decades of the State of Israel…

Ben-Gurion saw the biblical war narrative as constituting an ideal basis for a unifying myth of national identity. Not only could modern Israelis relate to the processes of conquest and settlement, but through the prism of Joshua they could also understand them as reenactments of the biblical past (“The Joshua Generation: Conquest and the Promised Land ” p. 309.)

The use of the Bible as national epic was not the exclusive provenance of Labor Zionists. Zeev Jabotinsky, the founder of Revisionist Zionism (the ideology of the present-day Likud party) wrote the 1927 novel, “Samson the Nazirite,” which portrays Samson as a Jewish national hero. Though Jabotinsky was a passionate opponent of Labor Zionism, he and his socialist Zionist compatriots clearly shared a deep attachment to the trappings of Romantic nationalism.

Since the founding of the state (when the Bible was invoked in its Declaration of Independence), these romantic mythic narratives have since exerted an indelible hold over Israeli socio-political culture. Well before Danon’s UN pronouncement one could choose from a myriad of examples. To offer but one more: Netanyahu’s 2015 speech before Congress, in which invoked the Biblical book of Esther to drive home the “threat” of present day Iran to the state of Israel. (“Today the Jewish people face another attempt by yet another Persian potentate to destroy us.”)

With the political ascendency of the settler movement, it might be said that the Romantic nationalism Israel’s of socialist founders has found common cause with religious Zionists who use the Bible to make unabashedly fundamentalist claims on the land. Thus, an extreme nationalist Israeli politician like Ayelet Shaked can be accurately described as “a secular woman from left-leaning Tel Aviv (who has) become the most successful spokesperson for the religious-nationalist party and the settlement movement it strongly supports.” In a sense, we might say that the trajectory of contemporary Zionism has hopelessly conflated secular nationalism and religious ideology into one Biblically-based claim to historic Palestine.

In the end, however, whether it is used by Labor Zionists, Revisionist Zionists or right wing West Bank settlers, the use of the Bible as the “Jewish people’s deed of sale” to the land of Israel represents a radical break with Jewish history, throughout which Jews regarded this text as a religious – not a political – document. It is also a profoundly fraught enterprise, particularly when you consider that the Zionist national epic includes God’s command in the book of Joshua for the Israelites to take the land by force and dispossess its Canaanite residents.

In an era that is currently witnessing the rise of romantic/ethnic (read “white”) nationalism throughout the world once more, it is critical that nations honestly assess what it is that truly binds them together. Is it one people’s “organic right” to a particular land or a commitment to the individual rights of all who dwell upon it? 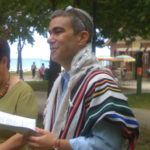 Rabbi Brant Rosen: I’m the Midwest Regional Director for the American Friends Service Committee and the rabbi of Tzedek Chicago. Prior to AFSC and Tzedek, I served as a congregational rabbi at Jewish Reconstructionist Congregation from 1992 to 2014. Over the years, I increasingly used Shalom Rav to chart the changes of my own personal relationship to Israel. Eventually the subject of Israel/Palestine became a primary focus of the blog. From 2008 to 2014 I carried on something of a conversation with my readers on this issue; many of those posts and comments were later published in a book, “Wrestling in the Daylight: A Rabbi’s Path to Palestinian Solidarity.