Frantz Omar Fanon was a Martinique-born French psychiatrist, philosopher, revolutionary, and writer whose works are influential in the fields of post-colonial studies, critical theory, and Marxism. As an intellectual, Fanon was a political radical, and an existentialist humanist concerning the psychopathology of colonization, and the human, social, and cultural consequences of decolonization. 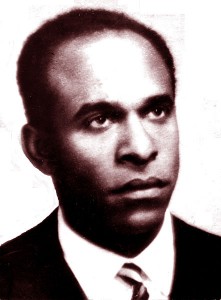 Frantz Fanon’s relatively short life yielded two potent and influential statements of anti-colonial revolutionary thought, Black Skin, White Masks (1952) and The Wretched of the Earth (1961), works which have made Fanon a prominent contributor to postcolonial studies.

Fanon was born in 1925, to a middle-class family in the French colony of Martinique. He left Martinique in 1943, when he volunteered to fight with the Free French in World War II, and he remained in France after the war to study medicine and psychiatry on scholarship in Lyon. Here he began writing political essays and plays, and he married a Frenchwoman, Jose Duble. Before he left France, Fanon had already published his first analysis of the effects of racism and colonization, Black Skin, White Masks (BSWM), originally titled “An Essay for the Disalienation of Blacks,” in part based on his lectures and experiences in Lyon.

BSWM is part manifesto, part analysis; it both presents Fanon’s personal experience as a black intellectual in a whitened world and elaborates the ways in which the colonizer/colonized relationship is normalized as psychology. Because of his schooling and cultural background, the young Fanon conceived of himself as French, and the disorientation he felt after his initial encounter with French racism decisively shaped his psychological theories about culture. Fanon inflects his medical and psychological practice with the understanding that racism generates harmful psychological constructs that both blind the black man to his subjection to a universalized white norm and alienate his consciousness. A racist culture prohibits psychological health in the black man. 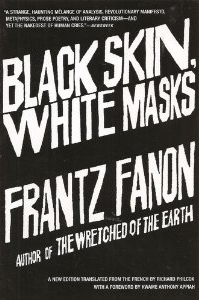 For Fanon, being colonized by a language has larger implications for one’s consciousness: “To speak … means above all to assume a culture, to support the weight of a civilization” (17-18). Speaking French means that one accepts, or is coerced into accepting, the collective consciousness of the French, which identifies blackness with evil and sin. In an attempt to escape the association of blackness with evil, the black man dons a white mask, or thinks of himself as a universal subject equally participating in a society that advocates an equality supposedly abstracted from personal appearance. Cultural values are internalized, or “epidermalized” into consciousness, creating a fundamental disjuncture between the black man’s consciousness and his body. Under these conditions, the black man is necessarily alienated from himself.

Fanon insists, however, that the category “white” depends for its stability on its negation, “black.” Neither exists without the other, and both come into being at the moment of imperial conquest. Thus, Fanon locates the historical point at which certain psychological formations became possible, and he provides an important analysis of how historically-bound cultural systems, such as the Orientalist discourse Edward Said describes, can perpetuate themselves as psychology. While Fanon charts the psychological oppression of black men, his book should not be taken as an accurate portrait of the oppression of black women under similar conditions. The work of feminists in postcolonial studies undercuts Fanon’s simplistic and unsympathetic portrait of the black woman’s complicity in colonization. 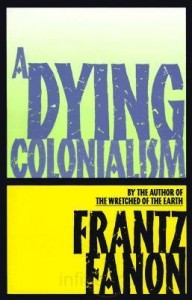 In 1953, Fanon became Head of the Psychiatry Department at the Blida-Joinville Hospital in Algeria, where he instituted reform in patient care and desegregated the wards. During his tenure in Blida, the war for Algerian independence broke out, and Fanon was horrified by the stories of torture his patients — both French torturers and Algerian torture victims — told him. The Algerian War consolidated Fanon’s alienation from the French imperial viewpoint, and in 1956 he formally resigned his post with the French government to work for the Algerian cause. His letter of resignation encapsulates his theory of the psychology of colonial domination, and pronounces the colonial mission incompatible with ethical psychiatric practice: “If psychiatry is the medical technique that aims to enable man no longer to be a stranger to his environment, I owe it to myself to affirm that the Arab, permanently an alien in his own country, lives in a state of absolute depersonalization … The events in Algeria are the logical consequence of an abortive attempt to decerebralize a people” (Toward the African Revolution 53).

Following his resignation, Fanon fled to Tunisia and began working openly with the Algerian independence movement. In addition to seeing patients, Fanon wrote about the movement for a number of publications, including Sartre’s Les Temps Modernes, Presence Africaine, and the FLN newspaper el Moudjahid; some of his work from this period was collected posthumously as Toward the African Revolution (1964). But Fanon’s work for Algerian independence was not confined to writing. During his tenure as Ambassador to Ghana for the Provisional Algerian Government, he worked to establish a southern supply route for the Algerian army.

While in Ghana, Fanon developed leukemia, and though encouraged by friends to rest, he refused. He completed his final and most fiery indictment of the colonial condition, The Wretched of the Earth, in 10 months, and the book was published by Jean-Paul Sartre in the year of his death. Fanon died at the National Institutes of Health in Bethesda, Maryland,where he had sought treatment for his cancer, on December 6, 1961. At his request, his body was returned to Algeria and buried with honors by the Algerian National Army of Liberation.

In The Wretched of the Earth, Fanon develops the Manichean perspective implicit in BSWM. To overcome the binary system in which black is bad and white is good, Fanon argues that an entirely new world must come into being. This utopian desire, to be absolutely free of the past, requires total revolution, “absolute violence” (37). Violence purifies, destroying not only the category of white, but that of black too. According to Fanon, true revolution in Africa can only come from the peasants, or “fellaheen.” Putting peasants at the vanguard of the revolution reveals the influence of the FLN, who based their operations in the countryside, on Fanon’s thinking. Furthermore, this emphasis on the rural underclass highlights Fanon’s disgust with the greed and politicking of the comprador bourgeoisie in new African nations. The brand of nationalism espoused by these classes, and even by the urban proletariat, is insufficient for total revolution because such classes benefit from the economic structures of imperialism. Fanon claims that non-agrarian revolutions end when urban classes consolidate their own power, without remaking the entire system. In his faith in the African peasantry as well as his emphasis on language, Fanon anticipates the work of Ngũgĩ wa Thiong’o, who finds revolutionary artistic power among the peasants.

Given Fanon’s importance to postcolonial studies, the obituaries marking his death were small; the two inches of type offered by The New York Times and Le Monde inadequately describe his achievements and role. He has been influential in both leftist and anti-racist political movements, and all of his works were translated into English in the decade following his death. His work stands as an important influence on current postcolonial theorists, notably Homi Bhabha and Edward Said.

British director Isaac Julien’s Frantz Fanon: Black Skin, White Mask (1996) has recently been released by California Newsreel. Weaving together interviews with family members and friends, documentary footage, readings from Fanon’s work, and dramatizations of crucial moments in his life, the film reveals not just the facts of Fanon’s brief and remarkably eventful life but his long and tortuous journey as well. In the course of the film, critics Stuart Hall and Françoise Verges position Fanon’s work in his own time and draw out its implications for our own. 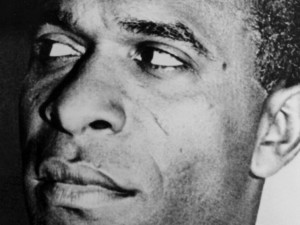