On 16 Jul 1945, members of America’s Manhattan Project held their first successful test of the atom bomb in Alamogordo, New Mexico. [A day to live in infamy] 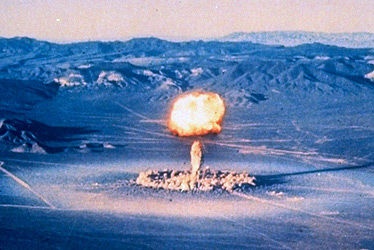 The Manhattan Project’s (named for the city where the research began) roots stretch back to 1939, when it was revealed that German physicists had discovered how to split uranium atoms. Albert Einstein and Enrico Fermi were scientists who’d escaped to America from Germany and Italy respectively.

Einstein sent President Roosevelt a letter urging him to develop an atomic research program. Roosevelt didn’t think the project was necessary, but agreed to proceed slowly. By late 1942, the Manhattan Project, America’s program to design and build an atomic bomb, was established.

The research began at just a few universities. The first major breakthrough came in December 1942 when Fermi and a group of physicists created the first controlled nuclear chain reaction. This development led to vastly increased funds and the creation of several nuclear facilities. The main plant was located in Los Alamos, New Mexico, under the leadership of Robert Oppenheimer. In the summer of 1945, he was ready to test the first bomb.

In the early hours of July 16, 1945, the project’s scientists and a few dignitaries convened on Alamogordo, New Mexico, about 120 miles south of Santa Fe. They positioned themselves about 10,000 yards away from the bombing site. The bomb was dropped at 5:29:45 a.m. The resulting blast was visible for 200 miles. It produced a mushroom cloud 40,000 feet high and blew out windows in civilian homes up to 100 miles away. The blast also created a half-mile-wide crater and transformed the sand below into glass. A cover-up story was released, claiming that a large ammunition dump had exploded in the desert.

The project, which had an initial budget of $6,000 ultimately cost about $2 billion and employed over 120,000 Americans. The success of that test ushered in the atomic age and now American leaders pondered where to use their new bomb. Germany was the original target, but since they had since surrendered, Japan was selected.

President Truman, who was at the Potsdam Conference in Germany, was informed the test was successful. The next month, bombs were transported from the U.S. to the Mariana Islands in the Pacific while specially adapted B-29s flew there. The U.S., Great Britain, and China issued an ultimatum to Japan – surrender unconditionally or be destroyed. Unfortunately the Japanese chose to fight on. On August 6, a B-29 named Enola Gay dropped a uranium bomb called “Little Boy” on Hiroshima, Japan. Between 70,000 and 100,000 people were killed in the blast. Three days later, a bomb using plutonium exploded over Nagasaki, killing 39,000 people instantly. Japan surrendered shortly afterwards on August 14. Historians from both countries agree that the atomic bombs actually saved American and Japanese lives.

With the war concluded, America’s top scientists and leaders knew that nuclear weapons and energy would have a tremendous impact on the future. Connecticut Senator Brien McMahon (1903-1952) served as chairman of the Joint Committee on Atomic Energy. McMahon also authored the McMahon Act for the control of atomic energy, which resulted in the establishment of the Atomic Energy Commission (AEC) in 1946. The AEC directed the development and use of atomic energy for both military and civilian purposes.

In December 1950, President Harry S. Truman established the Nevada Test Site (NTS), a gigantic outdoor laboratory, about 60 miles northwest of Las Vegas. At approximately 1,375 square miles, it’s larger than the State of Rhode Island. The site was the only nuclear weapons testing area in the continental U.S. Before 1950, most nuclear tests had been done at small islands in the Pacific Ocean, which was very costly and time consuming. The first bomb tested at the NTS was a one-kiloton warhead, detonated January 27, 1951. Nuclear tests continued at the NTS for four decades.

On December 8, 1953, President Dwight D. Eisenhower gave a speech before the United Nations General Assembly. President Eisenhower stated that he hoped “to find the way by which the inventiveness of man shall be consecrated to his life.” He proposed a program called Atoms for Peace, in which nations would donate atomic power to the United Nations, in order to find peaceful uses for it. This program developed into the International Atomic Energy Agency, and had far-reaching effects on American policy and attitudes.