Settlers Seize another Home in Jerusalem 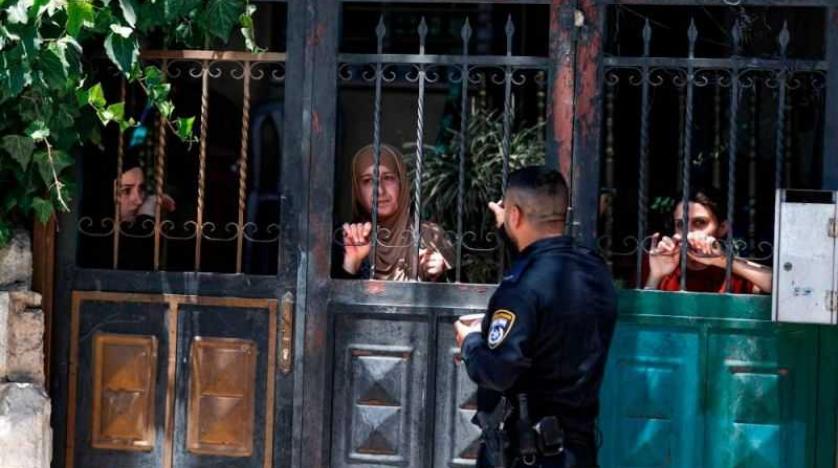 An Israeli policeman in front of a house resided by a Palestinian family, on July 10, 2019, in the Silwan district near the Old City in East Jerusalem. AFP / Ahmad Gharabli

11 Jul 2019 – Israeli soldiers evicted a Palestinian family from their east Jerusalem home and handed it over to settlers yesterday.

The police forcefully removed the family from their home after a court dismissed their appeal and ruled in favor of the settler group ending a 25-year-long battle over the property against Elad settlement association.

Majed Ghaith from Wadi Helwa Information Center – Silwan said that dozens of soldiers and settlers raided the house of Siam family in the morning and evicted its residents, before arresting Jawad Siam, one of the heirs and the Center’s director.

During the raid, Israeli forces blocked all roads leading to the premises.

The heirs say that they own the property but settlers say they bought it.

Nohad Siam, one of the heirs, said that Elad has been striving for years to seize the house in many ways, first through conspiring with brokers to take fingerprints of the late Mariam Abou Zouair for a document stating she would give three of her sons the right to the property while she was dying. However, in 1999 Israeli courts rejected Elad’s claims, stating that the property belongs to her eight children, according to the heirs of Abou Zouair.

In another attempt to file a case against the family in 2001, Elad claimed that it had purchased three plots in the property (the brothers in the United States, headed by Mahmoud Daoud Khalil), and called for other shares to be classified as the Custodian of Absentee Property.

Nohad added that after several hearings, it was revealed that Elad had purchased the shares of four heirs, in addition to two shares under the Custodian of Absentee Property.

Palestinians say Israel and groups such as Elad are on a systematic campaign to force them out of Jerusalem.

But Palestinian Authority officials have admitted difficulty in prosecuting those relinquishing their homes for several reasons, including the process occurring in secrecy, with some taking place in Jerusalem or Israel where the authority has no power. Some of those selling land are also Palestinians living abroad.