Shoot to Maim: The Harvesting of Palestinian Bodies

Reconstructive surgery is defined as surgery which aims to return ‘form and function’ to the injured body. After 30 years of working as a Plastic and Reconstructive surgeon with the injuries inflicted by the Israeli war machine on the bodies of Palestinians, I have been driven to try to understand the politics of injuring within the greater context of the Arab-Israeli conflict. This journey culminated on the eve of the 14th of May 2018 (the move of the American Embassy to Jerusalem) when, over a period of 4 hours, 3,400 Palestinian demonstrators were wounded by Israeli troops, the majority of whom with high velocity sniper rifles. 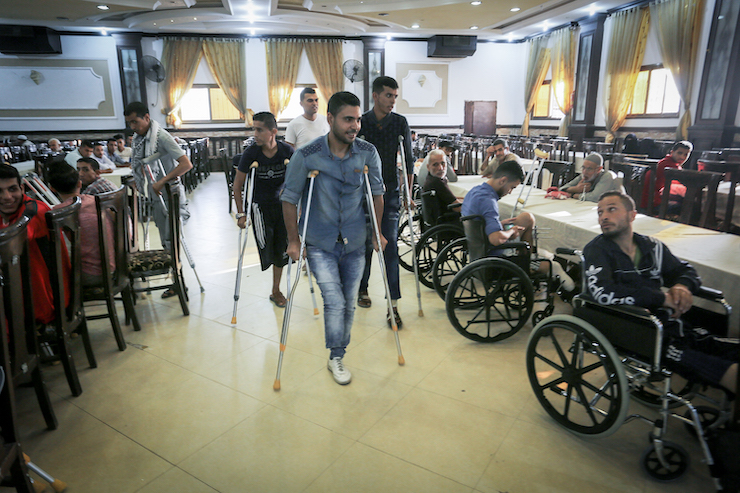 Young Palestinian men who lost their legs after being shot by Israeli snipers in the Great Return March attend an Iftar dinner organized by a charity in Khan Younis, Gaza Strip, June 11, 2018.  (Abed Rahim Khatib/Flash90)

Any attempt at understanding Israel’s use of force to quell the Great Return Marches since 30th of March 2018, including the 14th of May, has to start with the question: ‘what does Israel want with the Palestinian body?’ Why would you intentionally maim, with great accuracy using snipers, 6,500 young economically productive Palestinians?

In his article, ‘Is it Apartheid?’, Moche Mashover pointed to the fact that the fundamental difference between South African and Zionist settler colonialism lies in their relationship to indigenous labor. In South Africa, labor power was viewed as one of the indigenous resources to be exploited in the generation of capital. It developed apartheid as a mechanism for managing this labor yet keeping it as part of the same economy, and therefore the same society. The architects of apartheid did not want a real departure of the black Africans, whose labor power was vital for their economy. Zionism, on the other hand, never needed Palestinian labor to generate capital and therefore wanted to eliminate (through expulsion or extermination) the indigenous Palestinian population. After the expulsion of the majority of Palestinians in 1948, what was left never represented a ‘demographic threat.’ 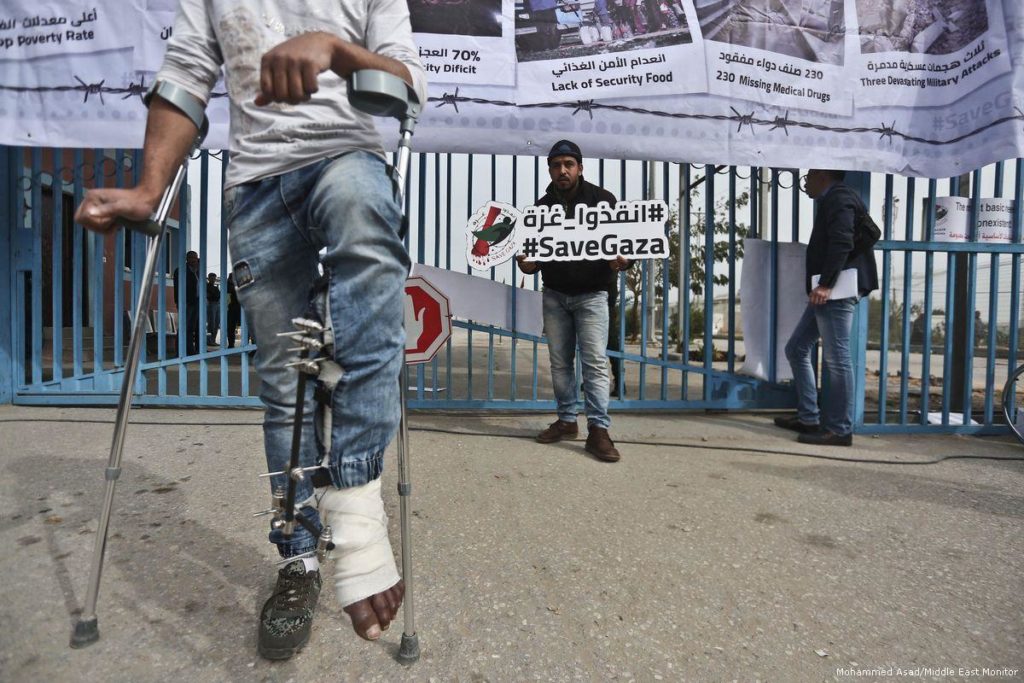 Palestinians, in particular the elderly, sick and disabled, come together to call for international efforts to save Gaza from the humanitarian crisis,
[Mohammed Asad/Middle East Monitor]

Faced with a new population to manage after 1967, the Israeli state had to devise ways of keeping the Palestinians in as a subjugated population as a purely temporary measure until the time was opportune for ethnic cleansing. The Gaza Strip represents the closest the Israelis can get to ethnic cleansing without actually doing it: an open-air prison with maximum people to land ratio (using the Zionist principle of ‘Land without a people for a people without a land’) represents the most efficient use of land to trap the largest number of Palestinians (2 million in 360 sq km). So rather than Bantustans, the Israelis wanted Indian Reservations, of which the Gaza Strip is the most shining example. [1]

Israel has long tried to frame its relationship with Palestinians in terms of responding to a humanitarian crisis. Humanitarian language assumed its central place in Israeli discourse with regards its relationship to Palestinians, particularly in Gaza after 2006, when Hamas seized control of the Gaza Strip and the Israelis tightened the blockade. The repeated invocation of crisis, each of which results from Israel’s cyclical wars on Gaza, also has had the effect of making the last catastrophic situation the new benchmark for normality, which in turn requires urgent aid to return to.[2]

In her book, The Right to Maim, Jasbir Paur noted ‘a complementary logic long present in Israeli tactical calculations of settler colonial rule — that of creating injury and maintaining Palestinian populations as perpetually debilitated, and yet alive, in order to control them. The Israeli Defense Forces have shown a demonstrable pattern over decades of sparing life, of shooting to maim rather than to kill.’ This prima facie humanitarian practice of not killing is in fact a deliberate policy of leaving many civilians ‘permanently disabled’ in an occupied territory of destroyed hospitals, rationed medical supplies, and scarce resources.

What is different in the pattern of injuries during the Great Return Marches is that the accuracy of the weapon of choice does not leave any possibility that mutilation was somehow a byproduct (collateral damage) of the act of war. Maiming therefore becomes a form of value extraction from a population that would otherwise have no economic value. Injuring Palestinians not only generates political capital in the form of population control and an altered political discourse, but also sustains a lucrative humanitarian economy. [3]

Therefore, I contend that in addition to being a weapon of population subjugation and of politically ensuring that the Palestinians in Gaza are seen by the world simply as a humanitarian problem ‘thus to derail their struggle for independence and statehood,’[4] maiming also offers Israeli settler-colonialism a method of generating profit, not through the labor of Palestinian bodies but through the harvesting of these very bodies by creating a cyclical humanitarian crisis in order to reap 78% of all humanitarian aid intended for its victims.[5]

The Responsibility to Protect can only be effectively invoked when we understand the intrinsic role these violations play within the Zionist settler colonialist project in Palestine rather than dealing with them as policy aberrations of a state that can be corrected without infringing its very essence. 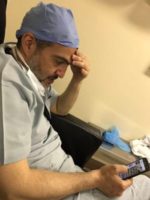 Dr. Ghassan Abu-Sittah, MBchB, FRCS (plast) is a British-Palestinian Professor of Plastic and Reconstructive Surgery. He completed his medical education at University of Glasgow in the U.K. In 2011, he was recruited by the American University of Beirut Medical Center. In 2012, he became Head of the Division of Plastic and Reconstructive Surgery at the AUBMC and in 2015 co-founded and became director of the Conflict Medicine Program at Global Health Institute at the American University of Beirut. He serves as a reviewer at the National Institute of Health Research (NIHR-UK) and is on the Board of Advisors at its Global Research Group on Burn Trauma. He has published extensively on war injuries, including a medical textbook, Reconstructing the War Injured Patient. He has worked as a war surgeon in Iraq, South Lebanon and during the three wars in the Gaza Strip. His work was featured by numerous newspapers and media outlets, notably Le Monde, The Independent, Telegraph, BBC and CNN.