“The key is building fires where you can warm yourself as you wait for the tempest to pass.” 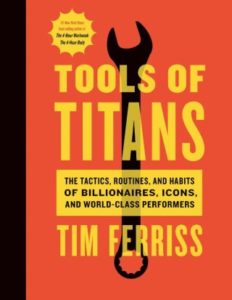 Most people know Tim Ferriss as the amicable, quick-witted, high-energy writer, adventurer, and interviewer, who has devoted his life to optimizing human performance across the full spectrum of physical and mental health. But few know that, in addition to nearly dying at birth and growing up with no material luxury, Ferriss survived a period of suicidal depression that nearly claimed his life — the kind of suffocating grimness which William Styron so unforgettably described.

Ferriss discusses that dark episode for the first time in Tools of Titans: The Tactics, Routines, and Habits of Billionaires, Icons, and World-Class Performers (public library) — his compendium of learnings from more than two hundred interviews with entrepreneurs, artists, writers, scientists, and other titans of achievement, including philosopher Alain de Botton, musician Amanda Palmer, mindfulness and meditation teacher Tara Brach, neuroscientist Sam Harris, writer Malcolm Gladwell, social scientist Brené Brown, and writer and former firefighter Caroline Paul. In a chapter dedicated to the darkest period of his life, he shares the most any of us ever can: his subjective experience and his personal coping strategies, in the hope that they might help others who are also struggling. 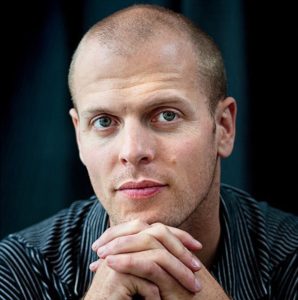 Reflecting on why he kept his suicidal depression a secret for many years, Ferriss distinguishes between two kinds of secrets — those we keep because we fear fleeting mortification, like accounts of embarrassing things we’ve done in sub-optimal moments, and dark secrets that paralyze us with deep shame, “the shadows we keep covered for fear of unraveling our lives.”

Noting that a number of his closest friends in high school and college had killed themselves — and, lest we forget, there is perilous social contagion in suicide — Ferriss outlines the downward spiral which he himself barely escaped. He writes:

In hindsight, it’s incredible how trivial some of it seems. At the time, though, it was the perfect storm. I include wording like “impossible situation,” which was reflective of my thinking at the time, not objective reality.

Ferriss goes on to trace his downward spiral, precipitated by his failing senior thesis at Princeton — a pinnacle of education for which he had labored to transcend his humble beginnings since childhood. As it became clear that he wouldn’t be able to process the hundreds of pages of original Japanese research, in Japanese, in order to complete his ambitious East Asian Studies thesis in time, Ferriss realized that he wouldn’t graduate with his class — something his hostile thesis advisor made abundantly and abrasively clear. Feeling betrayed by the system he had worked so hard for, he spiraled into dejection.

Just then, his longtime girlfriend severed the relationship on account of his “neediness,” which she felt was compromising her varsity season. He rented a lonesome apartment off campus to continue working on his thesis as he watched his friends gleefully graduate. Trapped in isolation that only amplified his despair, he began to feel like a useless burden on the world and ceased to see a reason for being.

One day, wandering aimlessly through the bookstore, he chanced upon a book on suicide.

Ferriss picks up the story:

It’s important to mention that, by this point, I was past deciding. The decision was obvious to me. I’d somehow failed, painted myself into this ridiculous corner, wasted a fortune on a school that didn’t care about me, so what would be the point of doing otherwise? To repeat these types of mistakes forever? To be a hopeless burden to myself and my family and friends? … The world was better off… What would I ever contribute? Nothing. So the decision was made, and I was in full-on planning mode. 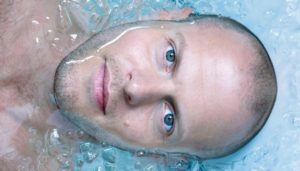 But despite his meticulous planning of the act, something thus far outside his scope of considerations occurred: He received an unexpected phone call from his mother, precipitated by a fortuitous mishap. He had ordered the suicide book from the Princeton library, but had forgotten that the address on file was still his parents’ home, which meant that as soon as the book became available, his parents received a postcard from the library announcing that the suicide book was available for pickup. His mother, alarmed, immediately called him. Ferriss transports us to what it was like to have that seemingly serendipitous conversation and considers its life-saving effect:

I am snapped out of my own delusion by a one-in-a-million accident. It was only then that I realize something: My death wouldn’t just be about me. It would completely destroy the lives of those I cared about most. I imagine my mom, who had no part in creating my thesis mess, suffering until her dying day, blaming herself.

Motivated by this momentary glimpse of the circle of love beyond his locus of personal agony, Ferriss decided to take a few months to restore his physical and mental health — perhaps the seedbed of his lifelong emphasis on the indivisibility of the two. In a sentiment that calls to mind Aldous Huxley’s insistence on mind-body integration — Ferriss is, after all, Huxley’s contemporary counterpart in certain ways — he recounts the vitalizing effect of this embodied approach to his sanity:

Months later, after focusing on my body instead of sitting around trapped in my head, things are much clearer. Everything seems more manageable. The “hopeless” situation seems like shitty luck but nothing permanent.

From this newfound place of perspective, Ferriss was able to find greater stability as he faced life’s fleeting perturbations. In a testament to Henry Miller’s notion that “on how one orients himself to the moment depends the failure or fruitfulness of it,” he returned to Princeton and was able to withstand his advisor’s merciless takedown of the thesis on which he had worked so hard. In an aside that further demonstrates just how mutable even our bitterest resolves are, Ferriss notes that the thesis takedown made him vow to never write another word again; this 700-page tome is his fourth book.

With a sensitive and self-aware eye to the disconnect between how all-consuming such setbacks can seem to the depressed person and how trivial to someone judging from the outside, he writes:

Some of you might also be thinking “That’s it?! A Princeton student was at risk of getting a bad grade? Boo-fuckin’-hoo, man. Give me a break…” But … that’s the entire point. It’s easy to blow things out of proportion, to get lost in the story you tell yourself, and to think that your entire life hinges on one thing you’ll barely remember 5 or 10 years later. That seemingly all-important thing could be a bad grade, getting into college, a relationship, a divorce, getting fired, or a bunch of hecklers on the Internet.

Likening suicide to “wearing a suicide bomber’s vest of explosives and walking into a crowd of innocents,” Ferriss considers the far-reaching ripples of grief and sorrow which the act sets into motion:

Killing yourself can spiritually kill other people. Your death is not perfectly isolated. It can destroy a lot, whether your family (who will blame themselves), other loved ones, or simply the law enforcement officers or coroners who have to haul your death mask-wearing carcass out of an apartment or the woods. The guaranteed outcome of suicide is NOT things improving for you (or going blank), but creating a catastrophe for others…

A friend once told me that killing yourself is like taking your pain, multiplying it by 10, and giving it to the ones who love you. I agree with this, but there’s more to it. Beyond any loved ones, you could include neighbors, innocent bystanders exposed to your death, and people — often kids — who commit “copycat suicides” when they read about your demise. This is the reality, not the cure-all fantasy, of suicide.

Drawing on his own experience, Ferriss offers — only after covering the basic necessity of crisis hotlines and other resources for professional help — an arsenal of tools and tricks that he uses for “keeping the darkness at arm’s length” to this day. One strategy he suggests for those enduring intolerable psychic pain is making a “non-suicide vow” with a friend. He writes:

As silly as it might sound, it’s sometimes easier to focus on keeping your word, and avoiding hurting someone, than preserving your own life. And that’s totally okay. Use what works first, and you can fix the rest later. If you need to disguise a vow out of embarrassment … make it a “mutual non-self-hurt” vow with a friend who beats himself or herself up.

Make it about them as much as you. If you don’t care about yourself, make it about other people.

Another strategy revisits the importance of mind-body integration:

But his most powerful technique has to do not with the self but with other selves — or, rather, with mooring the self to the existence of goodness by modeling and extending it to others:

If you can’t seem to make yourself happy, do little things to make other people happy. This is a very effective magic trick. Focus on others instead of yourself. Buy coffee for the person behind you in line (I do this a lot), compliment a stranger, volunteer at a soup kitchen, help a classroom on DonorsChoose.org, buy a round of drinks for the line cooks and servers at your favorite restaurant, etc. The little things have a big emotional payback, and guess what? Chances are, at least one person you make smile is on the front lines with you, quietly battling something nearly identical.

In a passage that calls to mind Rilke’s abiding wisdom on how winter bolsters the tenacity of the human spirit, Ferriss concludes:

My “perfect storm” was nothing permanent. But, of course, it’s far from the last storm I’ll face. There will be many more. The key is building fires where you can warm yourself as you wait for the tempest to pass. These fires — the routines, habits, relationships, and coping mechanisms you build — help you to look at the rain and see fertilizer instead of a flood. If you want the lushest green of life (and you do), the gray is part of the natural cycle. 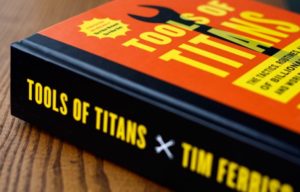 Ferriss discusses his own story, including his struggle with depression and his life-tested strategies for overcoming fear, with unprecedented candor in this revelatory Design Matters interview by Debbie Millman: