The demolitions are part of a grand and continuous plan to rid Jerusalem of its indigenous Palestinian inhabitants. 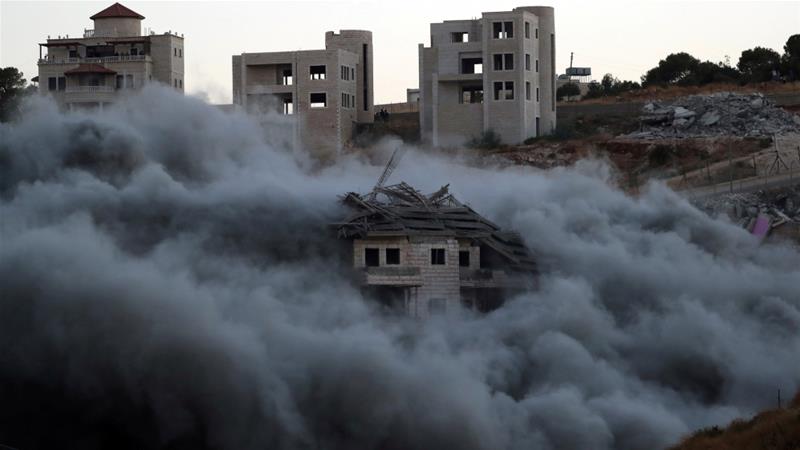 The demolition of a Palestinian building by Israeli forces in the village of Sur Baher on July 22, 2019.  [Ammar Awad/Reuters]

23 Jul 2019 – In the early hours of Monday morning [22 Jul], Israeli armed forces began their biggest demolition push since 1967 in Wadi Hummus, in the Palestinian Sur Baher neighbourhood southeast of Jerusalem. Palestinians and international activists attempted to resist the demolitions, for which they were greeted with brute force, with dozens reporting injuries from tear-gassing and beatings from Israeli forces.

Since the demolitions began, videos have emerged on social media showing Israeli soldiers and police revelling in the demolitions. One particular video shows a masked soldier counting down from 10 before pressing a demolition button and blowing up a Palestinian building in the background.

An Israeli border policeman standing next to him pats him on the back, smiling and laughing, before the two turn around and pose for a picture in front of the smoke and rubble. The masked soldier turns to the border policeman and says “kol hakavod”, literally meaning all the respect in Hebrew but in this case translating to “good job”. In the background, you can hear the jeers and adulation from other soldiers.

#Watch| Israeli soldiers cheer and celebrate the demolition of over 100 residential houses and displacement of over 1000 Palestinians in Wadi Hummus in occupied #Jerusalem. #Palestine pic.twitter.com/5lYKiLzH2J

A United Nations’ statement highlighted the fact that some of the residents losing their homes are refugees facing displacement yet again – a common Palestinian story. Meanwhile, a European Union statement said that it “expect[s] the Israeli authorities to immediately halt the ongoing demolitions”.

The residents of Wadi Hummus had submitted an appeal prior to the demolition to the Israeli Supreme Court which was, rather expectantly, rejected. Israel wants to demolish a total of 13 apartment buildings, displacing thousands of Palestinian residents.

The claim is that the buildings present a security risk to Israel’s so-called “security barrier”, also known as the apartheid wall, 85 percent of which runs through the Palestinian occupied territories cutting and dividing Palestinian land and communities. The pretext of this demolition places other Palestinian villages and towns – such as Al-Ram, Tulkarem and Qalqilliya that are in the vicinity of the apartheid wall – at risk.

This demolition, however, also sets a precedent for the destruction of property under supposed Palestinian Authority (PA) control. Sur Baher is unusual as its lands were divided across Areas A, B and C after the Oslo Accords in the early 1990s, yet the wall, built a decade later in the early 2000s, was erected around the village so that it fell on the Jerusalem side. While Areas A and B are supposed to be under PA control, because the wall was built around the village, it has no presence in the area and offers no services to the residences there.

Yet many residents are still obliged to apply for building permits from the PA if their property falls within Area A or B, meaning that they fall under PA jurisdiction. Indeed, the PA President, Mahmoud Abbas, has confirmed that they would be compensating all families who lost homes in this demolition spree. The cruel irony is that the Israeli authorities will be billing the residents for the demolition costs, making this an entirely profitable endeavour for Israel.

Moreover, the destruction of property in Areas A and B sends a very clear and simple message from Israel to the international community and the PA: Oslo is dead. Indeed, far from being a security concern, the demolitions in Sur Baher are actually part of a grand and continuous plan to rid Jerusalem of its indigenous Palestinian inhabitants in favour of Jewish Israelis. Dubbed by many as geodemographic engineering, this is obviously ethnic cleansing.

This is not the first time such heinous images and videos of Israeli authorities or soldiers have appeared. In 2014, during the “Protective Edge” military assault on Gaza wherein more than 2,000 Palestinians were killed, groups of Israelis would gather on a nearby hill and watch the bombardments. Carrying snacks and drinks, they would cheer and take selfies against a backdrop of smoke. Videos have also been taken of Israeli soldiers, often by their fellow soldiers, cheering as they shoot young Palestinian men.

What this demonstrates is that Israel is a place where the ethnic cleansing of Palestinians is not only state policy, it’s a celebrated policy. Meanwhile, the reaffirmation of commitments to the two-state solution and the Oslo framework by the international community, which is continuously nullified by Israel, only serve to prop up an illusion. This is an illusion that Israel is still willing to grant Palestinians rights and partial sovereignty.

The reality is, however, Israel’s only intention is to continue its project of ethnic cleansing and to render the Palestinian struggle for freedom to nought. This recognition of reality is what the Palestinians so desperately need from the international community in this time of historic vulnerability.