As India and Pakistan – And America and Iran – Go Toe-To-Toe, Now Is the Time to Recall the Scorched Corpses of Hiroshima and Nagasaki 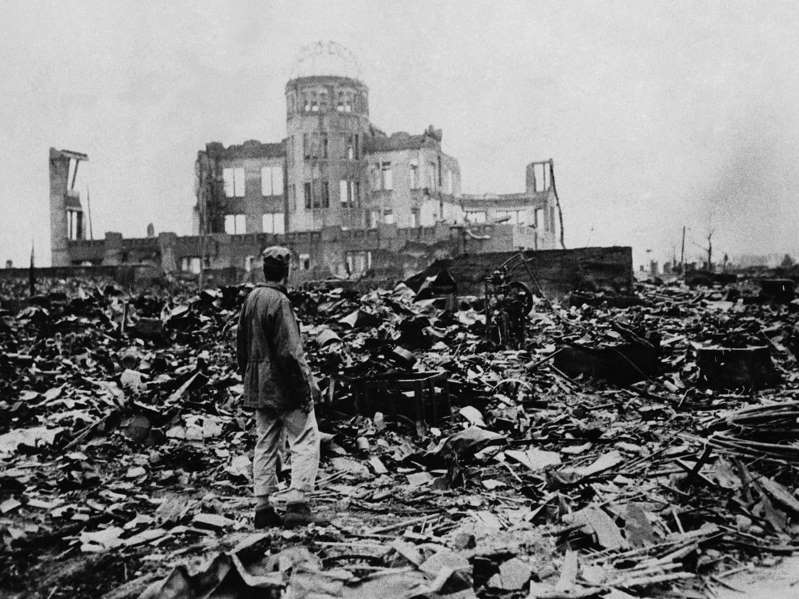 8 Aug 2019 – We like our anniversaries in blocks of fifty or one hundred – at a push we’ll tolerate a twenty five. The 100th anniversary of the Somme (2016), the 75th anniversary of the Battle of Britain (2015). Next year, we’ll remember the end of the Second World War, the first – and so far the only – nuclear war in history.

This week marks only the 74th anniversary of the US atomic bombing of Hiroshima and Nagasaki. It doesn’t fit in to our journalistic scorecards and “timelines”. Over the past few days, I’ve had to look hard to find a headline about the two Japanese cities.

But, especially in the Middle East and what we like to call south-east Asia, we should be remembering these gruesome anniversaries every month. Hiroshima was atomic-bombed 74 years ago on Tuesday, Nagasaki 74 years ago on Friday. Given the extent of the casualty figures, you’d think they’d be unforgettable. But we don’t quite know (nor ever will) what they were.

The bombing of the two cities, we are told, left between 129,000 and 226,000 dead. The first US statistics suggested only 66,000 dead in Hiroshima, 39,000 in Nagasaki. But in later years, the Hiroshima authorities estimated their dead alone at 202,118 – taking account of those who later died of radiation sickness, rather than just the incinerated corpses and human shadows left in the immediate aftermath of the explosion.

In the Middle East, where Aleppo and Mosul and Raqqa count the dead from conventional bombs – American, Russian, Syrian – in the tens of thousands, you might think the 1945 statistics would leave the folk who live there pretty cold. But the book of crises unfolding in the region – by the chapter, almost every month – is of critical importance to every soul who lives between the Mediterranean and India.

For India itself is a nuclear power. So is Pakistan. And so, of course, is Israel. None of them have signed the Non-Proliferation of Nuclear Weapons Treaty (NPT). All are threatening war, over Kashmir, or over Iran, the only nation under threat which has not (yet) got nuclear weapons.

Ayatollah Khomeini originally seized on America’s refusal to express its remorse at the Hiroshima and Nagasaki bombings – “they’ve killed hundreds of thousands of people … many years have passed and they can’t even bring themselves to apologise,” he said, and the current Iranian leadership have continued Khomeini’s theme. The “only nuclear criminal in the world,” according to the “Supreme Leader’s” successor, Ali Khamanei, “is falsely claiming to fight the proliferation of nuclear weapons.”

Iran, it should be added, did sign the NPT, but was later found in non-compliance of the safeguard agreement. And Iran, of course, is the non-nuclear power now being constantly threatened with war by two nuclear powers – America and Israel – the first of which, under Donald Trump, tore up his country’s commitment to the only international agreement that ever existed to limit Iran’s nuclear programme.

As the US applies new sanctions to Iran – miserably supported by the ever-compliant banks and big businesses of Europe – Iran marginally breaks its side of the nuclear control agreement. And thus becomes the recipient of even more ferocious threats from Washington and Israel.

The word “nuclear” is not just a harmless adjective. Look at the old photographs of the blisters on the dying Japanese of Hiroshima and Nagasaki. Iran itself suffered the horrors of gas warfare when Iraq – supported at the time by the US – used chemicals on Iranian soldiers and civilians. I saw their gas-gangrene wounds with my own eyes in the late 1980s and they reminded me of the Hiroshima snapshots. The Iranians really do know the effects of “weapons of mass destruction”.

Yet they, we are supposed to believe, are the nuclear “threat” in the Middle East. The Islamic Republic is no saints’ paradise. Its corruption (within the government), its cruelty towards its own dissenters, its hangman’s noose justice against its own people and its prim disgust at even the most innocent demand for freedom, scarcely qualify the immensely wealthy Revolutionary Guards Corps – “heroes” of a new “tanker war” and masters of Houthi drone technology – to give lectures on morality. And if we thought that the Iranians held in reserve – let us say – 200 nuclear warheads, we should be trembling in our boots. But they don’t. It’s Israel that conceals – but will not say so – perhaps 200 nuclear warheads.

Not only do we not complain about this. We regard any suggestion of their existence as akin to interference in the internal affairs of a sovereign state. Israel has never confirmed that their nuclear weapons exist: therefore we must not say that they do. Enquire about their exact number and you are treated by Israel’s supporters with deep suspicion. It’s a private matter, we are led to understand. Anyway the Israelis can be trusted with such vile weapons. Can’t they?

Which brings us to Saudi Arabia. Every nation in the Middle East which seeks nuclear power – and the list includes Egypt, by the way – insists, like Iran, that the technology is needed to build power plants.

Read more: It is Trump that needs to be deterred from war, not Iran

Yet when Reuters – whose investigations of human rights and secret criminal activities in the region are first class in both courage and detail – reports on the accurate leaks that US energy secretary Rick Perry approved six secret authorisations to give nuclear assistance to Saudi Arabia, few outside Congress issued a murmur of concern. Not even Israel – which always rages when America’s arms manufacturers hoover up billions of dollars from Arab arms buyers, especially from Saudi Arabia.

South Koreans – those endangered people always under nuclear threat from the Rocket-man-turned-good-guy further north – are also bidding for the Saudi nuclear deal. So are the Russians. So how come, now that the Saudi regime has talked of “cutting off the head of the snake” in Iran, we don’t regard Riyadh as a potential nuclear threat?

How soon will it be before we wonder if the Saudis aren’t going a bit too far down the nuclear path and we suggest a nuclear control agreement along the lines of Obama’s Iran deal? After all, Crown Prince Mohammad bin Salman – and let’s not bring up the little matter of the Saudi evisceration and chopping up of poor Jamal Khashoggi at this point – told CBS last year that his Kingdom would develop nuclear weapons if Iran did.

And as we digest all this – although we really are not talking about it at all, are we? – India decides to tear up its own legal arrangements in Jammu and Kashmir. As the only Muslim-majority state in India, it is now to be split into two union territories, diminishing Muslim power and allowing non-Muslim Indians from other regions to move into this dangerous remnant of the old Raj. The Hindu-led government used a presidential order to revoke the special constitutional status of Jammu and Kashmir. Pakistan, which holds the other bit of Kashmir – both claim the whole area as their own – is understandably infuriated by this change in the status quo.

And both India and Pakistan are nuclear powers. Indeed, there was nothing more pathetic, after Pakistan’s first nuclear tests in 1998, than to travel around this other “Islamic Republic” and, amid the abject poverty of its villages, gaze at the awful commemorative papier-mâché re-creations of the granite mountains in which the explosions took place. There is, I suppose, no point in adding that there are more armed extremist Islamists on Islamabad’s payroll in both Pakistan and Afghanistan – coddled by the Inter-Services Intelligence agency – than there are in the whole of Iran.

So this is a very good week, as we typically ignore the commemoration of Hiroshima and Nagasaki, for us to remember the nuclear threat in the Middle East. At least one nation in every potential conflict in the region – from the Indus to the Mediterranean – is a nuclear power or a prospective nuclear power. India against Pakistan and vice-versa, the US with Iran, the Israelis with Iran – or just about any other Levantine power – and the Saudis versus Iran, and Iran against almost anyone else except Syria.

Oh yes, and Donald Trump has just pulled out of the Cold War Intermediate-Range Nuclear Forces Treaty with Russia – blaming Russia for violating the ban on missiles ranging up to 3,400 miles. All Russia’s fault, says Mike Pompeo. The treaty is now “dead”, the Russian foreign ministry confirms. So it’s time, perhaps, to re-watch those old documentaries of the the B-29 Superfortress Enola Gay and the bomb codenamed “Little Boy” and the brilliant mushroom cloud and all those scorched corpses at Hiroshima.