Borders and Belonging: Toni Morrison’s Prescient Wisdom on the Refugee Struggle, the Violence of Otherness, and the Meaning of Home

“It may be that the most defining characteristic of our times is that, again, walls and weapons feature as prominently now as they once did in medieval times.” 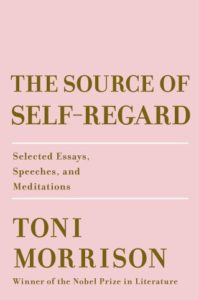 What does home mean and where do we anchor our belonging in a world of violent alienation and alienating violence? I use “alien” here both in the proper etymological sense rooted in the Latin alienus, “belonging to another,” and in the astrophysical sense of “from another planet,” “not human,” for the combined effect of a dehumanizing assault on belonging for those treated and mistreated as alien to a country or a community.

That, and some hint of the remedy for it, is what Toni Morrison (February 18, 1931–August 5, 2019) — one of the titanic thinkers and writers of our time, and the first black woman to receive the Nobel Prize in Literature — returns to again and again throughout The Source of Self-Regard: Selected Essays, Speeches, and Meditations (public library), the final nonfiction collection that gave us Morrison on the singular humanistic power of storytelling and the search for wisdom in the age of information. 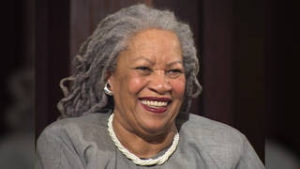 In a timely piece titled “The Foreigner’s Home,” originally delivered as a lecture at the University of Toronto in 2002, Morrison reflects on the notion of foreignness and the traversing of borders in light of our own disquieting feelings of otherness, whatever our national origin and citizenship, and the tremors of our crumbling belonging in an increasingly chaotic world:

Excluding the height of the slave trade in the nineteenth century, the mass movement of peoples in the latter half of the twentieth century and the beginning of the twenty-first is greater now than it has ever been. It is a movement of workers, intellectuals, refugees, armies crossing oceans, continents, immigrants through custom offices and hidden routes, speaking multiple languages of trade, of political intervention, of persecution, exile, violence, and poverty.

The spectacle of mass movement draws attention inevitably to the borders, the porous places, the vulnerable points where one’s concept of home is seen as being menaced by foreigners. Much of the alarm hovering at the borders, the gates, is stoked, it seems to me, by (1) both the threat and the promise of globalism and (2) an uneasy relationship with our own foreignness, our own rapidly disintegrating sense of belonging. 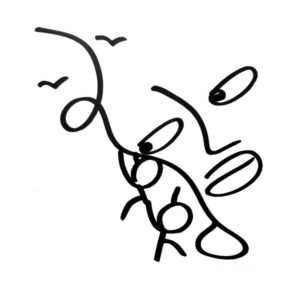 Cover art by Shantell Martin for Borderless Lullabies — a charitable compilation of musicians and writers raising their voices in defense of refugee children.

With an eye to the central questions of belonging — how we decide where and whether we belong, what convinces us that we do, what constitutes foreignness and why it is so perturbing — she writes:

[There is an] inside/outside blur that can enshrine frontiers, and borders real, metaphorical, and psychological, as we wrestle with definitions of nationalism, citizenship, race, ideology, and the so-called clash of cultures in our search to belong.

African and African American writers are not alone in coming to terms with these problems, but they do have a long and singular history of confronting them. Of not being at home in one’s homeland; of being exiled in the place one belongs.

Morrison takes up the crux of this search for belonging — the meaning of home — in another piece, titled “Home” and originally delivered as a convocation address at Oberlin College in 2009:

What do we mean when we say “home”?

It is a virtual question because the destiny of the twenty-first century will be shaped by the possibility or the collapse of a shareable world. The question of cultural apartheid and/or cultural integration is at the heart of all governments and informs our perception of the ways in which governance and culture compel the exoduses of peoples (voluntarily or driven) and raises complex questions of dispossession, recovery, and the reinforcement of siege mentalities. How do individuals resist or become complicit in the process of alienizing others’ demonization — a process that can infect the foreigner’s geographical sanctuary with the country’s xenophobia? By welcoming immigrants, or importing slaves into their midst for economic reasons and relegating their children to a modern version of the “undead.” Or by reducing an entire native population, some with a history hundreds, even thousands of years long, into despised foreigners in their own country. Or by the privileged indifference of a government watching an almost biblical flood destroy a city because its citizens were surplus black or poor people without transportation, water, food, help and left to their own devices to swim, slog, or die in fetid water, attics, hospitals, jails, boulevards, and holding pens. Such are the consequences of persistent demonization; such is the harvest of shame. 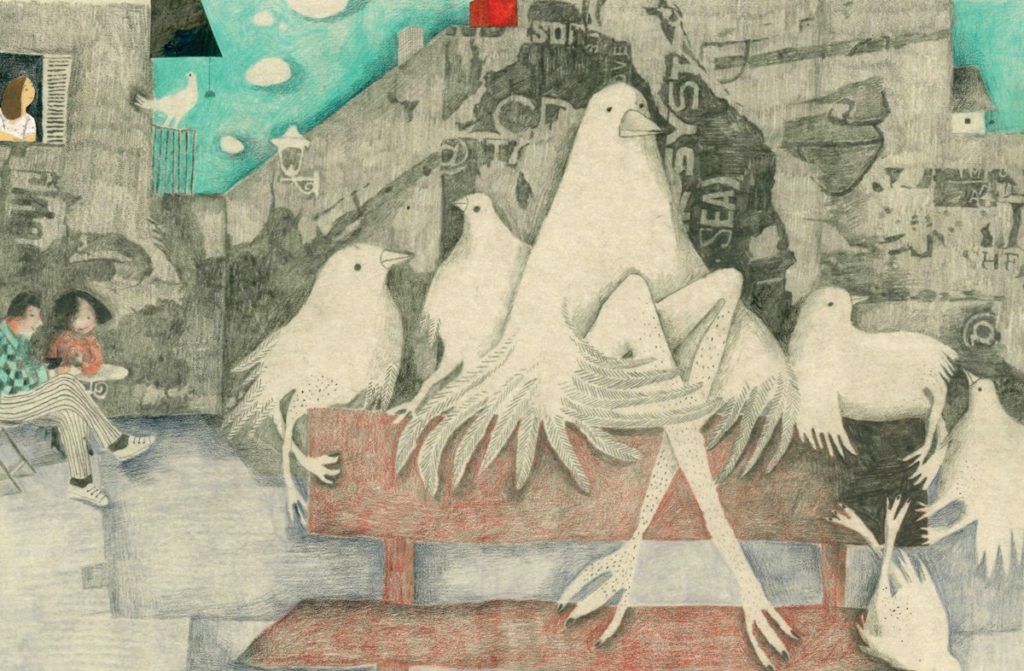 Art by Nahid Kazemi from Over the Rooftops, Under the Moon by JonArno Lawson — a lyrical illustrated meditation on otherness and the consolation of finding one’s belonging.

Noting that the violent handling of populations at and across borders is not new, Morrison considers what history so clearly teaches us about the consequence, if only we have the conscience and courage not to turn a blind eye to it:

Forced or eager exodus into strange territory (psychological or geographical) is indelible in the history of every quadrant of the known world, from the trek of Africans into China and Australia; to military interventions by Romans, Ottomans, Europeans; to merchant forays fulfilling the desires of a plethora of regimes, monarchies, and republics. From Venice to Virginia, from Liverpool to Hong Kong. All these and more have transferred the riches and art they found into other realms. And all these left that foreign soil stained with their blood and/or transplanted into the veins of the conquered. While in their wake the languages of conquered and conqueror swell with condemnation of the other.

Two decades after Audre Lorde’s surprised encounter with the German women of the Diaspora prompted her to ask the crucial question of otherness and belonging — “How can we use each other’s differences in our common battles for a livable future?” — Morrison considers how the global fragmentation of identity has affected our private experience of belonging:

This slide of people has freighted the concept of citizenship and altered our perceptions of space — public and private. The strain has been marked by a plethora of hyphenated designations of national identity. In press descriptions, place of origin has become more telling than citizenship, and persons are identified as “a German citizen of such and such origin” or “a British citizen of such and such origin.” All this while a new cosmopolitanism, a kind of multilayered cultural citizenship, is simultaneously being hailed. The relocation of peoples has ignited and disrupted the idea of home and expanded the focus of identity beyond definitions of citizenship to clarifications of foreignness. Who is the foreigner? is a question that leads us to the perception of an implicit and heightened threat within “difference.” We see it in the defense of the local against the outsider; personal discomfort with one’s own sense of belonging (Am I the foreigner in my own home?); of unwanted intimacy instead of safe distance. 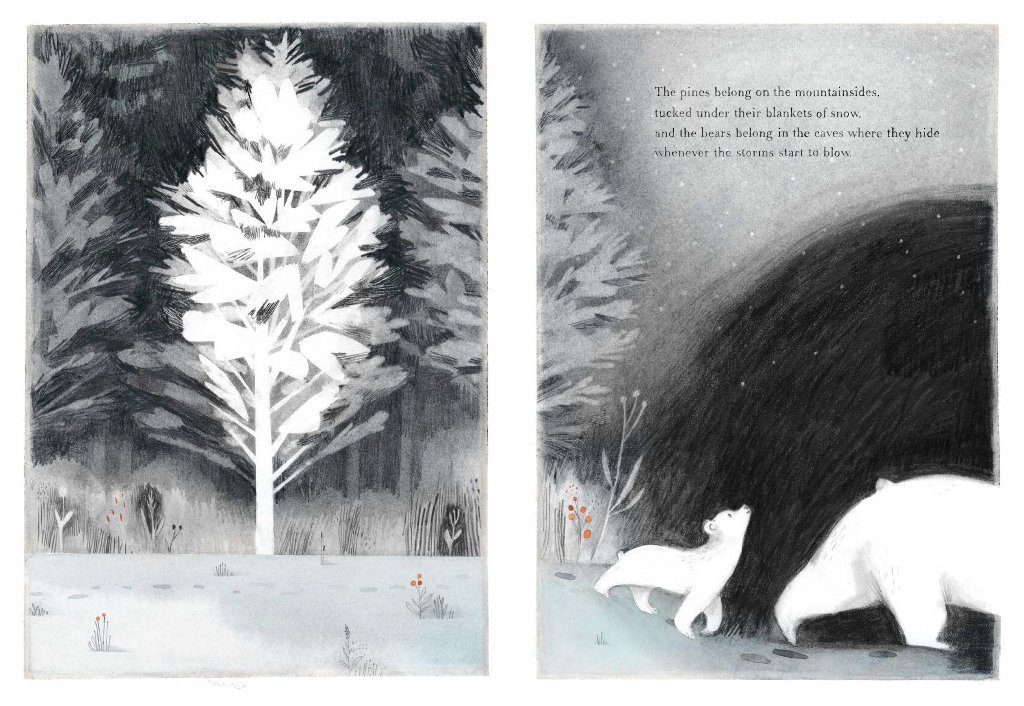 Art by Isabelle Arsenault from You Belong Here by M.H. Clark — an illustrated antidote to our existential homelessness.

In a sentiment of chilling of prescience, offered a decade before her own homeland barbed its borders with unprecedented violence, racism, and inhumanity, Morrison adds a sobering admonition:

It may be that the most defining characteristic of our times is that, again, walls and weapons feature as prominently now as they once did in medieval times. Porous borders are understood in some quarters to be areas of threat and certain chaos, and whether real or imagined, enforced separation is posited as the solution. Walls, ammunition — they do work. For a while. But they are major failures over time, as the occupants of casual, unmarked, and mass grave sites haunt the entire history of civilization.

Complement this particular fragment of The Source of Self-Regard with Amin Maalouf on conflict, belonging, and how we inhabit our identity, David Whyte on how to be at home in yourself, and Hannah Arendt on the refugee plight for identity, then revisit Morrison on the deepest meaning of freedom and her spectacular Nobel Prize acceptance speech about the power of language.