Citizens of Nowhere: One Million Rohingya Still without Rights, Status or Justice

20 Aug 2019 – This month marks the second anniversary of Rohingya refugees fleeing into Bangladesh following a brutal crackdown by Myanmar’s security forces. A predominantly Muslim ethnic minority from the Rakhine state of Buddhist Myanmar, the Rohingya have been called the “most persecuted minority in the world”.

Promised their own autonomous state in return for helping Britain during the World War II (which never happened), the Rohingya have a history of being resented by the Burmese/Myanmarese people. More recently, stripped of citizenship under a 1982 law which deemed the Rohingya as Bengali, they now find themselves stateless, as Myanmar and Bangladesh refuse to acknowledge them as citizens.

In a recent visit to Cox’s Bazar, the coastal district in Bangladesh which houses Rohingya refugee camps, senior Myanmar officials tried to persuade them to return home. A repatriation deal was signed between Bangladesh and Myanmar in 2017 and 2018, but as I wrote last year, without a concrete commitment regarding their safety and the granting of citizenship, the Rohingya will continue to refuse the repatriation plea. To date, almost none have volunteered to return.

Read more: Rohingya crisis: this is what genocide looks like

Now hosting more than 1.1m Rohingyas, Bangladesh has pledged not to force anyone to leave the country. The refugees are officially registered as “forcibly displaced Myanmar nationals”, a designation that denies their refugee status and any associated rights.

This official stance makes them more vulnerable to denial of their human rights – freedom from detention and exploitation, access to public services, education, livelihoods and freedom of movement. Though Bangladesh is not a signatory to the 1951 Refugee Convention or its 1967 Protocol, it has an obligation under international human rights law to ensure that all people, including refugees, retain fundamental rights.

In a recent leaked report, the Association of Southeast Asian Nations (ASEAN) – of which Myanmar is a member – has been optimistic about the return of the Rohingyas, predicting an overall “smooth and orderly” repatriation.

While Malaysia and Indonesia, ASEAN’s two largest Muslim-majority member states, called for a proactive approach to address the crisis, other members offered only weak criticism of Myanmar’s handling of the situation and refrained from direct accusations of mass atrocities committed against the Rohingya population. Unsurprisingly, ASEAN was heavily criticised by human rights groups for the report, which did not even acknowledge the identity of Rohingyas, choosing to refer to them instead as “Bengalis”.

Another vital player in the Rohingya crisis has been the UN. In 2018 the United Nations High Commissioner for Refugees (UNHCR) signed a secret agreement that pushed for repatriation and the establishment of an identity card scheme, which many Rohingya opposed. An independent report analysing the involvement of the UN in Myanmar between 2010-2018, highlights its systemic failures, stating that:

Serious errors were committed, and opportunities were lost in the UN system, following a fragmented strategy rather than a common plan of action.

The report frames the political component as a downside to UN actions on the ground. Further criticism has come from human rights experts who have blasted the UN for downplaying the severity of the crisis until it was too late.

The conditions for the Rohingya inside the world’s largest refugee camp in Cox’s Bazar are far from acceptable. Refugees lack proper sanitation and live in emergency conditions, but still they choose to remain rather to return under a repatriation deal without guarantees of justice for past (or potential) crimes against them.

Human Rights Watch says that the Myanmar national government and the Rakhine state government have consistently avoided responsibility for creating a safe space with basic human rights for returning refugees. Myanmar also refuses to provide access to international investigators to monitor the situation, and in terms of coverage of the Rohingya plight, press freedoms are very limited. 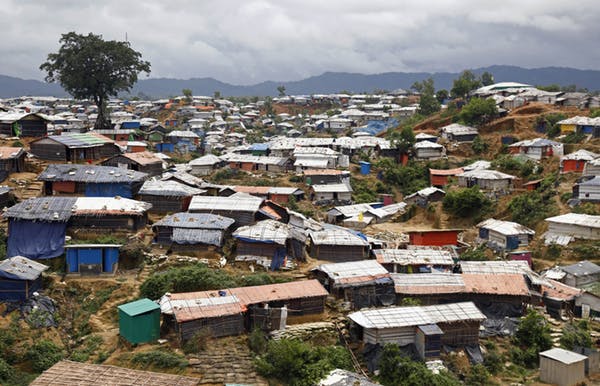 Cox’s Bazar in Bangladesh where the bulk of the Rohingya refugees are settled.
Monirul Alam/EPA

The Myanmar government is responsible for multiple crimes against the Rohingya, including genocide, rape and arson. Given that none of the key perpetrators have been held accountable, the Rohingya’s distrust of their plan is understandable.

The prosecution of key perpetrators is needed urgently, both for those who have lost loved ones as well as those who suffered violence and had to flee their country in fear of their lives. In the past, such trials have been paramount in attaining a sense of justice for victims while consolidating post-conflict peace.

Criminal accountability for the crimes committed is also crucial in order to establish and reinforce the rule of law in any post-conflict society. But peace should not be achieved through the expunging of past crimes – this simply perpetuates trauma and the sense of injustice felt by the victims.

When past mass-crimes remain unaddressed, the chances of recurrence remain high. Justice should not be perceived as an impediment to achieving peace; peace and justice should be seen as reinforcing one another – something the Myanmar government, the UN and ASEAN must recognise if they wish any repatriation deal to be accepted.

The danger of pushing for this fragile peace, which would at best only be a temporary measure, is that the motives of the conflict will not be resolved – namely the Myanmar people’s nationalistic support for their government’s refusal to acknowledge the Rohingya people.

The Rohingya will not accept any deal that does not acknowledge the crimes against them or which allows the perpetrators to escape justice. And they need to know that any future aggression against them will have lawful repercussions – a fundamental right that ASEAN and the UN must consider.