The Schoolteacher and the Genocide

He dreamed of educating the children in his village. But soon he learned that it was dangerous for the Rohingya to dream. 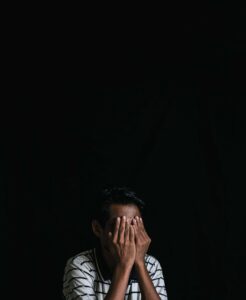 Futhu in the Kutupalong Rohingya refugee camps near Cox’s Bazar, Bangladesh. He covered his face for fear of being targeted by the authorities in Myanmar.
Adam Dean for The New York Times

8 Aug 2019 – When he was in primary school, Futhu read a story about a girl who named her flowers. She wrote their names in a diary, logged when she planted and watered them and charted how they grew. The story was in a book Futhu’s uncle brought to their village in Myanmar’s western Rakhine State from across the border in Bangladesh — the words in English and in Bengali. Futhu was the first in his extended family to attend school — the first of 22 uncles, countless aunts and cousins — and though he excelled at Burmese and English class, he could not really understand the book on his own. His father was himself illiterate, as were most people in their community. So Futhu asked a village trader who often visited their home to read him the stories in the book, one by one.

Futhu followed along, practicing his English. Over time, the pages of the book tattered, until Futhu was able to read it himself. He thought the girl had a good idea and started keeping a diary of his own daily chores. He could not write in Rohingya, the language of his community, because it has had no written form, so he wrote in a mixture of English and Burmese.

The book told another story, too: The girl who kept the flower diary lived through a period in history known as World War II, when, as Futhu understood it, there was a fight between Hitler and the Jews. The girl’s entries about flowers became a diary of what was happening at that time. When Futhu looked around his village, he thought there were many similarities between this story and what he saw in his own Muslim community. He decided he should write the incidents of Rohingya oppression, because maybe someday, in the future, people might want to know about what happened.

Ever since Futhu was small, he knew that the government did not consider Rohingya to be of this place but instead thought of them as illegal immigrants from Bangladesh. As far as Futhu knew, none of his family had migrated from Bangladesh. They’d only been driven there as refugees after one of the many armed operations against the Rohingya — of which there have been roughly a dozen since 1948, though Futhu did not know the exact number. Futhu had learned that there were 135 recognized ethnic groups in Myanmar, called taing-yin-tha, which is often translated as “national race” but literally means something like “offspring of the land,” or indigenous. Those 135 groups, including the neighboring Rakhine and the country’s main ethnic group, the Bamar, had the rights and citizenship that went along with official recognition, but the more than one million Rohingya did not.

Futhu began to write down some of the things he saw around him. The Rohingya, he noted, had to register all their livestock with the government. They required government permission to repair their homes. They needed permission from the government to marry, often paying hefty bribes and waiting for as long as two years to do so. They were unable to enroll in certain majors in college — they could not study to be lawyers or doctors. They could not join the army or the police, or serve as heads of governing bodies or run for public office. They were not allowed to have more than two children. Women were forced to take birth control or seek illegal abortions. Families paid bribes to register additional children or hid them from the authorities. Over time, almost every Rohingya had their nationality cards taken from them. They had to give the authorities their chickens and cows, to lend them their motorcycle or their bodies for forced labor when it was demanded, and received no compensation. Many doctors refused to treat them. Getting to a hospital would require so many travel permissions and so much time that Rohingya often arrived half dead and eventually did die. Families cast the blame on the hospitals themselves — they were sure the doctors intended to kill them. Many stopped going. More died of preventable causes.

When Futhu set about writing down the story of his village back in the late 1990s, he did not have grand ambitions. He wanted to know about his community, about his family and his neighbors, to understand their own roots in this tiny sliver of earth. Dunse Para, as they called it — Koe Tan Kauk in Burmese — was nestled on a narrow stretch of flat, verdant land with the gray Bay of Bengal on one side and the rocky Mayu Mountains looming on the other. Each morning, the men of the village would wake in the darkness, walk to the shoreline and climb into boats, setting off for their daily catch. The boats — small wooden rowboats and 22 larger vessels with motors — belonged to a few wealthy villagers who employed shift workers to go far out to sea. When men weren’t fishing, they were farming their rice paddies or growing chiles. They tended to their animals — chickens, water buffaloes, cows and goats. The community was deeply conservative. Women stayed at home, far from the lingering eyes and hands of the Burmese security services, who often harassed them.

Futhu peppered his grandfather and village elders with questions about Dunse Para’s founding. His grandfather explained that their forefathers lived on a nearby hill where the community now grazed buffaloes. Futhu’s great-great-grandfather donated part of the family’s land there to make a cemetery, but after its construction, people started getting sick, and so they fled down the hill, to a village they called the Village by the Mountain. When it got too crowded there, people migrated, slowly moving closer to the surf. They set up the Big Village, then the Village by the Sea and then the Big Village Transferred by the Sea, where Futhu and his family lived. Dunse Para was composed of these four smaller villages, the roughly 1,000 homes arranged around straight, neatly plotted footpaths running through groves of trees. Dunse Para sat about a mile away from the nearest Rakhine settlement of about 100 households, also called Koe Tan Kauk, with a security checkpost stationed between. As far as Futhu had been able to verify, the land they lived on had been theirs for generations.

Once Futhu was satisfied with his documentation of the land, he turned to the stories of the people themselves. He went back to his grandfather and the elders in order to diagram the village’s family trees. He listed names and birth villages: a mother’s village, a father’s village and the children they had, the siblings of the mother and the father, backward and forward in time, until his chart sprawled across several villages. He found that in some cases, people who lived in the same village were actually related to one another through blood, though they did not know it. Or in others, that people were related by blood, but not in the way they thought. This was true in his own family. A girl whom Futhu had grown up calling his sister was in fact his cousin. Her father’s grandmother and Futhu’s mother’s grandmother were sisters, and then she was married off to another family. Futhu also found people who had relatives in different villages whom they had never met. Futhu would follow one little family’s bloodline until it grew like vines across the mountains.

The residents of Dunse Para did not always understand the value of Futhu’s inquiries. They asked him why he was always writing things down — was it perhaps for some kind of sorcery? But when they needed a question answered, about who was related to whom and how and when, they came to ask him, and he would explain. Slowly, as Futhu’s notebooks filled, then multiplied, these small proofs wove a larger web of authenticity — a document of roots in this earth, of offspring, ownership and belonging.

Dunse Para had no books that could have explained to Futhu that outsiders had documented the presence of the Rohingya community as far back as the 18th century. In 1799, Francis Buchanan, a Scottish physician living in India, visited what was then called Arakan and wrote that two groups populated the area — the “Yakein” and the “Rooinga.” (This record is crucial, and as such highly contested in the debate over who was or wasn’t in Burma before the British arrived, and thus, who is and who isn’t “offspring of this land.”)

Futhu knew that the British began to wrest control over Rakhine State’s present territory in 1824, but he did not know that it would take them six decades to take the rest of Burma, which became a province of India, with open borders between the two. The British encouraged migration from India, which at that time included present-day Pakistan and Bangladesh, rewarding Muslim arrivals with high posts that drew the envy and ire of locals. Still, everyone in the community talked about life under the colonizers as a time of prosperity and peace. 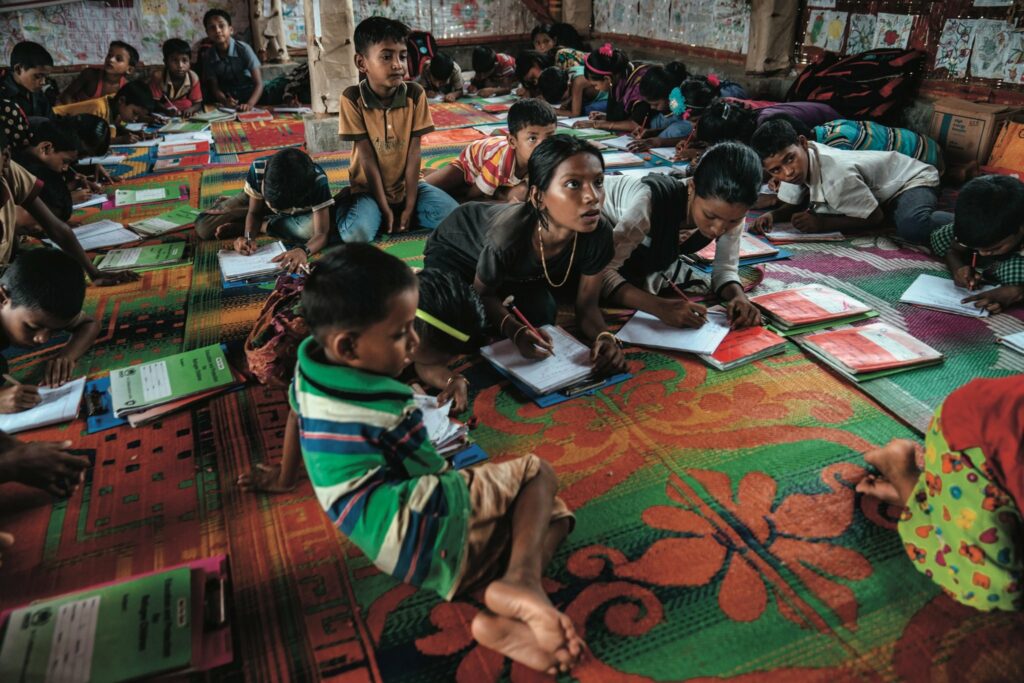 A Burmese language class being taught by a former student of Futhu’s in the Rohingya refugee camps in Bangladesh. Adam Dean for The New York Times 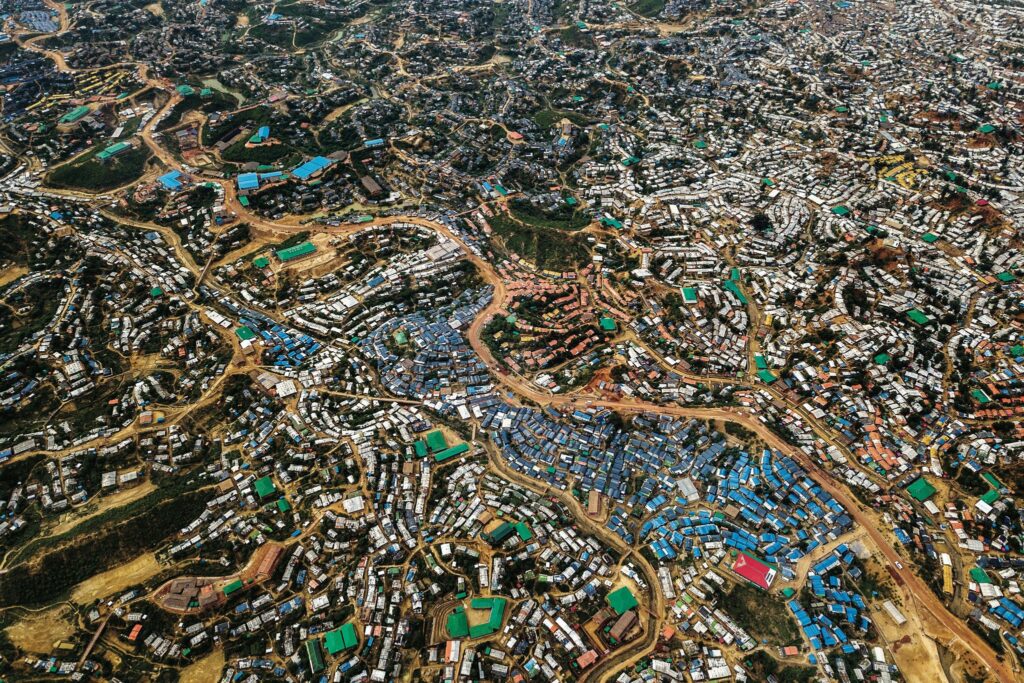 The Kutupalong Rohingya refugee camps in Bangladesh. Many Rohingya say they will refuse to be repatriated to Myanmar if their ethnicity does not receive official recognition and the accompanying rights.
Adam Dean for The New York Times