23 Sep 2019 – The White House recently announced plans to ban flavoured e-cigarettes – except for tobacco-flavoured products – because of a rise in the number of middle and high school students using these products.

To date, over 20 countries, mostly in South America, the Middle East and South-East Asia, have banned the sale of e-cigarette products. Some countries have also banned possession of these products. Thailand has the strictest laws, while countries such as Australia, Canada and Norway have introduced many restrictions.

Research suggests that e-cigarettes may help smokers quit regular cigarettes benefiting their long-term health. But young people who have never smoked traditional cigarettes are taking up e-cigarettes, which are available in over 1,500 flavours, including bubble gum and candy floss. In a survey of US youths aged 12-17, 81% of e-cigarette users reported that the first product they ever used was flavoured and that they use e-cigarettes because “they come in flavors I like”.

Because of the highly addictive nature of nicotine, there is a risk that young e-cigarette users might switch to using traditional cigarettes. Indeed, some healthcare professionals refer to e-cigarettes as a “gateway drug”. 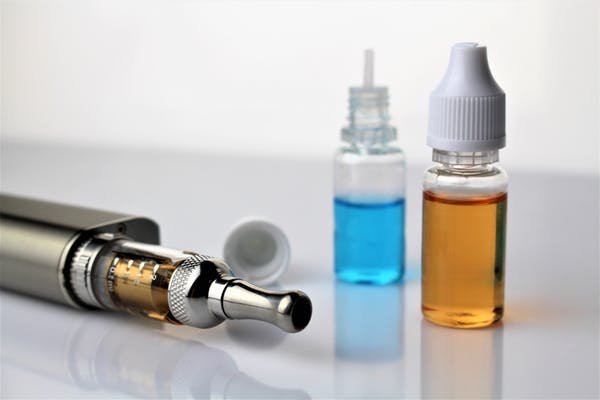 There are over 1,500 e-cigarette flavours. Many of which appeal to children. Ulf Wittrock/Shutterstock

E-cigarettes create an aerosol by heating a complex solution of chemicals, comprising oils, flavouring and nicotine. The fine particles released in the vapour are similar in size and concentration to tobacco smoke and so can reach deep into the lungs. Several of these chemicals are toxic to cells, but what makes research into their safety difficult is that each product is very different with the final composition of chemicals being determined by the temperature at which the vaping device heats them.

Researchers have found that vaping irritates and inflames the airways, leading to the production of a greater amount of mucus and an increase in tissue-degrading enzymes called proteases. High levels of proteases can destroy sensitive lung tissue and reduce the ability of our lungs to function. The resulting damage to the lungs is irreversible and over time can lead to severe lung conditions, including emphysema which is commonly found in chronic obstructive pulmonary disease (COPD). For those who already have a chronic lung disease, such as COPD or asthma, vaping has been linked to an increase in the severity of symptoms.

Read more: Fake e-cigarette liquid is putting vapers at risk – here’s how we can tackle the fraud

Another study found that proteases are stimulated by e-cigarette vapour. The vapour was prepared from different e-cigarette brands and then used to treat isolated white blood cells in the lab. Levels of the enzymes were found to be similar to or more than when the cells were exposed to an extract prepared from cigarette smoke. The increase in enzyme levels was also found with nicotine-free e-cigarette products suggesting that other components in the e-cigarette vapour were responsible.

A recent US study, published in the American Journal of Respiratory and Critical Care Medicine, investigated the effect of chronic e-cigarette use on markers of lung injury in the airways of vapers. Proteases linked to tissue damage were increased in both smokers and vapers, compared with non-smokers.

The problem with investigating the potential harm of e-cigarettes is that there is such a vast array of products, devices and flavourings that it’s impossible to create a “standardised exposure”.

According to a report by the US Surgeon General, 97% of young vapers used a flavoured product in the previous 30 days. Individual e-cigarette products are reported to have over six flavouring chemicals with the sweetest flavours having a significantly higher number of compounds.

Tests of 166 e-cigarette products showed that one in five (21%) contains flavouring chemicals (benzyl alcohol, benzaldehyde, vanillin) that can be toxic to the airways. Several other toxic chemicals were also found and measurable levels of tobacco-specific nitrosamines (TSNAs), an important group of carcinogens in tobacco products, were in 70% of the products tested. The effect of inhaling these complex mixtures of chemicals will be very difficult to determine.

Read more: Vaping could be a trojan horse for real cigarettes

The recent reports of deaths in the US associated with vaping fans further concerns on safety. The CDC has reported a rising number of cases (530 across 38 states) of a mysterious “lipoid” (presence of fat in the lung) pneumonia, most of which have occurred in young men who vape, and which has been linked to eight deaths. But it is worth noting that some who have developed lipoid pneumonia admitted that they vape THC (the active ingredient in cannabis), although others have insisted that they only used nicotine products with their e-cigarettes.

One substance called vitamin E acetate has been identified in all the samples tested by New York state health officials, but there isn’t enough evidence to say if this is the cause of disease. And so far, no cases of lipoid pneumonia have been reported outside the US.

The evidence to date suggests that vaping is not a safe alternative to smoking tobacco. This, coupled with the worrying trend of young, previous non-smokers being attracted to vaping, raises fears of yet another generation suffering from chronic lung disease. Indeed, a recent study in The Lancet estimates that in 2040, COPD will be the only disease in the top ten leading causes of death that will still be increasing. Although how much will be driven by vaping remains to be seen.