Greta Thunberg, Frances Crowe and a Passing of the Torch

29 Aug 2019 – Greta Thunberg, a 16-year-old Swedish climate activist, sailed into New York Harbor yesterday after an occasionally harrowing, two-week trans-Atlantic voyage. Greta walks the walk, living her life with as small a carbon footprint as she can. She decided to forgo flying as part of that commitment, so, in order to make it from Europe to North America, she sailed on a zero-emissions racing yacht.

The day before Greta’s arrival, on Tuesday [27 Aug], another activist ended a remarkable voyage. Frances Crowe, a lifelong peace activist, died at home in Western Massachusetts, surrounded by her family, at the age of 100. Frances was a firebrand, a nonviolent warrior for justice, arrested countless times protesting war, nuclear weapons, nuclear power plants and more. 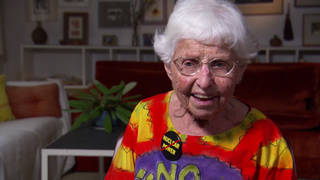 The departure of one elder activist on the eve of the arrival of one so young symbolizes, bittersweetly, the passing of a torch.

Frances was born just months after World War I ended. “My mother told me she took me to my first march when the soldiers came home,” she wrote in “Finding My Radical Soul,” her memoir. “I was only a baby, but I have always had the feeling that war has defined my life.”

Her husband, Tom, was a medical doctor. Speaking on the “Democracy Now!” news hour in 2005, she described a pivotal moment in her life, Aug. 6, 1945, the day the United States dropped an atomic bomb on Hiroshima: “I was a bride. My husband was in the Medical Corps in the Army. He had told me a few weeks before that he had heard rumors that we were developing this incredible weapon. He was at sea when we dropped the bomb, but I was alone in our apartment in New Orleans. When I heard it on the radio, I unplugged the iron, left the place mat that I was ironing and went out looking for a peace center in the streets of New Orleans.”

From that day, at the age of 26, until she died, Frances Crowe never relented in her pursuit of peace and justice. She was a war tax resister, refusing to pay taxes to support the sprawling Pentagon budget. She opposed South African apartheid and U.S. intervention in Central America in the 1980s and in Iraq and Afghanistan in the 2000s. She climbed fences into the Seneca Army Depot, and was arrested for pouring her own blood on a newly built Trident nuclear submarine just before it was launched in Connecticut. 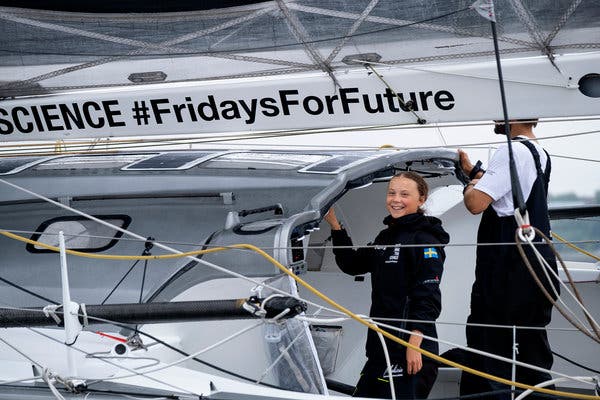 Greta Thunberg, Climate Activist, Arrives in N.Y. With a Message for Trump
The New York Times

Wednesday, at Manhattan’s North Cove Marina, a vessel of a different kind arrived.

Hundreds of young climate activists cheered as Greta disembarked, standing on terra firma for the first time in two weeks. “The ground is still shaking for me,” she said as she opened her press conference.

“The climate is an ecological crisis, a global crisis, the biggest crisis humanity has ever faced,” she said. “If we don’t manage to cooperate, to work together despite our differences, then we will fail. … Let’s not wait any longer. Let’s do it now.”

We first met Greta at the U.N. climate change summit in Katowice, Poland, last December. She explained then on “Democracy Now!” that, because of her Asperger’s, “I work a bit different. I see things in black and white. I guess I saw the world from a different perspective.”

She focused intently on the worsening climate crisis, even suffering debilitating depression around the age of 11. “I got out of that depression by promising myself that I’m going to do everything I can to change things,” she said Wednesday.

That determination led her to launch a school strike for the climate, skipping school every Friday to stand in front of the Swedish parliament, demanding action to prevent catastrophic climate change. Her protest spread, quickly going global. Hundreds of thousands of schoolchildren around the globe have participated in their own, local school strikes for the climate.

This Friday, Greta will join kids in New York at their monthly strike outside the United Nations. A global strike for the climate, expected to be one of the largest global protests in history, will take place on Sept. 20. After that, Greta will make her way, using “a lot of trains, buses and probably even sailing,” she
explained, to the next U.N. climate change summit in Santiago, Chile, in December.

Greta’s work as an activist is just beginning. She is a living example of what Frances Crowe said not long ago: “There is something else also to life, the joy of struggle, that not enough people have tasted. The joy of community, and the joy of cooperation, instead of competition; these are the values that I want to perpetuate and talk about to young people.”

Frances Crowe, rest in power. Greta Thunberg, long may you carry the torch.