Rights groups warn of possible humanitarian crisis as those left off list face statelessness and detention. 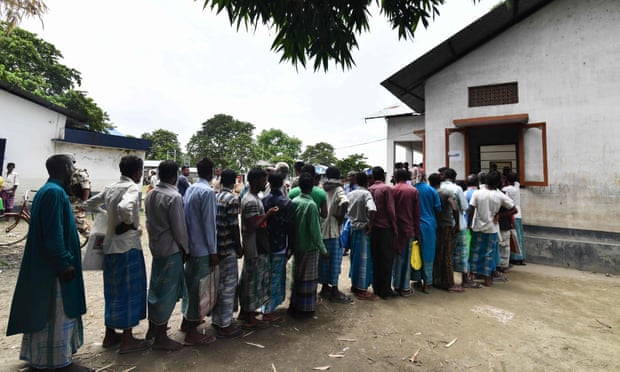 People stand in a queue to check their names on the final list of the National Register of Citizens in an office in Pavakati, Morigaon district.
Photograph: Biju Boro/AFP/Getty Images

31 Aug 2019 – Almost 2 million people in north-east India face the threat of statelessness and detention after they were excluded from an official list designed to root out illegal immigrants.

Security was heightened in the border state of Assam on Saturday, as millions of people waited for the final release of the National Register of Citizens (NRC) – a major bureaucratic exercise that rights groups warn could create a humanitarian crisis.

Over the past four years, about 33 million people in Assam have been forced to prove they are citizens by demonstrating they have roots in the state dating to before March 1971. An official website crashed as people across the state logged on to discover their status, while others queued in the rain at local centres.

Lawyers have raised serious concerns over the process, which they say has wrongly excluded people on the basis of minor clerical errors in decades-old documents. There are fears that Muslims, women and the poorest communities could be the worst affected.

Many of the people left off draft versions of the list were born in Assam and have families that have lived there for generations, according to campaigners. Saibul haq Sikdar, a teacher from Barpeta district in western Assam, read online on Saturday that his name had been rejected. He is the only person excluded in his family, who have lived in Assam for generations.

“More than anger I am very sad, because being a citizen of a country and having it declared that you are a foreigner, you don’t know where you stand at this moment,” said Sikdar.

“[I] have to find my own way out,” he said, adding that as the most educated person in the family, he is the one relatives rely upon for guidance.

The registry authorities said in a statement that the list had been “meticulously carried out in an objective and transparent manner”. About 1.9 million people were excluded.

It is not clear what will happen to those who lose their appeals at foreigners tribunals, though many fear they could face detention. There are already several detention facilities in Assam’s prisons, and the state reportedly plans to build an additional 10 camps to house those declared to be migrants.

Mithun Deb, from Bongaigaon, said his mother, Alorani, had been in a detention centre since 2016, when her citizenship was questioned.

“When we enter the home at night it feels empty. Mother is not there. Not a single night goes when we don’t cry, me and my brother, wondering in what condition she is sleeping, or how she is staying away from us,” he told the Guardian on Friday night. Alorani was excluded from a draft version of the NRC, even though her sisters were included.

Anyone excluded from the final list has 120 days to appeal against the decision through a foreigners tribunal, but campaigners say these bodies are vulnerable to political pressures and have produced arbitrary judgments.

Teesta Setalvad, the secretary of Citizens for Justice and Peace, a group that is supporting affected communities, said the tribunals should be made more transparent, and that a more realistic deadline for appeals is needed.

“It is a nightmare. I cannot even think of how it is going to be possible,” she said.

“If the authorities are serious about a proper and fair process they should not hold the threat of a time-bound process over the heads of poor and unlettered people,” said Setalvad.

The register was primarily targeted at people whom authorities describe as illegal immigrants from Bangladesh, which shares a border with Assam. There is significant resentment towards immigration in the state, and there was an anti-migrant movement in the 1980s.

Amnesty International said it was unrealistic to expect people from the poorest communities, who may have been internally displaced by violence or natural disasters, to preserve half a century-old records.

The process is also weighed against women, campaigners said, because they often lack access to necessary documents, and because the ones they do have are incorrectly given less weight by authorities.

Aakar Patel, the head of Amnesty International India, warned the state of Assam is “on the brink of a crisis which would not only lead to a loss of nationality and liberty of a large group of people but also erosion of their basic rights”.

There are concerns that Muslim communities could be worst affected. Separately from the register, the governing Bharatiya Janata party is pursuing a citizenship amendment bill, which aims to give citizenship to religious group such as Hindus, Sikhs, Buddhists and others who are minorities in neighbouring countries – but not to Muslims.

In its manifesto the BJP also promised to introduce NRC elsewhere in the country, though some BJP leaders in Assam have criticised the process. India’s home minister, Amit Shah, has previously promised to deport immigrants, describing them as “termites”.