Inside Exarcheia: The Self-Governing Community Athens Police Want Rid of

The central Athens neighbourhood of Exarcheia, which has helped house refugees, is in the crosshairs of a government crackdown. 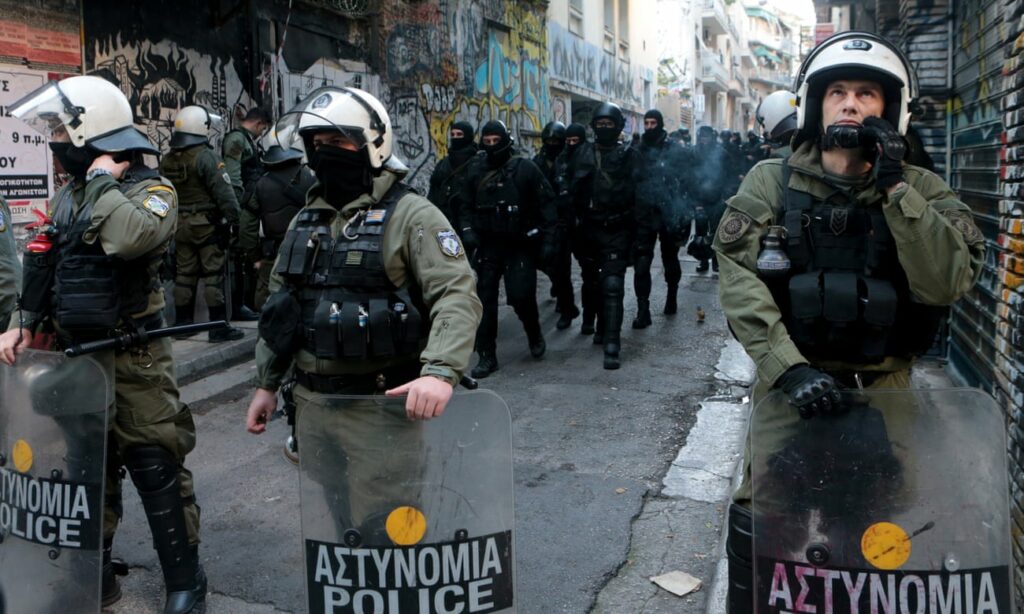 Athens police enter Exarcheia in April 2019 to carry out evictions of squatters, some of whom are refugees. Photograph: Pantelis Saitas/EPA

26 Aug 2019 – It’s just after 5am in the central Athens neighbourhood of Exarcheia. A group of Afghans and Iranians are sitting down together for breakfast in the middle of the street, with a banner that reads “No Pasaran” (“They shall not pass”) strung between the buildings above their heads. They laugh and joke as they help themselves to bread and cheese pies from the communal table.

The public breakfast is outside Notara 26, a self-organised refugee accommodation squat. Since opening in September 2015, at the height of the refugee crisis, it has provided shelter to over 9,000 people. These ‘‘Breakfasts of Resistance” – held in the early hours when police-led evictions are most likely – have become daily events since Greece’s New Democracy government assumed office in July.

“[The squat] is important for me because I feel a little more human. We have space to sleep, neighbours and a neighbourhood around us.”
— Saif, refugee

A promise to “restore law and order” was one of the campaign themes that swept the right-wing party to power. Swiftly making good on this, on 8 August plans to evict all 23 refugee and anarchist squats in Exarcheia were announced.

If carried out, by the end of the month they will have put an end to Athens’ experiment with autonomous urban governance and its grassroots refugee solidarity network, which currently houses over 1,000 people.

Ringed by university buildings, Exarcheia has long been the home of Greece’s intellectual left, antiauthoritarian and anarchist movements. 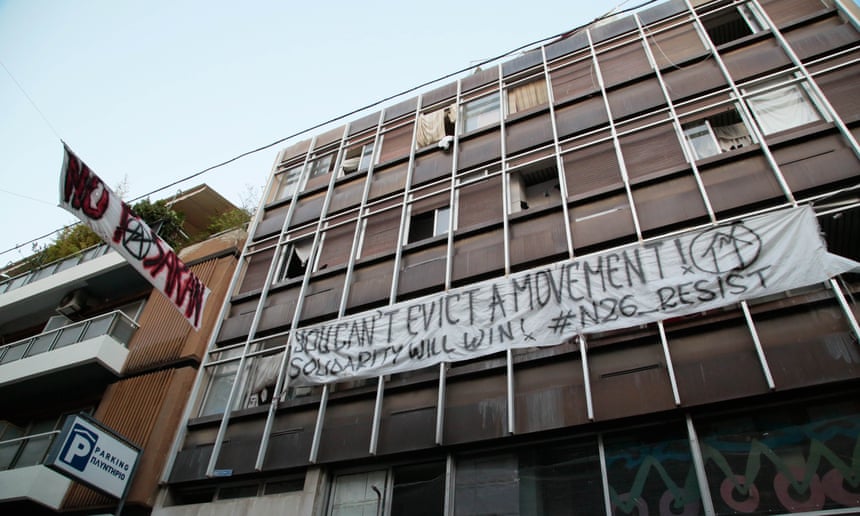 Passing the squads of riot police who stand constant guard on Exarcheia’s perimeter underlines that this is not a typical neighbourhood. It is the site of regular skirmishes between teargas-wielding police and molotov-cocktail hurling youths who are eager to vent their frustration at Greece’s dire economic and political situation.

Yet, in a country where far-right and state violence against migrants is well-documented, the lack of visible police presence inside Exarcheia and its vocal antiracist stance have created a place of relative sanctuary.

“I am so happy here, I feel safe,” explains Sana*, a squat resident from Afghanistan. “Here we work together and have a good life.”

Thousands of refugees arrived in Athens in summer 2015. Seeing little response from the state, the anarchist squat movement in the area (which dates back to the 1980s) resolved to open empty buildings in Exarcheia to house refugees. Notara 26 was the first, and was soon joined by others, founded on the same principles of autonomous self-organisation.

The squats offer a viable alternative to official refugee camps, hotspots and detention centres, whose conditions have been widely condemned by international observers. 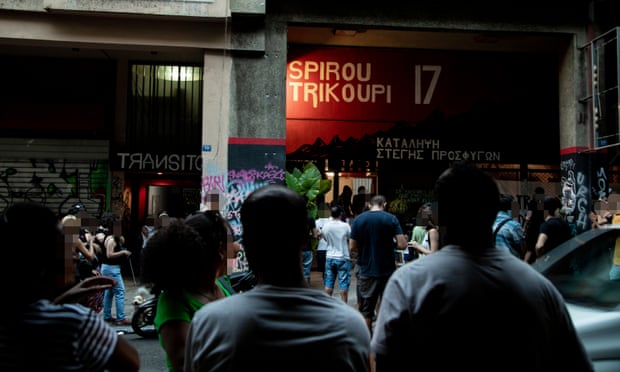 The Sprirou Trikoupi 17 squat, one of the 23 anarchist and refugee squats currently occupied in the Exarcheia neighbourhood of Athens. Photograph: Jose Márner

“I visited the camps as a volunteer,” explains Saif*, a 31-year-old recognised refugee from Gaza who lives in a squat. “You’re not a refugee there, you feel like you are in prison – and they’re full. [The squat] is important for me because I feel more like home, I feel a little more human. We have space to sleep, neighbours and a neighbourhood around us.”

In opposition, New Democracy attacked the Syriza administration’s handling of the refugee crisis, capitalising on security fears and frustration at Greece having to shoulder a disproportionate share of responsibility.

In government, they have stepped up border enforcement,have for the moment revoked asylum seekers’ rights to access health and social security services, and dissolved the ministry of migration, transferring responsibility for refugees to the ministry of citizen protection, which also oversees the police. 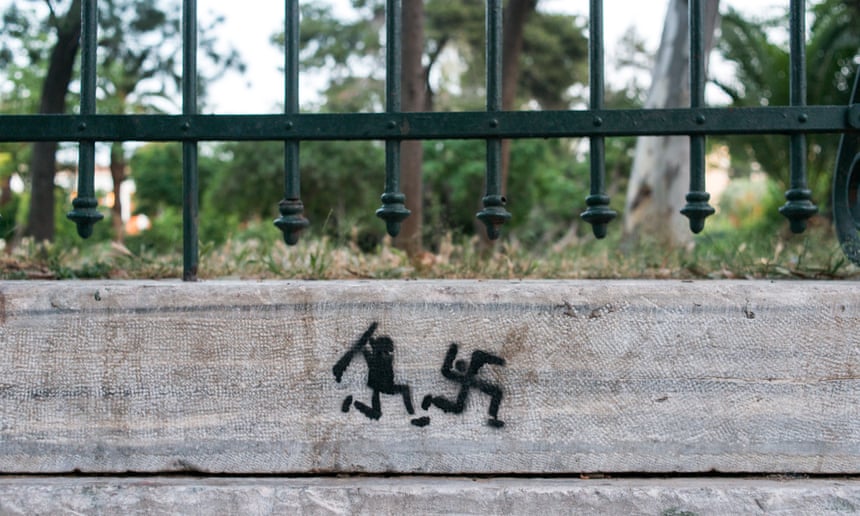 In a country where far-right violence against migrants is well-documented Exarcheia’s its vocal antiracist stance have created a place of relative sanctuary.
Photograph: Stéphane Burlot

However, it was under Syriza that the strategy of criminalising the refugee squats began. A wave of evictions by heavily armed police occurred in early April affecting over 300 people. Most squats in Exarcheia operate under a no drugs/no alcohol policy. Yet, timed simultaneously with nearby anti-drug operations, most media reports connected the squat evictions with drug dealing.

“Where are they going to relocate all the refugee children and families? The camps are full.”
— Panos, activist

Promising to “clean up Exarcheia,” New Democracy’s rhetoric has conflated drug dealers, criminals, anarchists and migrants. One of the government’s first actions was the controversial repeal of the academic sanctuary law, which incoming prime minister Kyriakos Mitsotakis claimed made campuses crime hotspots and no-go zones for police. Critics saw the move as an attack on political liberties and Exarchia, rather than on crime.

Drug dealers and criminal gangs have exploited the lack of visible law enforcement in Exarcheia. Local activists have made many attempts to improve the situation around the square, such as planting trees, organising screenings and concerts, and making night patrols, but many acknowledge the situation has deteriorated in recent months. 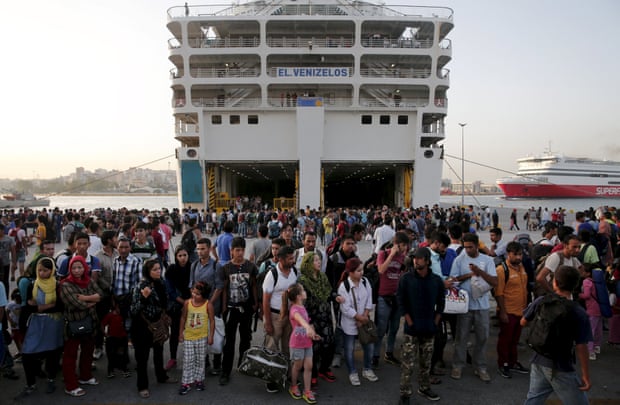 Refugees and migrants escaping the war in Syria wait at Piraeus at the start of the refugee crisis in 2015. Photograph: Alkis Konstantinidis/Reuters

Together with the squat evictions and anti-drug operations, authorities have announced plans that include repainting graffiti-covered areas and improving street lighting – none of which require evictions, activists argue. The Hellenic Police refused to comment on specific operations.

Despite ongoing threats, no evictions have yet occurred this summer. However, there has been a noticeable escalation of police activity in the area, with almost daily operations on and around the square.

Those arrested for immigration violations have been taken into detention. New Democracy have announced they will start deporting failed asylum applicants. 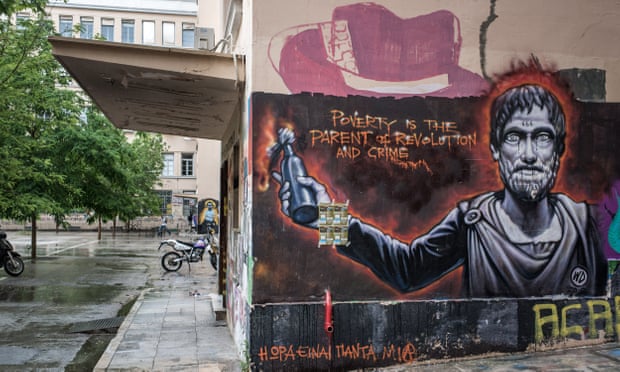 Plans to repaint Exarcheia’s graffiti-covered areas and improve street lighting have been announced by the authorities. Photograph: Stéphane Burlot

“They have used criminality, prejudice towards refugees and even accusations of terrorism to discredit the left resistance in Exarcheia,” says Panos*, an activist who helped open Notara 26 back in 2015. “Personally, I don’t think they will be successful. The political cost will be great and where are they going to relocate all the refugee children and families? The camps are full.’’

Athens has emptied for the summer. Shops are closed and it feels like a hot and sticky ghost town. But on Exarcheia Square, there is a palpable air of tension, as those gathered know another police operation could occur at any moment.

Around the corner, the boarded-up Azadi squat, empty since the April evictions, has been covered with a mural depicting anarchists facing off against riot police and the slogan: “Exarcheia will win.” Time will tell.

*Names of interviewees have been changed to protect their identities. Notara 26 did not agree to participate in this article.