While Britain’s Parliament Is Suspended, Its Arms Fair Is Open for Business

In any other week, the world’s largest arms fair would be big news in the United Kingdom, but that hasn’t stopped protesters from disrupting its arrival. 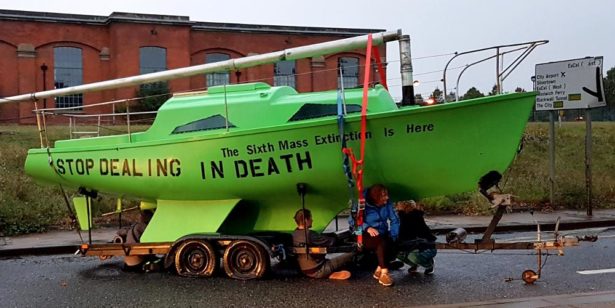 Activists with Trident Ploughshares and Extinction Rebellion used a boat to shut down a road in London last week, preventing arms dealers from reaching the DSEI fair.  (Twitter/@CNDuk)

9 Sep 2019 – In any other week, the arrival of the world’s largest arms fair to Britain would have been big news. Thirty-six thousand people are expected to attend the Defense and Security Equipment International fair, which opens on Tuesday [10 Sep]. More than 10 percent of the governments on the official invite list are recognized by the U.K. government as having seriously problematic human rights records. Among them are Bahrain, Saudi Arabia, Israel and — until they withdrew their delegation — Hong Kong.

But this hasn’t been an ordinary week. United by the decision to suspend Parliament — a move that was labelled by opponents as an attempted coup — MPs used their remaining few days together to pass legislation designed to impede a “no deal” exit from the European Union. Prime Minister Boris Johnson’s threat to sack politicians of his own party who supported the measure backfired when Parliament also refused an immediate election, leaving Johnson stranded without a majority.

While the tanks on the streets en route to the fair might not have received much media coverage, the new prime minister’s misogynist-militarist language has. It began when he branded the law discouraging “no deal” a “surrender bill.” It was then revealed that in cabinet papers he had called former Prime Minister David Cameron a “girly swot” and — while sitting in Parliament — decided to goad opposition leader Jeremy Corbyn by calling him a “big girl’s blouse.”

These jibes might seem a long way from the tanks and guns of war, but the peace movement has long pointed out the link between toxic masculinity (especially hetero-masculinity) and militarism. In the schoolyard male status has been typically defined by willingness to engage in fighting, and boys who refuse to inflict pain on others have been called “girl” or “faggot.” This is the start of socialization to a world in which most of the world’s soldiers are men, as are the majority of the politicians who send them to war. Meanwhile it is often women who are the worst affected by armed conflict.

In pursuit of a more peaceful world, seven consecutive days of protests have disrupted deliveries to the exhibition center where the arms fair is held. Peaceful sit down protests in the road have led to more than 100 arrests with hundreds more taking part. A notable aspect of the organization of the actions is an emphasis on co-operation, welfare and mutual support.

The borough council for the area where the arms fair happens has voted to do all it can to stop the arms fair from returning. In perhaps the most high profile intervention, London Mayor Sadiq Khan has called the fair “abhorrent” and said he too will take any opportunity available to prevent the arms fair in future. Maleness and militarism don’t need to go together.

It is cruelly symbolic that even as the prime minister closes the doors on Parliament, his government opens the doors of the arms fair. By its presence though, the peace movement has shown that there’s a different way of doing things waiting at the gate.

Tim Gee is a writer and activist based in the UK. His third book Why I am a Pacifist is published by Christian Alternative.