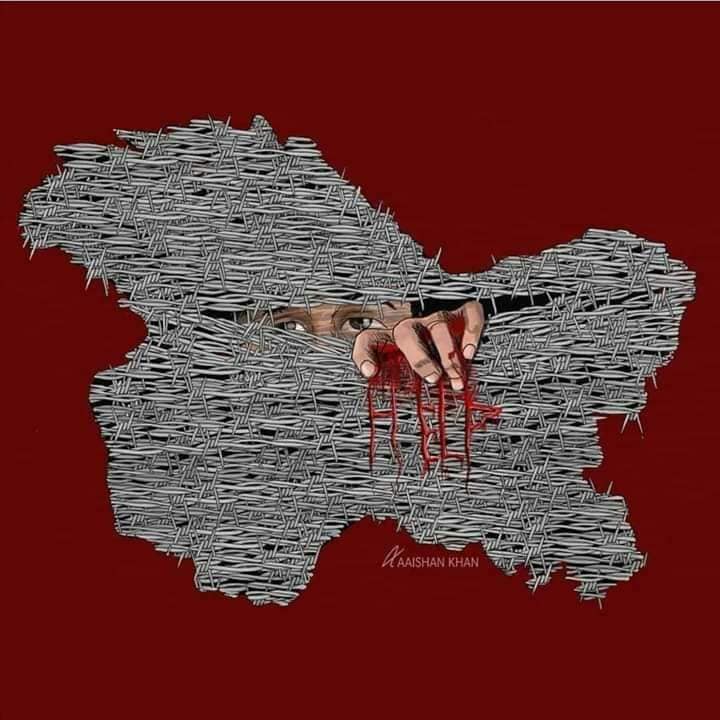 19 Oct 201 9 – Kashmir has been cut off from the rest of the world for more than two months now, with little certainty about what is coming next.  Kashmiris living in and outside the erstwhile state of Jammu and Kashmir remain disconnected with hardly any means to communicate with each other. Just a few days ago some mobile connectivity was restored.  Terrible stories of loss, grief, and mourning are making rounds on social media, few news outlets, and mostly within the minds of Kashmiris.  The days of siege have become another statistic with most losing count.  People are hearing about the deaths and ill-health of their loved ones with little detail or ability to make it to the funeral or the bedside.  No one is talking out about the children stuck in homes, shut schools, and not to mention those beaten, tortured, and incarcerated.  People with chronic and acute diseases are dying undocumented with only God to blame.  The collective punishment of Kashmiris is working.

The perpetual worry about that ‘phone call’ has traumatized so many.  One fears that people are developing traumatic stress even when not physically present in the valley.  Even when people do manage a phone call after begging or borrowing, the harrowing silence on the other side says it all.  Although most people talk about everything being well, the deafening silence you hear even when words are being spoken is unmissable.  How does a nation reconcile and sleep at night with this travesty in their name?  Here a billion or more souls if not always celebrating, are content with what is being done to millions of other human beings in an alleged part of the same country in their name.  Who shares the blame if something wrong is happening?  The home minister of India declared that ‘It is all in your mind’ and everything is ‘normal’ in Kashmir.  You may refuse to agree with him but most of the Indians, educated, illiterate, liberal, religious, atheists, left-wing, right-wing, rich, poor, men, and women are convinced that Kashmiris need disciplining and that this is for their best.  How does one argue with that?

Most Indians are ordinary, hardworking, friendly people, who claim to love animals and would not harm a fly.  How do they reconcile with what their state is doing to fellow human beings?  Indian friends, the close ones, like others, decided to remain silent.  They would not even ask if the family was alright and did we manage to get in touch.  They will bleed for you in case of an accidental injury to you and will remain by your bedside till recovery.  But what is happening here then?  What kind of morality has been created?  Would sympathizing with Kashmiris mean a betrayal of their own country?  What about the claim of belonging to the same country?  Please feel free to ponder. Something has happened.  Somewhere the fear of the other has been used so convincingly that it has managed to break all the bonds, be it of friendship or simply of being human.  After all,India claims to be the propagator of vegetarianism, desperately trying to save cows even if that means ignoring the lynching of fellow citizens while practicing ahimsa and non-violence.

Lately, the concept of the ‘nation first’ is doing rounds.  Nothing can be said or written against ‘the nation’. But what makes the nation; the current ruling party and the Prime Minister, the land, or the idea of a map in one’s head?  Or it is the religion of the majority, the conquest of minorities or something else. What about the people who live in that besieged piece of land?  Do they also make the nation?  Maim, punish, and kill people to save the nation from some unknown force.  Does the nation need saving or a self-fulfilling prophecy of destroying the nation is in action?  Treating Kashmiris as an extension of the neighbouring country and punishing them collectively to revenge generational hate for the neighbour only proves Kashmir is not part of the ‘alleged nation’ on whose name all this is being done.

History is a witness that nationhood was used by most tyrants, convincing the majority using fear, prosperity, and superiority as tools to rise to power.  Once in power, unimaginable things were done in the name of the nation, building on the fear of minorities and weaker sections.  Although none of the fascists remained to live their dreams and were victims of their own cruelty, but in the process the death and destruction they managed to offer humankind is unimaginable.  Once they are done with one group, they do have to go after others.  You cannot fathom that a fire set in a neighbour’s backyard will not spread to burn the whole village.  It has already started, people are even being booked for writing open letters, and students are being thrown out of colleges just for some minor criticism of the dear Prime Minister.

The generational trauma, displacement, and human suffering change the course of history both for good and bad.  What is then the solution, dignity in living or living with dignity?  It does not take long to realize that putting others through pain and suffering does not make any nation happy.  You may think that whatever is happening has nothing to do with you, but everything done in your name is your burden.  More so, instead of thinking and questioning, blindly condoning the state action seals the deal.  Some argue that if Kashmiris did not create trouble, in other words, aspire for freedom and demand a referendum as per the promises made to them by all the parties involved, Jammu & Kashmir will still have been a statehood the least. Blaming victims is not a new strategy.  Like Kashmiris have a choice to decide.  They are still to make to the table allegedly meant to decide on their fate. Who does not desire freedom?

Lastly, it is not late to question yourself, if not the state.  Are you sure you know what is being done in your name?  Are you the nation or the next victim of the nation?  If you are the nation, then own it and live with the consequences.  Democracy cannot be imposed, neither can freedom.Everyone knows it is not about development, freedom of women or education of youth.  Neither is it about terrorism as mostly purported to slander Kashmiris.  There is still time to question the alleged truth unless you have decided to be the hangman in a mask.

Dr Mudasir Firdosi is a Kashmiri psychiatrist and writer currently based in London. mudasirfirdosi@gmail.com