On Racism and ‘Wild Beasts’: Why Israel Besieges Palestinians 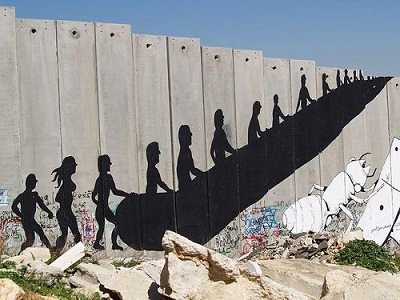 8 Oct 2019 – The Israeli Apartheid Wall, which is being built largely on occupied Palestinian land in the West Bank and East Jerusalem, once more underscores the ugliness of military occupation. As such, it truly epitomizes the nature of Israeli apartheid and also delineates the siege-driven, isolationist mentality that dominates the ruling-class thinking in Israel.

Even years before the establishment of the state of Israel over the ruins of the Palestinian homeland in May 1948, Zionist communities in Palestine perfected the stratagem of besiegement, isolating themselves behind massive walls while blockading Palestinians, the native inhabitants of the land, in every way possible.

Throughout the Nakba – the catastrophic ethnic cleansing and destruction of Palestine in 1947-48 – Israel used this military theory in abundance. Neighborhoods, villages and entire towns would be besieged for days, weeks or months while being bombarded from all directions before their residents were finally pushed out. None of these ethnically-cleansed Palestinian communities, which numbered in the hundreds of thousands, were ever allowed to return to their homes.

In fact, besiegement and isolation remain at the core of the Israeli military strategy to date.

No other place, however, endured the brutality of the seemingly never-ending siege like the Gaza Strip. Gaza, that small region of 365 square kilometers, has been under various stages of besiegement and blockade since 1948.

The most hermetic stages of this perpetual siege began sometime in 2006 and intensified in the summer of the following year. Three factors make the latest siege on Gaza particularly horrific: its long duration, the lack of any serious respite for besieged Gazans and, most importantly, the fact that it has been interrupted by massive Israeli wars that killed and wounded thousands of Palestinians. With much of Gaza’s infrastructure destroyed or dilapidated, the Israeli blockade on the Strip has proved to be the most savage and deadliest of all sieges.

On 30 September, Israel’s Channel 12 reported that nearly 70 percent of an underground barrier east of Gaza is now complete. An estimated 1,400 Israeli and foreign workers are reportedly taking part in building the barrier, which when finished, will extend to reach 60 kilometers in length.

Considering the layers of walls, fences, trenches and no-go military zones, the additional underground wall around Gaza seems frivolous. Is it possible that Israeli leaders truly believe that Gaza is not isolated enough?

In actuality, the latest wall will likely satisfy a psychological, not a practical objective, as it gives the Israeli army and southern settlements a temporary sense of safety, while once more hailing Israeli leaders as the protectors of a defenseless and exposed nation.

Oddly, while scores of young Gazans continue to be killed at the fence separating Gaza from Israel while protesting the Israeli siege on the Strip, it is the Israelis who claim to be targeted, unsafe and victimized.

The newest wall, once it is officially launched with massive fanfare, will still make no difference. It will not upgrade the status of the Gaza siege in any way, nor will it alter the collective fear that has been thoroughly instilled in ordinary Israelis.

For Gazans, wall or no wall, the siege will remain intact.

Israeli wall architects may argue that the latest wall will deter Palestinians from digging tunnels as well as preventing resistance fighters from circumventing the siege via the sea – since part of this underground barrier will also extend into the Mediterranean Sea.

However, there is no proof that walls or fences, overground or underground barriers have prevented Palestinians from retaliating against Israeli attacks. If the Israeli logic holds any truth, Palestinian resistance would have dissipated or folded decades ago as the Israeli siege mentality was put into practice from the very start of the Israeli war on the Palestinian people.

Israel receives $3.8 billion in US funding, in addition to hundreds of millions in loans and other financial giveaways which are mostly used to fortify Israel’s so-called security. To no avail. Palestinians, impoverished and incarcerated in Bantustan-like structures and open-air prisons, continue with their resistance unhindered.

It is clear that the Israeli security model has failed. In fact, that model never had a chance of success in the first place. The additional Israeli wall around Gaza and the hundreds of other walls and fences that are yet to be built are only meant to feed the collective illusion among Israelis and their leaders that the answer to their problem does not lie in ending the apartheid regime, military occupation and siege, but in adding more layers of “security”.

“At the end of the day as I see it, there will be a fence like this one surrounding Israel in its entirety. We will surround the entire state of Israel with a fence, a barrier,” Israeli Prime Minister, Benjamin Netanyahu, said on 9 February 2016 during a visit of the construction site of the barrier around Gaza.

Netanyahu added: “In our neighborhood, we need to protect ourselves from wild beasts.”

While such language and behavior reflect the deeply-rooted racist mentality at work in Israel, they also underscore the dehumanized way in which Israel sees Palestinians. Since “wild beasts” are not human, they can be killed en masse, besieged and ethnically cleansed in their millions without an iota of regret or remorse.

The problem then is not that of “security” or so-called “terrorism”. Not that of Hamas, or any other group, secular or Islamist. It is not that of Gaza’s March of Return or of children approaching the fences around Gaza. The problem is the entrenched Israeli racist mentality that perceives Palestinian natives as sub-humans and as “wild beasts” to be exterminated or forever besieged.

Dr. Ramzy Baroud has been writing about the Middle East and global issues for over 20 years. He is an internationally-syndicated columnist, a media consultant, an author of several books and the founder of The Palestine Chronicle. His books include Searching Jenin, The Second Palestinian Intifada, and My Father Was a Freedom Fighter: Gaza’s Untold Story. His latest is The Last Earth: A Palestinian Story. Baroud has a Ph.D. in Palestine Studies from the University of Exeter and is a Non-Resident Scholar at Orfalea Center for Global and International Studies, University of California Santa Barbara. His website: www.ramzybaroud.net. Email: info@ramzybaroud.net