Palestinians who look up to post-apartheid South Africa have to critically examine its many failures. 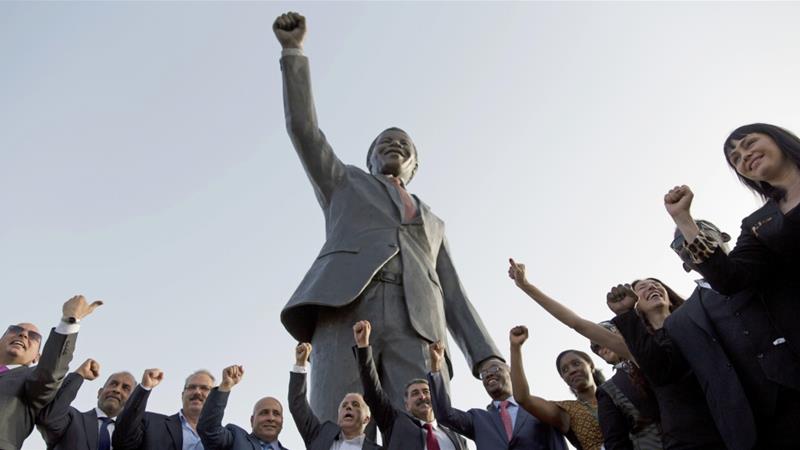 Palestinians pose for a picture with a sculpture of the first democratically elected South African President Nelson Mandela in the West Bank city of Ramallah, on April 26, 2016.  [AP/Nasser Nasser]

4 Oct 2019 – Today, the comparison between Israeli and South African apartheid is as pervasive as it is obvious. Just as South Africa and many other settler colonies did in the past, Israel is now utilising policies of racial segregation and ethnic cleansing to advance and preserve the interests of the colonialists while suppressing and marginalising the basic human rights of the colonised population.

Naturally, the Palestinian liberation discourse has adopted references to the popular struggle against South Africa’s apartheid, while the Palestinian Boycott, Divestment and Sanctions (BDS) movement is also largely modelled around the boycott movement of South Africa.

The relentless resistance and overwhelming sacrifices of South Africans which were made to ultimately overturn hundreds of years of Dutch and British colonialism and racial apartheid are exceptional and praiseworthy. Challenging and officially defeating the powerful and sinister forces that upheld such historic injustice is a tremendous feat. It underscores the unsurmountable power of popular movements and presents a positive example for Palestinians.

However, in the rush to emphasise the similarities between the two experiences – which itself stems from the burning and justifiable desire of Palestinians to achieve their own “South Africa moment” – two major mistakes are being made.

One, Palestinians often misconstrue and romanticise the path of the South African anti-apartheid struggle. Two, there is a widely-shared belief, among Palestinians and their supporters, that the official scrapping of apartheid laws automatically ushered in a new age of democracy and equality in South Africa.

Such perceptions lead to the erroneous assumption that a similar legal victory in Israel can solve all of Palestine’s problems and pave the way for the coveted one-state solution.

This issue occupied my mind during a recent visit to South Africa. While giving lectures on Palestine and the shared struggle of the two nations, I had the opportunity to meet and discuss the South African experience with a number of intellectuals, former anti-apartheid fighters and human rights activists who are part of today’s South African struggle for equality.

In my opinion, Palestinians must hear and examine closely the views of South Africans who have fought and continue to fight for true equality and meaningful democracy, so that they can better understand post-apartheid South Africa and draw important lessons for our own struggle.

One of the main challenges that post-apartheid South Africa has faced is building a nation on the ashes of a regime which was predicated on racial division, marginalisation and oppression.

As South African academics Na’eem Jeenah and Salim Vally explained in their essay, Beyond Ethnic Nationalism: Lessons from South Africa, a common future for the colonialists and the colonised can only be built “when there is agreement that a new nation needs to be forged within a new state”.

“While it might be tempting to talk about the new state now and leave the question of the new nation for some post-liberation phase, this would be a huge mistake. It was postponed in South Africa and South Africans are now living with the consequences,” Jeenah and Vally wrote.

Indeed, while post-apartheid governments in South Africa emphasised symbols of unity and celebrated diversity – such as the rainbow flag – symbolism was not enough to stitch together a nation.

As Enver Motala, associate of the Chair for Community, Adult and Worker Education at the University of Johannesburg pointed out: the “approach to the constitution of nationhood in [post-apartheid South Africa] has often favoured the liberal democratic, aspirational claims of human and legal rights enshrined in a constitution, its symbols, flags and anthems for unification, while leaving untouched the structural arrangements and enduring characteristics of historically entrenched power, and social fragmentation”.

Motala added that the formation of a truly unified state and nationhood can only be possible through “the demobilisation of every conceivable form of social privilege”.

There has been the expectation that dismantling apartheid political structures and introducing democracy would facilitate the nation-building process. But as Karima Brown, a prominent journalist and political analyst, told me, the democratic breakthrough of 1994 was only “the start of deepening democracy and building a more equal, non-sexist and anti-racist order”.

She emphasised the importance of not allowing apartheid colonialism to be replaced with a neo-colonial project that would continue to marginalise various groups and undermine the nation-building effort.

According to a recent World Bank study, South Africa “remains the most economically unequal country in the world”, a sad reality which has much to do with the neoliberal economic model which the democratically elected South African government adopted after 1994 and which is closely associated with the powerful, neo-colonial forces that remain at work in South Africa.

Vally told me that “the fault lines of the present system of inequality in South Africa can be traced to the nature of the negotiated settlement between the erstwhile, dominant liberation movement and the apartheid regime”.

As a result, the end of apartheid law did not change the class formation and power relations in South Africa, as the post-apartheid period witnessed “the continuation of the class character of the state [despite the discourse of human rights, liberal bourgeois democracy and development] and the incorporation of South Africa into a global market economy”.

“In a sense, while the scaffolding [racially-based discriminatory laws] was removed, the foundation and the house of inequality remains even stronger than it did prior to 1994. Traditional white capitalists, global capital, a layer of the black middle class and a few black capitalists are, today, the beneficiaries, at the expense of the vast majority,” Vally said.

This persisting inequality manifests itself in a myriad of ways, most starkly in the issue of land rights and redistribution. As in the case of Palestinians, South Africans perceive land as having much deeper value than its market price; it is closely tied to identity and cultural roots.

Mahlatse Mpya, a researcher at the Afro-Middle East Centre, told me that the South African government is still unable to “comprehend what land meant to black people”. For black South Africans, “land is part of their identity, heritage, a way for many of them to connect with their roots and ancestors”, she explained.

Black South Africans expected the land to be returned to them in the post-apartheid era, but for years the African National Congress (ANC) remained reluctant to confiscate any land from whites for years. Fearing such a move would cause the country to lose foreign investment and support, the government instead sought to procure land by buying it from whites.

Recently the ANC adopted a resolution to push forward legislation to expropriate land without compensation. While some have celebrated the move, others are wary.

“The land continues to be a contentious issue and will not be resolved by a government that prioritises foreign investment over the will of the people,” Mpya said.

Then, there is the issue of violence. The South African experience has demonstrated that the official demise of apartheid does not necessarily mean the end of state repression and coercion. While violence by the South African security apparatus is rationalised differently than in apartheid times, the traumatising impact it has is essentially the same.

Tokelo Nhlapo, a researcher at South Africa’s Ekurhuleni Municipality for the Economic Freedom Fighters (EFF), told me that the South African government has used repression to maintain the same matrix of control that was utilised by the country’s colonial rulers. It has been able to do so partly because South African transitional justice failed to address and resolve many of the effects of apartheid violence on the general population.

“The establishment of the judicial process of the Truth and Reconciliation Commission (TRC) promised to heal South Africa and bring about reconciliation to a once deeply divided country,” he said. “While the TRC was generally welcomed by the international community as a peaceful means of overcoming a violent past, in reality, the judicialisation of South Africa’s history of conflict individualised state-sponsored violence aimed at entire communities, obscuring the link between perpetrators and beneficiaries.”

He further explained: “By ‘judicialisation’, I refer to the over-reliance on legal means [to address] the core moral predicament of apartheid violence, denying the black majority the franchise of citizenship, limiting its movement through pass laws, forced removals from its lands, limited access to education and work opportunities – none of which the TRC interrogated.”

As a result of the lack of true reconciliation and serious effort by the ANC to address apartheid brutality in all its manifestations and structures, violence also spread within formerly oppressed communities.

“A combination of factors, such as mass detention, arrests and exile of experienced and mature socio-political leaders, lack of skills, sectarianism, factionalism, and infiltration by agents of the [post-1994] regime, settling of personal scores etc, led to several acts of miscarriage of democracy that reduced the activities of some of the civic associations, street committees, block committees, defence units and people’s courts into mob justice.”

Indeed, as my South African interlocutors repeatedly pointed out during our conversation, the South African experience is fraught with difficulties and setbacks. Many of the country’s intellectuals feel that the post-apartheid trajectory is hardly promising.

Palestinians should therefore pay attention to what is going on in South Africa today, rather than just blindly celebrate and praise its past of anti-apartheid struggle. All these issues – post-apartheid nation-building, economic oppression and endemic violence – need to be closely considered and woven into the Palestinian liberation strategy.

If we are to be successful in demolishing Tel Aviv’s apartheid and building a brighter future in which Palestinian Arabs and Israeli Jews share the land and resources on equal footing, we have to learn from South Africa’s mistakes. 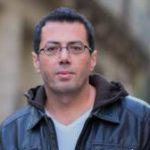