The rights group said the demolitions left 238 Palestinians including 127 minors without a home. 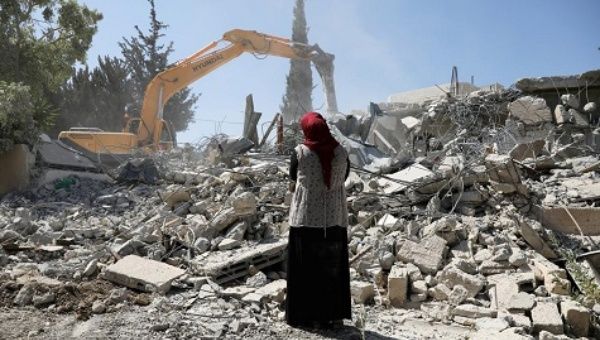 Israel claims demolishing the family homes of alleged militants deters violence, while the Palestinians see it as a form of collective punishment.
| Photo: Reuters (posted here from teleSUR)

25 Oct 2019 – The rights group added the demolitions left 238 Palestinians including 127 minors without a home.

However, the figures are certainly higher than what presented by B’Tselem as the rights group only takes into account homes destroyed because they were built “illegally,” and do not extend to those demolished for punitive reasons following attacks that kill or wound Israelis.

Israel claims demolishing the family homes of alleged militants deters violence, while the Palestinians see it as a form of collective punishment.

Destruction of Palestinian homes comes amid a high increase in Israeli settlement activity in east Jerusalem as well as in the occupied West Bank, especially since United States President Donald Trump was elected.

Israel occupied east Jerusalem, the West Bank, and the Gaza Strip in the 1967 war. These lands constitute the territories that much of the world recognizes as belonging to a future Palestinian state. After annexing east Jerusalem that year in a move not recognized internationally, Israel today considers the entire city is its capital.

Trump officially recognized Jerusalem as the capital of Israel in 2017 and ordered for the relocation of the U.S. Embassy from Tel Aviv to the disputed city.

More than 620,000 Israeli citizens currently reside in settlements and the issue is are the most important factor in shaping life in the West Bank, according to B’Tselem.

“Their [the settlements] destructive impact on the human rights of Palestinians extends far beyond the hundreds of thousands of dunams [1 dunam = 1,000 sq. meters], including farmland and grazing areas, that Israel appropriated from Palestinians in order to build them,” the group states adding that “more land has been expropriated to pave hundreds of kilometers of roads for settler use only; roadblocks, checkpoints, and other measures that limit Palestinian movement only have been erected based on the location of settlements.”