Those Fancy Tea Bags? Microplastics in Them Are Macro Offenders 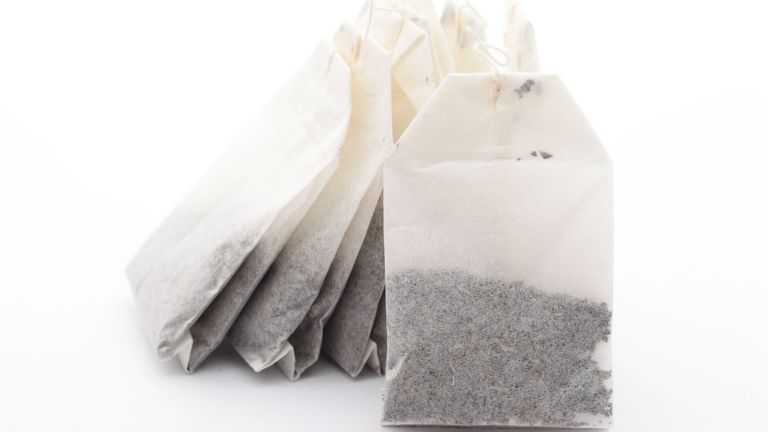 Nylon tea bags are not as innocent as they seem.
Sky News

So reads a 2006 New York Times article on the rise of nylon mesh tea bags, an innovation that diversified the tea market and offered a new, fancier echelon of tea bag. “Instead of paper,” the writer explains, “the leaves will be enveloped by nylon mesh bags in a delicate pyramid shape,” allowing for a larger brewing area and tastier drink, all without the “chore of cleaning up the soggy remains”.

Good news, we thought. The innocent tea bag gets an upgrade, while remaining harmless. Not so much. These tea bags actually flood every cup with magnitudes of microplastics – according to a new study released by researchers at McGill University in Montreal last week.

Nathalie Tufenkji, a professor of chemical engineering, began studying nylon mesh tea bags after one was served to her at a local café.

Tufenkji and her team discovered that steeping a single silky plastic tea bag at brewing temperature (95 °C) releases approximately 11.6bn microplastics and 3.1bn nanoplastics (the latter are 150 times smaller than a hair, possibly small enough to permeate human cells) made up of nylon and polyethylene terephthalate (PET) into a single cup of tea.

When the researchers in the McGill study experimented with feeding the plastics to microscopic, shrimp-like creatures called water fleas, the fleas wigged the heck out.

The water fleas swam “crazily”, Tufenkji told the CBC. Exposure to the plastics “really stresses them out”. The fleas’ exoskeletons became unnaturally “ballooned,” a worrisome effect which the researchers believe warrants further study.

To put it unscientifically, the amount of plastic found in these tea bags is more than we ingest from just about anything else. For context, a liter of water in a single-use plastic bottle contains 44 microplastic particles; a portion of mussels contains about 90; a kilogram of salt over 600. One study found we consume 70,000 particles annually just from the ambient dust that settles on our food.

This year, the World Wide Fund for Nature estimated that the average person ingests about five grams of plastic a week – the equivalent size of a credit card. Based on that research, over the course of a year we munch through over 260 grams of plastic, which, if you need a visual, looks like this bag of candy.

Yet studies like McGill’s suggest such assessments are likely conservative and we are all consuming much more plastic than we realize. After all, currently only a sliver of common foods, like sugar, shellfish, and beer – representative of just of 15% of the calories consumed by the average person – have been analyzed for the presence of microplastics.

This all sounds pretty bad – are we destined to incrementally ingest plastic until we become a pile of bones and bottle caps, like those haunting images of dead sea birds? It would be good to know, but the effect of micro- and nanoplastics on human health is relatively unstudied and not currently considered major.

“I don’t find it particularly comforting that there’s no hard research that plastics have negative health effects on humans,” says Lindsay Miles, a Perth-based author and blogger who has espoused plastic-free living since 2012. Like DDT, asbestos, and cigarettes, “Everything’s safe until someone goes, ‘Oh no! It’s not safe anymore!’” she says.

“I’ve been banging on about plastic in tea bags for years,” adds Miles, who in 2014 wrote about a kind of plastic called polypropylene being used in many conventional paper tea bags – which she, like many, long incorrectly assumed were biodegradable.

“[When I contacted] some of the tea companies, they were saying, ‘people don’t really care’ [about plastics in tea bags] and I’m like, ‘no, people do care, they just don’t know,’” Miles says. Similarly, she believes the marketing of nylon tea bags as “silken” or “silky” may confuse consumers; a few upscale brands do package their teas in real, biodegradable silk or cotton, but many more use nylon.

“People may think they’re made of silk, but they’re not,” says Miles.

Michael Harney of Millerton, New York-based tea company Harney & Sons says his company has been using nylon tea sachets for over 20 years, but over the last six months has been investigating a fully biodegradable alternative.

“[We also] offer loose leaf tea, which is a good option,” Harney notes.

Indeed the wisest way to make a cup of tea free from either traces of polypropylene or a wallop of invisible plastic specks is to brew it old school – by steeping loose leaves in a reusable strainer. You’ll have to clean out the “soggy remains,” yes, but some inconveniences are worthwhile.