Tulsi Nails It on National TV… US Regime-Change Wars 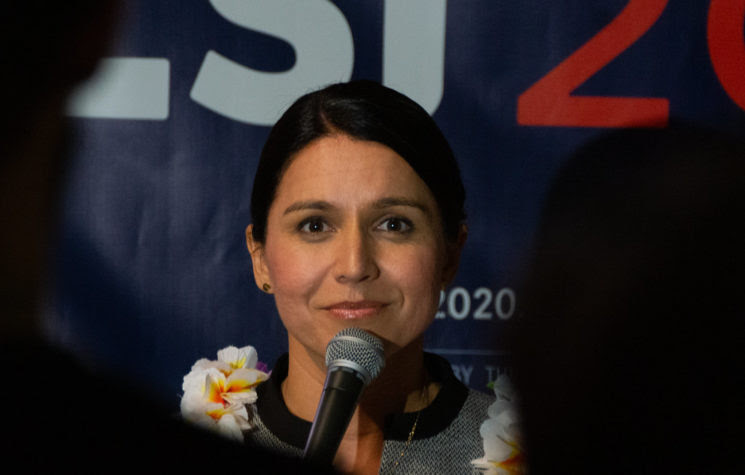 18 Oct 2019 – No wonder Democratic Party bosses and mainstream media are trying to bury presidential contender Tulsi Gabbard. She is the only candidate, perhaps the only politician in the US, who is telling the American public exactly what they need to know about what their government and military are really up to: fighting illegal regime-change wars, and to boot, sponsoring terrorists for that purpose.

It didn’t come much clearer nor more explicit than when Gabbard fired up the Democratic TV debate this week. It was billed as the biggest televised presidential debate ever, and the Hawaii Representative told some prime-time home-truths to the nation:

“Donald Trump has blood of the Kurds on his hands, but so do many of the politicians in our country from both parties who have supported this ongoing regime-change war in Syria that started in 2011… along with many in the mainstream media who have been championing and cheer-leading this regime-change war.”

The 38-year-old military veteran went on to denounce how the US has sponsored Al Qaeda terrorists for its objective of overthrowing the government in Damascus.

It was a remarkably damning assessment of US policy in Syria and elsewhere in the Middle East. And it was by no means the first time that Gabbard has leveled with the American people on the brutality and criminality of Washington’s so-called “interventions”.

The other 11 Democratic candidates on the stage during the TV debate looked agog after Gabbard’s devastating and calmly delivered statement. All the others have proffered the false narrative that US forces are in Syria to “fight terrorism”. They deplore Trump’s announcement last week to pull back US troops from northeast Syria because, they say, it will undermine the fight against Islamic State (IS or ISIS) and other Al Qaeda affiliates. They also condemn Trump for “betraying Kurdish allies” by his partial troop withdrawal.

President Donald Trump talks about “ending endless wars” and “bringing our troops home”. But he still premises his views on a credulous belief that the US under his watch “defeated ISIS 100 per cent”. In that way, he essentially shares the same corny view as the Democrats and media that America is a force for good, that it is the “good guys wearing white hats riding into the sunset”. 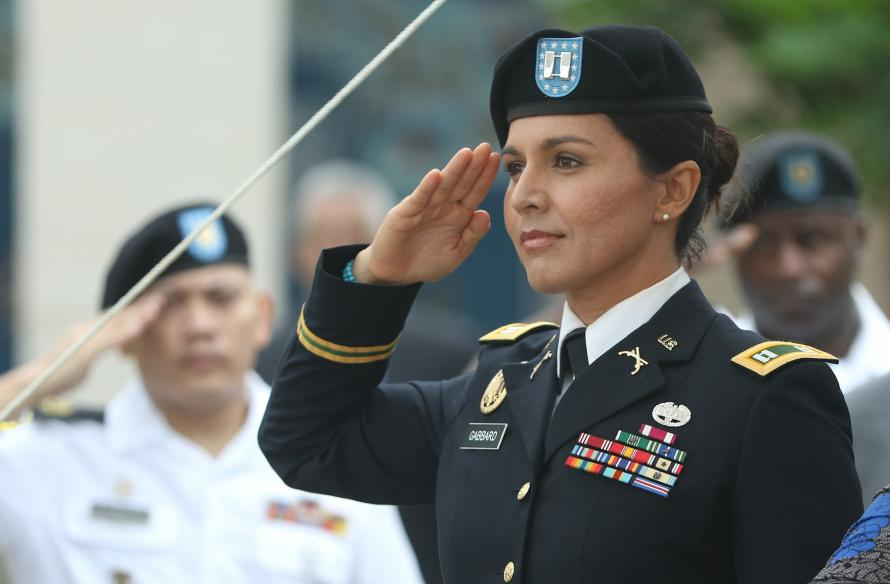 On the other hand, Gabbard stands alone in telling the American people the plain and awful truth. US policy is the fundamental problem. Ending its regime-change war in Syria and elsewhere and ending its diabolical collusion with terror groups is the way to bring peace to the Middle East and to spare ordinary Americans from the economic disaster of spiraling war debts. American citizens need to know the truth about the horror their government, military, media and politicians have inflicted not just on countries in the Middle East, but also from the horrendous boomerang consequences of this criminal policy on the lives and livelihoods of ordinary Americans, including millions of veterans destroyed by injuries, trauma, suicide, and drug abuse.

Following the TV debate this week, it seems that Gabbard won the popular vote with her truth-telling. A major online poll by the Drudge Report found that she stole a march on all the other candidates, winning approval from nearly 40 per cent of voters. Top ticket candidates Elizabeth Warren, Bernie Sanders and Joe Biden were trailing behind with 7 per cent or less.

Gabbard has clearly struck a deep chord with the US public in her honest depiction of American wars.

Despite her shattering exposé and seeming appreciation by the public, most mainstream media tried to bury her after the TV debate. Outlets like Vox and CNN declared that Warren was the winner of the debate, whose talking points were mainly about domestic policy issues. Like the other candidates, Warren plies the propaganda narrative of US forces “fighting terrorism”. Vox even slated Gabbard as “a loser” in the debate and claimed she had made “blatantly false” statements about the US’ role in Syria.

Other mainstream news outlets chose to ignore reporting on Gabbard’s demolishing of the official propaganda about American wars. Earlier this week, CNN and the New York Times smeared her as a “Russian asset” and an “apologist for Assad”, referencing a visit she made to Syria in 2017 when she held talks with President Assad.

The Democratic National Committee is claiming that Gabbard does not have sufficient support in polls it deems worthy for her to qualify for appearing in the next TV debate in November.

International events, however, are proving the Hawaii Representative right. US troops, as with other NATO forces, have been occupying Syrian territory illegally. They have no mandate from the United Nations Security Council. The pullback of US troops by Trump has created a vacuum in northeast Syria into which the Syrian Arab Army is quickly moving to reclaim the territory which US-backed Kurdish fighters had de facto annexed for the past five years. Several reports show the local people are joyfully welcoming the arrival of the Syrian army. The scenes are reminiscent of when Syrian and Russian forces liberated Aleppo and other cities previously besieged by terror groups.

America’s war machine must get out of Syria for the sake of restoring peace to that war-torn country. Not because “they have defeated ISIS 100 per cent”, as Trump would conceitedly claim, nor because “we are betraying Kurds in the fight against terrorism”, as most Democrats and US media preposterously claim.

Peace will come to Syria and the Middle East when Washington finally ends its criminal regime-change wars and its support for terrorist proxies. Tulsi Gabbard seems to be the only politician with the intelligence and integrity to tell Americans the truth.