Shut Down the School of the Americas/WHINSEC

15 Nov 2019 – The School of the Americas/WHINSEC in Fort Benning, Georgia, has become notorious for training and enabling torturers, dictators, and massacres throughout the Western Hemisphere. But the SOA’s crimes aren’t a thing of the past — the school is still training the human rights abusers of today, especially through ICE and the Border Patrol. 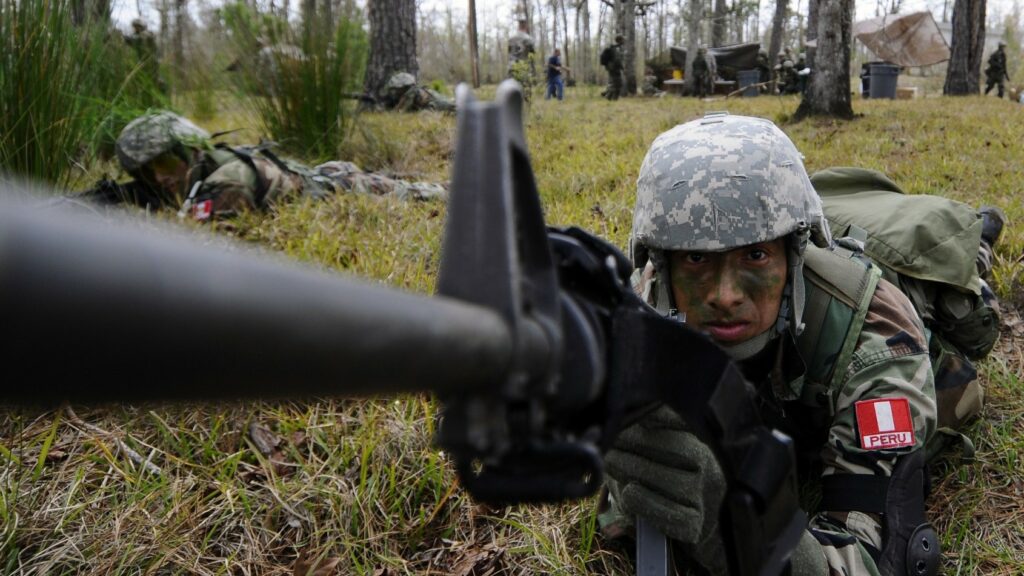 Students from the Western Hemisphere Institute for Security Cooperation (formerly School of the Americas) and students from the Naval Small Craft Instruction and Technical Training School conduct a joint assault on a simulated narcotics camp during a field training exercise. US Navy photo

On November 16, 1989, the US-trained and funded Salvadoran Atlacatl Battalion entered the grounds of El Salvador’s Central American University (UCA) and brutally murdered six Jesuit priests, sixteen-year-old Celina Ramos, and her mother, Elba Ramos. Nineteen of the twenty-five Atlacatl Battalion soldiers were graduates of the US Army School of the Americas (SOA) — a combat training institution with the ostensible aim of instructing Latin American militaries in control tactics over armed counterinsurgent groups.

SOA was founded in the Panama Canal Zone in 1946 and expelled from Panama to Fort Benning near Columbus, Georgia, in 1984. The slain Jesuit priests worked in solidarity with El Salvador’s poor and marginalized and were outspoken critics of the country’s military dictatorship. They are among the 75,000 civilians murdered during the US-backed war in El Salvador between 1980 and 1992.

The SOA has trained more than 83,000 Latin American security forces since its founding. Notorious graduates of the SOA — including nearly a dozen dictators and some of the worst human rights violators in the continent — are guilty of using torture, rape, assassination, forced disappearance, massacres, and forced displacement of communities to wage war against their own people. Former Panamanian president Jorge Illueca stated that the School of the Americas was the “biggest base for destabilization in Latin America.” US-led and supported state violence abroad has ravaged and devastated communities in Central and South America, many of whose people are forced to migrate north.

On September 20, 1996, under intense public scrutiny, the Pentagon released the SOA training manuals, which advocated torture, extortion, blackmail, and the targeting of civilian populations. The release of these manuals proved that US taxpayer money was used to teach Latin American state forces how to torture and repress civilian populations.

A US congressional task force reported that those responsible for the 1989 UCA massacre in El Salvador were trained at the US Army School of the Americas, and as public pressure mounted to close the SOA, the Department of Defense responded by replacing the School of the Americas with the Western Hemisphere Institute for Security Cooperation (WHINSEC) in January 2001. The measure passed when the House of Representatives defeated a bipartisan amendment to close the school and conduct a congressional investigation by a narrow ten-vote margin. The opening of WHINSEC is not grounded in any critical assessment of the training, procedures, performance, or consequences of the training program it copies. Further, it ignores congressional concerns and the public outcry over the SOA’s past and present links to human rights atrocities.

In 2015, the first US Border Patrol agent graduated from the infamous training facility. On October 24 of this year, a contract between Border Patrol and Winchester Ammunition became public, confirming that Border Patrol purchased 33 million rounds of bullets and could purchase more than 330 million additional rounds over the next five years. Training of Border Patrol staff at Fort Benning coupled with their increased firepower is setting the stage for US state agents to wage war against undocumented migrants and refugees at border crossings and within the United States.

Over the past fifteen years, nearly one hundred people have been killed by US Border Patrol as a direct result of their excessive use of force, including the cross-border killings of fifteen-year-old Sergio Adrián Hernández Güereca in 2010 and sixteen-year-old José Antonio Elena Rodríguez in 2012. Both teenagers were on Mexican soil when they were shot at and killed by US Border Patrol agents located on US soil. Not a single Border Patrol agent has ever been held legally accountable for these crimes. According to a recent internal government report obtained by Quartz, criminal misconduct by border officers is at a five-year high.

In addition to US Border Patrol agents now being trained at the location notorious for instructing Latin American security forces in civilian-targeted warfare, on September 9 of this year, an unredacted Immigration and Customs Enforcement (ICE) report revealed that ICE agents will also begin training there. The report divulged that ICE contracted New Mexico training systems company Strategic Operations for almost $1 million to build realistic models of US cities at Fort Benning. This will be a training facility meant to simulate raids that ICE teams would carry out in places like Chicago and Arizona, and the ICE Special Response Teams will be trained to deal with immigrants crossing the border.

There are already extremely detailed designs of buildings meant to imitate the kinds of places that ICE teams will raid, such as a two-story brick residential building typical of Chicago and a single-family six-room home typical of Arizona, complete with “set props” such as furniture, clothing, and toys. According to the contract, the plans include expansion for the future, with as many as fifty more buildings to be added to the training facility.

ICE agents have carried out violence against immigrants across the country. In July, video surfaced of ICE officers in Kansas City assaulting a man named Florencio Millan-Vazquez in front of his children and girlfriend; they smashed his car window and dragged him out to arrest him after claiming there was a warrant for his arrest, despite not providing evidence of this. More recently, an immigrant man was shot by ICE agents in Nashville, Tennessee, this past September and had to be hospitalized. ICE remains a human rights threat across the United States.

The United States is directly implicated in training and financing the perpetrators of gross human rights violations. In South and Central America, this violence is marked by military, economic, and political intervention, in addition to training proxy fighters at the SOA/WHINSEC. Now, US Department of Homeland Security agents are being trained at the same location in the same tactics of civilian-targeted warfare. The results are already clear: lethally trained and heavily militarized state security forces that target civilian populations, specifically communities of color, without meaningful oversight or accountability.

On the thirtieth anniversary of the UCA massacre, human rights organizations are continuing to call for the closure of the SOA/WHINSEC training facility at Fort Benning. The school’s crimes aren’t just evident in the atrocities of the past — they’re also still found in the horrors along the US-Mexico border and through the atrocious violence of ICE today. Those who are horrified by the crimes of the Border Patrol and ICE should join the call to shut down the SOA/WHINSEC and similar training centers.

Dévora González is a field organizer with the School of the Americas Watch.

Azadeh Shahshahani is legal and advocacy director for Project South and a past president of the National Lawyers Guild.