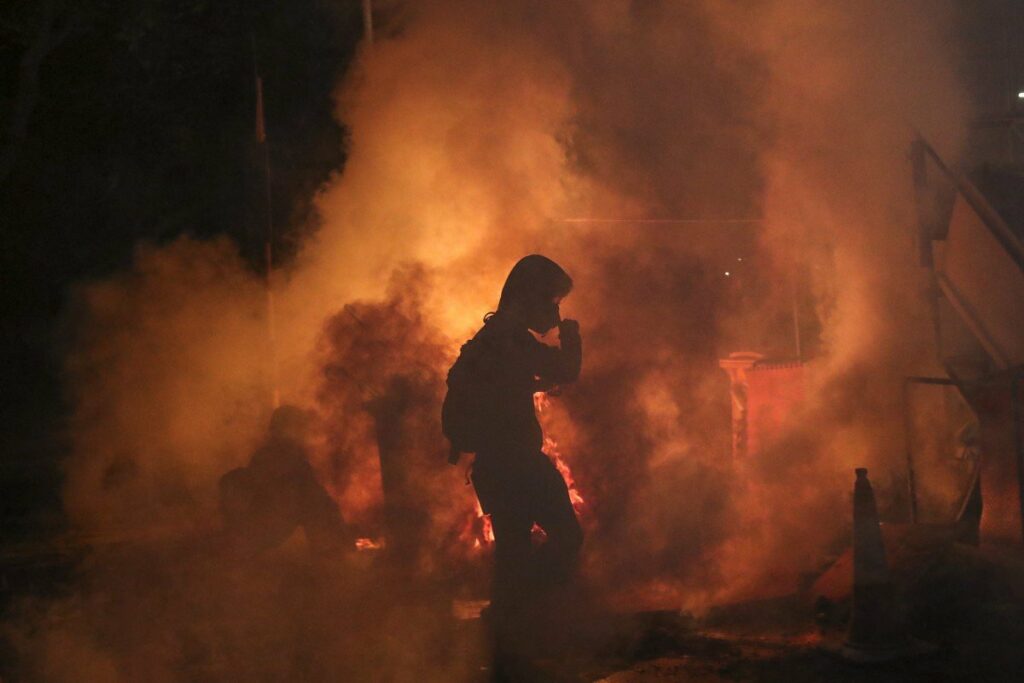 Clashes break out between riot police and students protesting at the Chinese University of Hong Kong in Sha Tin on Tuesday.  Photo: Sam Tsang

13 Nov 2019 – Maya Boehm, an American exchange student at the Chinese University of Hong Kong (CUHK), has her bags packed to fly home at a moment’s notice. On Tuesday, St Edward’s University in Austin, Texas, told the 20-year-old that she and her classmates had been summoned home to “ensure the continued safety and security of our students” after chaotic clashes the previous night between anti-government protesters and police on the CUHK campus.

The religious studies major has not been given an exact timetable for her return, but she expects to be on a plane within days.

“Everything is very unpredictable right now and I just have to take things not only day by day, but hour by hour,” Boehm said. “It breaks my heart to have to leave like this.”

Boehm is just one of many foreign students in Hong Kong at risk as at least six universities become the latest battlegrounds for the unrest which has gripped the city since June. Protests have also broken out at the University of Hong Kong, Baptist University, City University, Polytechnic University and the Hong Kong University of Science and Technology.

After CUHK became the site of some of the most violent clashes yet on Tuesday – with protesters and police trading petrol bombs for hundreds of rounds of tear gas – foreign students are being called home or face the agonising decision of whether to wait out the unrest. CUHK on Wednesday announced it had cancelled the rest of the semester, while most other universities suspended classes until next week or replaced lectures with online modules for the rest of the term. On Wednesday night, protesters built “checkpoints” at CUHK to watch for police, erected barricades and lit fires near Baptist University in Kowloon Tong, and destroyed water pipes near PolyU in Hung Hom. 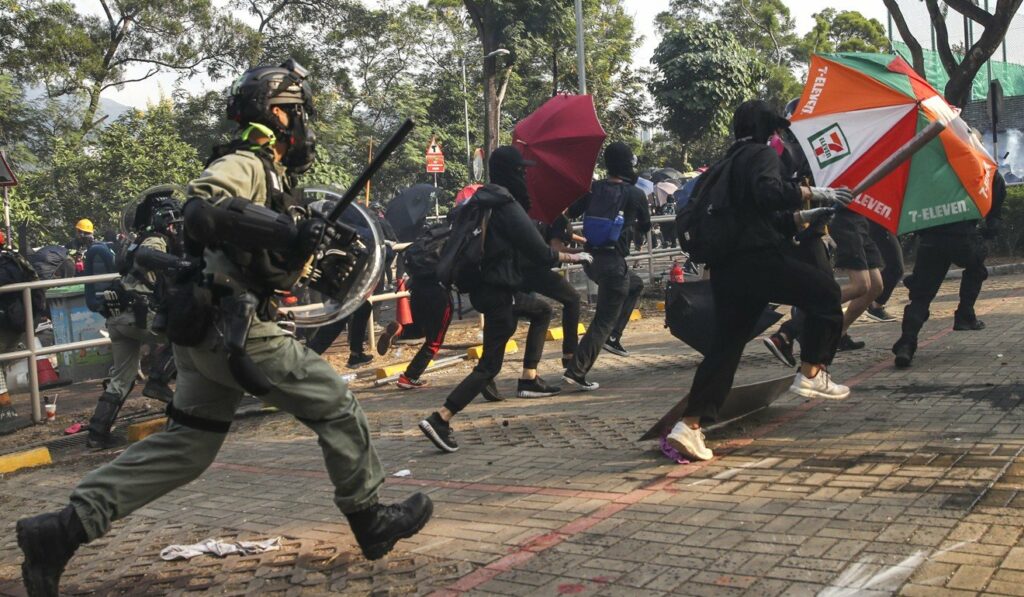 Hundreds of mainland Chinese students have left or are leaving, while Taiwan has coordinated with its carrier China Airlines to evacuate 81 of its students studying at CUHK.

“Deciding to leave or stay is all that exchange and international students are talking about,” said Boehm. “Some students still want to salvage their experience and think that waiting it out will allow them to continue to go out and have fun, and that by going home early, they could miss out.”

Lily Wang, a master’s student in communications at Hong Kong Baptist University, said she left with three friends this morning for the mainland.

“We took a taxi together to the high-speed train station and then went to Shenzhen. We couldn’t wait anymore as relatives back on the mainland were very concerned about our safety,” she said.

“I never imagined that one day my personal safety could not be guaranteed in Hong Kong, a city that was once so safe.”

Hong Kong marine police deployed a ship to help students from the mainland leave the CUHK campus on Wednesday morning. Multiple American universities including St Edward’s and the University of South Carolina have told their students to return home as well. According to Taiwan’s education ministry, 41 Taiwanese students at CUHK have already made the trip home at their own expense. 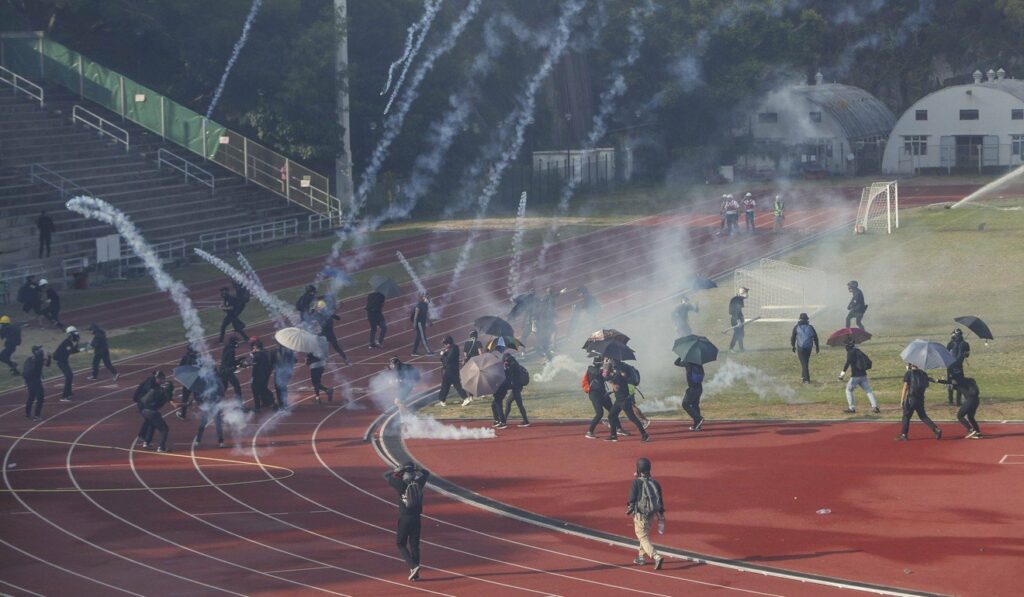 For others, family members are calling on them to return.

Olamide Akintokun, 20, a British exchange student at CUHK, said she was seriously considering returning to the UK due to her parents’ concerns and her frustration with the regular disruption of transport and everyday life.

“It’s honestly more 70-30 with me at the moment,” she said. “Because I am not really enjoying my time here anymore, classes haven’t been on, yet exams and deadlines are round the corner and my parents are worried sick.”

Akintokun, who studies international business management, said the protests had forced her and her friends to take special precautions on campus – such as carrying identification with them in case they were stopped by police – and had created “a feeling of censorship”.

“You can’t say something or dress a certain way around protesters because they might get angry,” she said.

Akintokun said two of her classmates from the UK and Japan had already returned home, while two others from Canada were making preparations to leave this week, due to concerns over personal safety or further interruption to their studies. 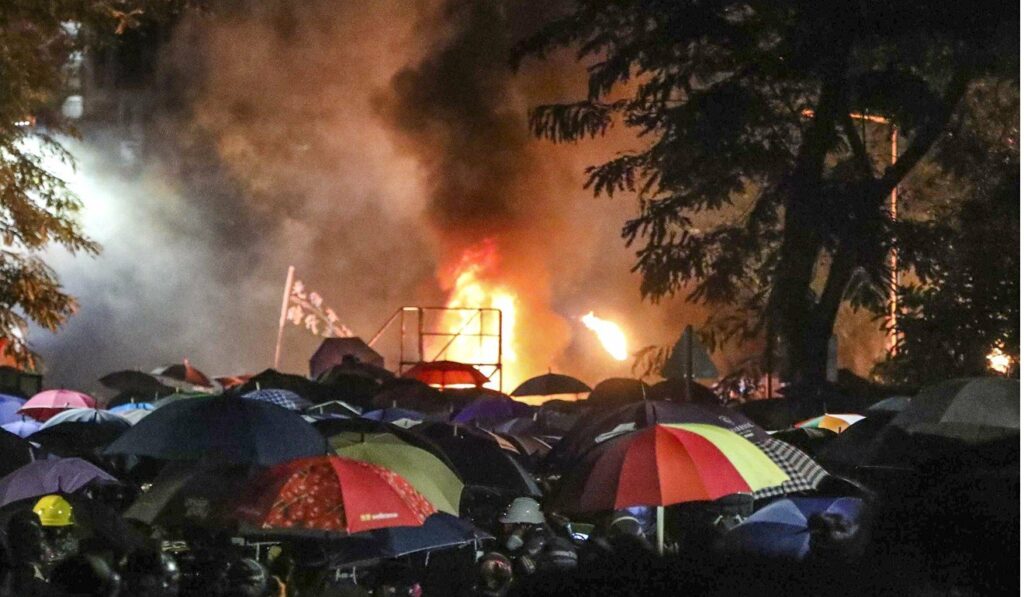 CUHK became the site of some of the most violent clashes yet on Tuesday.
Photo: Felix Wong

Swedish exchange student Nisse Dahlgren, who is studying political science at CUHK, said three of his American friends had gone home in recent days because their families had expressed concerns or their insurance provider threatened to cancel their coverage.

“As for me, I have no intention of leaving at this time, but I am starting to grow weary, of course,” said Dahlgren, 26. “I have not yet received any recommendation or inquiry from either my home university or the Swedish consulate.”

At Hong Kong University of Science and Technology (HKUST), last week’s planned graduation ceremony was cancelled in the wake of the death of 22-year-old computer science student Chow Tsz-lok, who died after falling in a car park near where tear gas was fired.

“That was quite a big shock,” said 23-year-old Jacob Junior Kang, a New Zealander in his final year of study for an operations management degree at HKUST. “It was really tragic to see everyone’s reaction to his death. But it was also sad to see how many international students’ families had flown all the way across the globe just to have the graduation be cancelled.”

More: Protest chaos leads to the most bank branch closings in Hong Kong’s history other than during typhoons

Kang said the official policy of HKUST’s International Student Association was to advise overseas students not to participate in the protests or get involved in any local organisations.

At another international student group for one of the universities in Hong Kong that has faced campus closures due to the protests, leaders who wished not to be named said they were focused primarily on safety and awareness when it came to supporting international students.

Most canteens at that institution are closed, leaving students stuck on campus surviving on instant noodles and other convenience foods.

“As international students, we surely did not expect this situation,” said one of the group’s members. Campus and student halls have tried to provide international students with food, updated information, and organise transportation off campus – either to a safe temporary location or to the airport.

The group leaders said many international students had been advised to contact their respective embassies for safety information.

“No matter what happens in Hong Kong socially, politically or economically, we are going to focus on our students’ safety,” said a leader of the group.

Kang at HKUST said the events had changed international students’ feelings about safety on campus.

“We thought the safest place would be the school,” he said. “We had faith that the schools would protect the students. But from what we have seen at CUHK, there is no guaranteed safety for the international student community.”

Taiwanese media reported that 126 Taiwanese students from CUHK would take a 10pm flight on Wednesday back home with the help of Hong Kong’s Taipei Economic and Cultural Office.

In a Facebook post on Wednesday afternoon, Singapore’s consulate in Hong Kong assured Singaporean students it was “closely monitoring the situation”. Four universities in the Lion City in August pulled the plug on student exchanges with Hong Kong this semester on the advice of Singapore’s education ministry.

Indonesia’s consulate said it was likewise monitoring the situation, and advised students to stay safe, obey the law and contact the consulate on its 24-hour phone line with any problems.

The Norwegian foreign ministry said on its website that “students should continuously evaluate campus safety”. The Technical University of Denmark has urged its 36 students in Hong Kong to pack up and return home.

Eight other consulates did not respond to requests for comment, while the Japanese consulate released a statement warning all nationals to avoid the protests and refrain from filming protesters.

Activist group Australia-Hong Kong Link on Tuesday released a petition calling on Australian universities to denounce the actions of Hong Kong police at CUHK and “reconsider partnerships with Hong Kong universities in the future if students’ safety is at risk”.