Today’s Protests Indicate the Scale of Troubles in Our Paradise 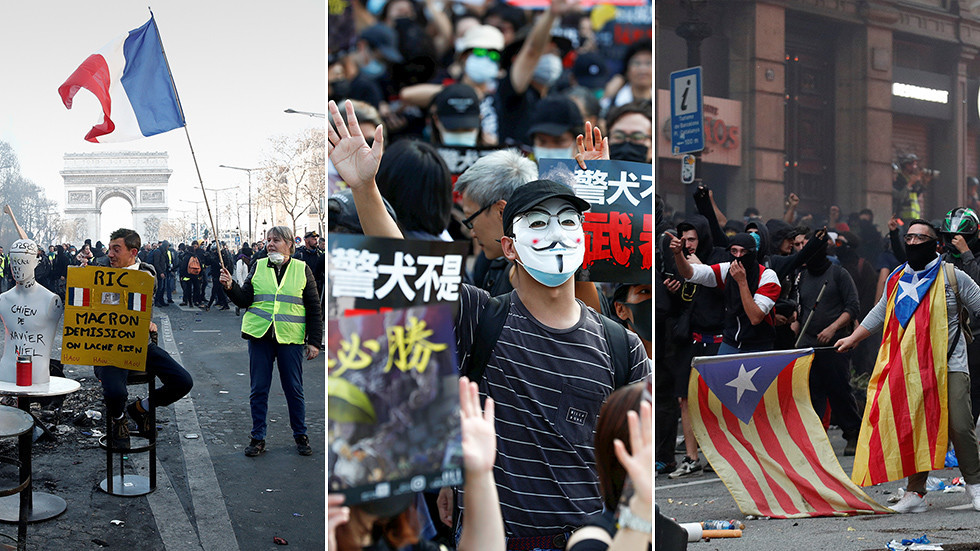 28 Oct 2019 – Anti-establishment protests are popping up all over the world, in countries with different political systems, and various levels of wealth. We may be entering an era of widespread civil unrest.

A couple of weeks ago, Chinese media started promoting the claim that

“demonstrations in Europe and South America are the direct result of Western tolerance of Hong Kong unrest.”

In a commentary published in Beijing News, former Chinese diplomat Wang Zhen wrote“the disastrous impact of a ‘chaotic Hong Kong’ has begun to influence the Western world,” i.e., that demonstrators in Chile and Spain were taking their cues from Hong Kong.

An editorial in Global Times accused Hong Kong demonstrators of “exporting revolution to the world”.

“The West is paying the price for supporting riots in Hong Kong, which has quickly kindled violence in other parts of the world and foreboded the political risks that the West can’t manage,” it warned.

“There are many problems in the West and all kinds of undercurrents of dissatisfaction. Many of them will eventually manifest in the way the Hong Kong protests did,” the Global Times’ editor Hu Xijin said in a video commentary. “Catalonia is probably just the beginning,” was the ominous conclusion.

Although the idea that demonstrations in Barcelona and Chile have taken cues from Hong Kong is far-fetched, it is all too easy to claim that these outbursts – Hong Kong, Catalonia, Chile, Ecuador, Lebanon, not to mention the Yellow Vests – cannot be reduced to a common denominator. In each of the cases, the protest against a particular law or measure (higher prices for gasoline in France, an extradition-to-China law in Hong Kong, an increase in public transport fares in Chile, long prison terms for pro-independence Catalan politicians in Barcelona, etc.) ignited a general discontent which was obviously already there, lurking and waiting for a contingent trigger to explode. Thus, even when the particular law or measure, which triggered the discontent, was repealed, protests persisted.

Two weird facts cannot but strike the eye here. First, “Communist” China discreetly plays on the solidarity of those in power all over the world against a rebellious populace by warning Western leaders not to underestimate the dissatisfaction in their own countries. It assumes, beneath all ideological and geo-political tensions, they all share the same basic interest in holding onto power.

Secondly, the “trouble in paradise” aspect: protests are not only taking place in poor, and desolate, countries but in nations of (relative, at least) prosperity. States which were, until now, presented as success stories. At least financially.

Although these protests betray the growing inequalities which belie official success stories, they cannot be reduced to economic issues. The dissatisfaction they express indicates the growing (normative) expectations of how our societies should function, expectations which also concern factors not directly related to the economy, such as collective or individual freedoms, dignity, even meaningful life. Something that was, until recently, accepted as normal (a certain degree of poverty, full state sovereignty, etc.) is now perceived as a wrong to be combatted.

This is why, when evaluating these protests, we should consider also the new explosion of ecological movements and the feminist struggle. Meaning the real one, which involves thousands of ordinary women, not its sanitized American “MeToo” version.

Let’s just focus on one case. In Mexico, massive feminist mobilization involves “the conversation about life, dignified life and rage.”

Allow me to quote Alejandra Santillana Ortiz, a member of Ruda Colectiva Feminista,

“What does life mean for us? What are we referring to when we speak of putting life at the center? For us, life is not a declarative abstract,” she believes. “It necessarily involves talking about dignity and everything that makes it possible to enable dignity.”

So, we are not debating here abstract philosophical speculations on the meaning of life, but reflections rooted in concrete experiences which prove how the most ordinary daily life – things like taking a subway – are impregnated by dangers of brutal violence and humiliation.

“How can a person have peace of mind knowing that on the metro in Mexico City, an integral part of the commute in the city, thousands of women have been kidnapped in a matter of months and that this all took place in public and in broad daylight? And if you aren’t kidnapped, you must consider the very high probability that you will be assaulted, or that you will encounter violent aggression of some kind,” Santillana Ortiz observes. “This is the reason why there are there separate women-only cars on trains, but even then there are men who get on these cars.”

Mexico may be an extreme case here, but it is just an extrapolation of tendencies found everywhere. We live in societies in which brutal male violence boils just beneath the surface, and one thing is clear: Political Correctness is not the way to beat it.

What also makes Mexico an obvious example is a secret solidarity between this persisting male brutality and the state apparatuses that we expect to protect us from it.

“There is a kind of formation of a violent society without punishment in which the state is part of that violence. A great many of the crimes that have been committed in recent years in Mexico have the state and its functionaries or the police directly involved,” Santillana Ortiz continues. “Or, through judges or those in the justice system, the state guarantees generalized impunity in this country.”

The terrifying vision of “generalized impunity” is the truth of the new wave of populism, and only vast popular mobilization is strong enough to confront this obscene complicity of state and civil society.

This is why the ongoing protests express a growing dissatisfaction that cannot be channeled into established modes of political representation.

However, we should avoid, at any cost, celebrating these protests for their distance towards established politics. Here, a difficult “Leninist” task lies ahead: how to organize the growing dissatisfaction in all its forms, including the ecological and feminist elements, into a large-scale coordinated movement? If we fail in this, what awaits us is a society with a permanent state of exception and civil unrest.