Robert Rotberg - The Globe and Mail 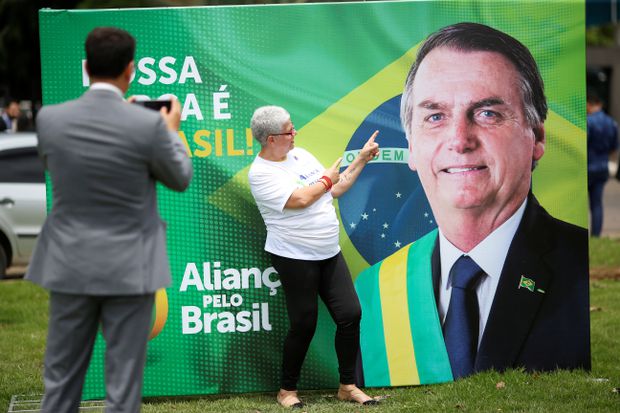 A supporter of Brazil’s President Jair Bolsonaro has a photo taken in front a poster with his image, after he launched a new political party, the Alliance for Brazil (APB) in Brasilia, Brazil November 21, 2019. UESLEI MARCELINO/Reuters

25 Nov 2019 – With the Amazon burning and politicians regaining impunity after political and economic corruption scandals recede, Brazil’s rule of law is suffering one sharp blow after another. Although President Jair Bolsonaro campaigned as an anti-corruptionist, and as someone who would crack down hard on crime more generally, South America’s biggest country is sliding rapidly into a slough of deceit. Modern day brigands are pillaging Brazil’s environment while reforms to its justice system are being denied.

Mr. Bolsonaro rejects environmental claims on the Amazon rainforest. With support from large scale cattle grazers and soybean farmers who want to permanently mutilate the globe’s largest land-based sink of carbon dioxide and its most valuable oxygen producer so that they can acquire fresh and cheap land, Mr. Bolsonaro’s administration has dialed back regulations against setting fire to the Amazon’s forests. It has reduced ranger staff and surveillance; enforcement efforts of existing laws against illegal logging, mining and clearing are down 20 per cent from last year.

So far, according to Brazil’s own National Institute for Space Research, almost 3,800 square miles of Amazon’s forest cover have been set alight since Mr. Bolsonaro became president in 2018. More than 41,000 fires have been burning across the vast Amazon rainforest (approximately 2.2 million square miles in size). These fires are even set on lands within the Amazon that are officially off-limits, being the equivalent of state forests or parks. Indigenous rights are trampled in the process and several of Brazil’s prominent Native peoples have been pushed aside or bullied by corporate invasions and the despoliation of the rainforest. The attack on the Amazon, explicitly condoned, even encouraged, by Mr. Bolsonaro, flies in the face of previous Brazilian international promises by Mr. Bolsonaro’s presidential predecessors and even, in a weak moment earlier this year, by himself.

Mr. Bolsonaro now says the economic value of opening up the Amazon is what’s important. Ecological reserves “hinder development,” he claims, and national parks are a nuisance. Mr. Bolsonaro calls his opponents and environmentalists worldwide (including Chancellor Angela Merkel of Germany) “vegans” whose concerns about deforestation should be ignored. French President Emmanuel Macron has called Mr. Bolsonaro a liar for denying what Brazilians are doing to destroy the Amazonian rainforest.

One of Mr. Bolsonaro’s most popular predecessors, left-leaning former president Luiz Inacio Lula da Silva (in office 2003-2010) accepted Brazil’s environmental responsibilities for the Amazon and eventually curtailed what had been a relentless drive to exploit its forests and cleared spaces for profit. president Dilma Rousseff (2011-2016) continued his policies. So did president Michel Temer (2016-2018), despite being otherwise implicated in vast schemes of corruption, including the infamous Lava Jato corruption imbroglio of 2014-2018.

Lava Jato also embroiled Mr. da Silva, and he was sentenced first to nine years in prison and then (after an appeal) to 12 years for taking bribes from the Odebrecht construction company. Presiding over Mr. da Silva’s trial was Sergio Moro, then the equivalent of a first level trial judge in the North American federal systems. Mr. Moro is now minister of justice in Bolsonaro’s cabinet; he has been having little success in passing reforms to Brazil’s criminal justice system or in persuading the country’s Congress to enact the kinds of changes to the trial system that would keep miscreants such as Mr. da Silva (and the many other politicians tainted by their participation in the Lava Jato kickback scheme) in jail for long periods as a deterrent to rampant corruption.

Indeed, earlier this month, Brazil’s Supreme Court decided that Mr. da Silva could be released from imprisonment while he (and others in similar circumstances) exhausted new appeals in his criminal case. This is the old pattern that Mr. Moro has been trying to break. Appeals of sentences meted out to politicians have for decades been dragged out interminably in Brazil; impunity or something very akin to that welcome disposition has long been the favoured result of wrongdoing by well-connected politicians. Mr. da Silva’s release will set back attempts in Brazil to reverse corruption among the political class.

Likewise, because of the breach of environmental law and regulations in the Amazon, so will the unhindered destruction there give impunity to the corporate interests that are promoting deforestation. Mr. Bolsonaro connives in that form of corruption as well, with much of the resulting profits from the clearing of the Amazon constituting abuse of public office for private gain.

Some environmental organizations have threatened to boycott Brazilian products, especially beef and soy exports. But, however that movement develops, readers should be aware of how much Brazil is unnecessarily, wantonly, contributing to the warming of the planet.

Related: Invasions of indigenous land in Brazil increase under Bolsonaro

Robert Rotberg is the founding director of the Harvard Kennedy School’s Program on Intrastate Conflict, a former senior fellow at CIGI and president emeritus of the World Peace Foundation.