Inequality and Its Many Discontents 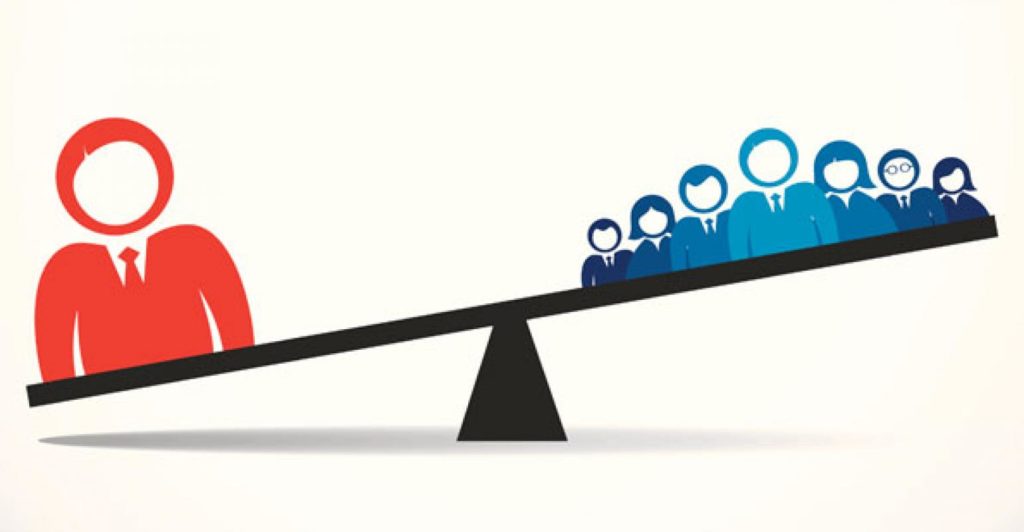 3 Dec 2019 – Much recent unrest, such as the ‘yellow-vest’ protests in France and the US ‘Abolish the Super-Rich’ campaign, is not against inequality per se, but reflects perceptions of changing inequalities. Most citizens resent inequalities when it is not only unacceptably high, but also rising.

Even in the most egalitarian society, not everyone has the same income or wealth. Some inequality is widely considered inevitable, or even desirable to incentivize effort. But even excessive inequality is widely seen as fundamentally unfair. Even President Obama described “dangerous and growing inequality” as “the defining challenge of our time”.

Take the case of two people in a country in 1980, one with an income of $1 daily and the other $10. Let us say that the first person’s daily income is now $10, while the second person gets $100. Even though both incomes have increased by the same percentage, and ‘relative’ inequality between them has remained the same, ‘absolute’ inequality has gone up from $9 to $90.

Deidre McCloskey claims ‘the Great Enrichment’ over the last two centuries has seen per capita incomes rise ten-fold, benefiting most, if not all. In response, Jason Hickel has exposed the Great Enrichment’s slavery, colonization and violent displacement of indigenous peoples.

A study found that “today’s global income inequality levels are much higher than they were in 1820, irrespective if measured in absolute or in relative terms.”

The World Inequality Report 2018 revealed that the world’s richest 1% obtained 27% of global income between 1980 and 2016. By contrast, the bottom half got only 12%. Today, more than half of humanity still lives on US$7.40 a day or less, barely adequate for a decent life.

Oxfam’s Reward Work, Not Wealth reported that 82% of the wealth created in 2016 went to the world’s richest 1%, while the 3.7 billion people in the poorer half of humanity got next to nothing. Oxfam notes elsewhere that now, “seven out of 10 people live in countries in which the gap between rich and poor is greater than it was 30 years ago”.

The recent period has seen the biggest increase of billionaires in history, with a new one every two days, while billionaire wealth increased by US$762 billion in the year to March 2017, an increase which could end global extreme poverty seven times over if well spent.

However, the experiences of East Asian economies during their early phase of industrialization challenged Kuznets’ hypothesis. These economies grew quickly from the 1960s to the 1980s, without inequality rising. More recently, progressive redistribution lowered inequality and accelerated growth during the 2003-2011 Latin American economic boom.

Kuznets’ hypothesis also implied that rising inequality is desirable because the rich save more of their additional income than the poor. Hence, income distribution favouring the rich should lead to more savings and investments, propelling growth.

But land reforms in China, Japan, South Korea and Taiwan reduced inequality, enabling growth to take off. Meanwhile, over the centuries, high inequality in much of Latin America and the Caribbean – associated with colonialism, slavery and land ownership – has undermined growth.

Advocates decry “the perception that billionaires make money for themselves at the expense of the wider population”, attributing their fortunes to successful investments, while highlighting their philanthropy and patronage of the arts, culture and sports.

Rutger Bregman – who chided billionaires at the 2019 Davos World Economic Forum (WEF) for avoiding tax – has argued that societies should not rely on the generosity of the rich. “Philanthropy is not a substitute for democracy or proper taxation or a good welfare state.”

Some of history’s greatest thinkers – e.g., Plato and Aristotle – and classical economists – such as Adam Smith and Karl Marx – have emphasized the adverse effects of inequality on the social fabric. High and rising inequality is not only socially unfair, but negatively impacts political stability, crime and corruption, even undermining democracy.

A recent Oxfam study has shown the many ways Latin American politics has been captured by the super-rich, with substantial financial backing for many new ethno-populist, racist and intolerant religious leaders.

The growing sense of vulnerability of many working people and seeming irrelevance of elitist social democrats have contributed to rising jingoist ethno-populisms in the rich West and elsewhere, blaming foreigners and other ‘outsiders’ for their problems.