Central Asia, Between China and Europe, Is Bustling 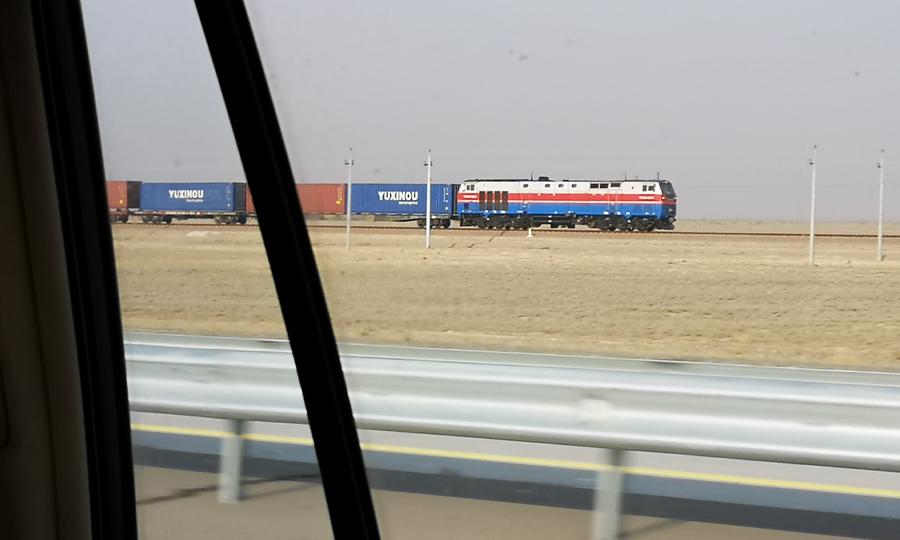 4 Dec 2019 – We are cruising on a pristine, 380 km-long four-lane superhighway from Almaty to Khorgos – finished in 2016 for $1.25 billion, 85% of the cost covered by a World Bank loan. And then, suddenly, riding parallel to us, there’s the real superstar of New Silk Road connectivity.

Meet Yuxinou, the container cargo train plying back and forth along the 11,000 km-long railway corridor connecting Chongqin in Sichuan province via Xinjiang and Kazakhstan to Russia, Belarus, Poland and finally Duisburg in the Ruhr valley. And all that in a mere 13 days.

Along the way, the Yuxinou stops in, among other places, Almaty, Bishkek, Tashkent, Tehran, Istanbul, Moscow and Rotterdam: a who’s who of Eurasian cities. It carries  laptops, BMWs, spare parts, clothes, machinery, international post packages, chemical products, medicine and medical instruments – all manner of goods, made in China and made in Europe. And all that for only 20% of air freight cost.

This operation platform is called Yuxinou (Chongqing) Logistics Co., Ltd., a joint venture among the railways of China, Russia, Kazakhstan and Germany and the Chongqin municipal government, which is quite proud of its “seamless integration of multinational railway logistics” – complete with a fast custom clearance procedure called “single declaration and inspection on entire journey.”

The key Yuxinou crossroads is the intersection between Alashankou, on the Chinese side of the Kasakh border, and Khorgos, a special economic zone in Kazakhstan. The whole project may be in its infancy. After all, the Belt and Road Initiative is still, according to Beijing’s detailed timetable, in the planning stage.

So Khorgos may still be far from metastasizing into the new Dubai, as the hype claimed a few years ago. But watching Khorgos in action is a fascinating experience, unparalleled in its usefulness for gauging Belt & Road’s potential. As much as the China-Pakistan Economic Corridor, the northern part of which I traveled a year ago, this is one of the jewels in Belt & Road’s crown.

There are actually three places to take care of border-crossing buisness at Khorgos. I arrived, via the superhighway, at the exclusive crossing for container trucks. Then I visited the border crossing used by Kazakhs and Central Asians from everywhere, leading to a collection of duty-free mega shopping malls officially called the International Center for Boundary Cooperation (ICBC). Then there’s the train station in Altynkol, where Yoxinou stops as do the Urumqi-Almaty cargo/passenger trains. The actual SEZ – many buildings still under construction – is in the periphery of Khorgos. 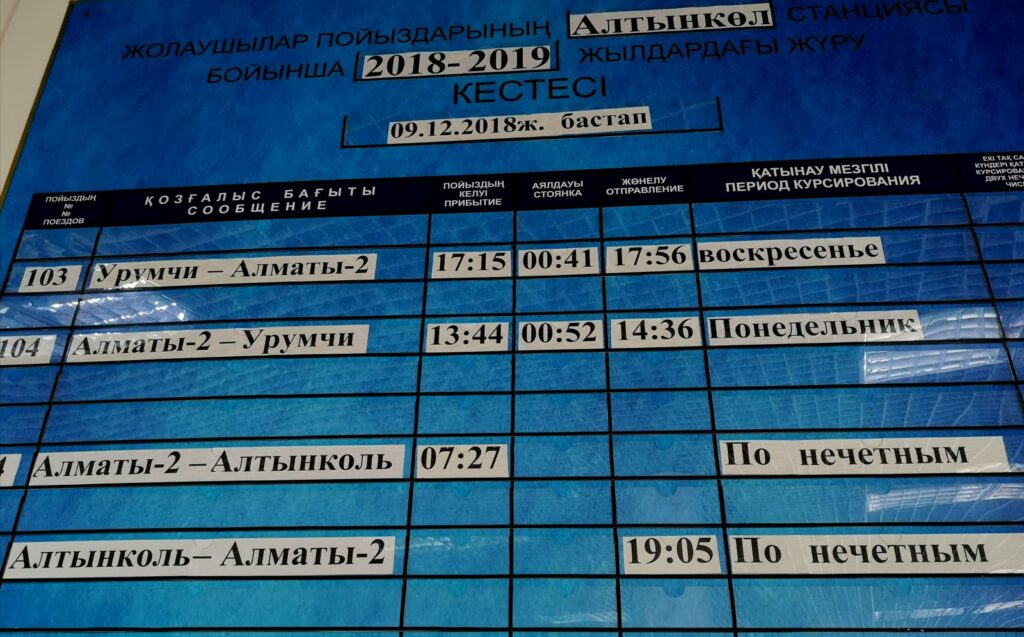 The ICBC – 5.3 square kilometers housing five multi-story shopping malls with over 2,000 shops – is a sort of neutral no man’s land. If you’re Kazakh or Chinese, no visa is needed. But people from all over Central Asia also come – by bus, eager to take advantage of unlimited Made in China bargains. 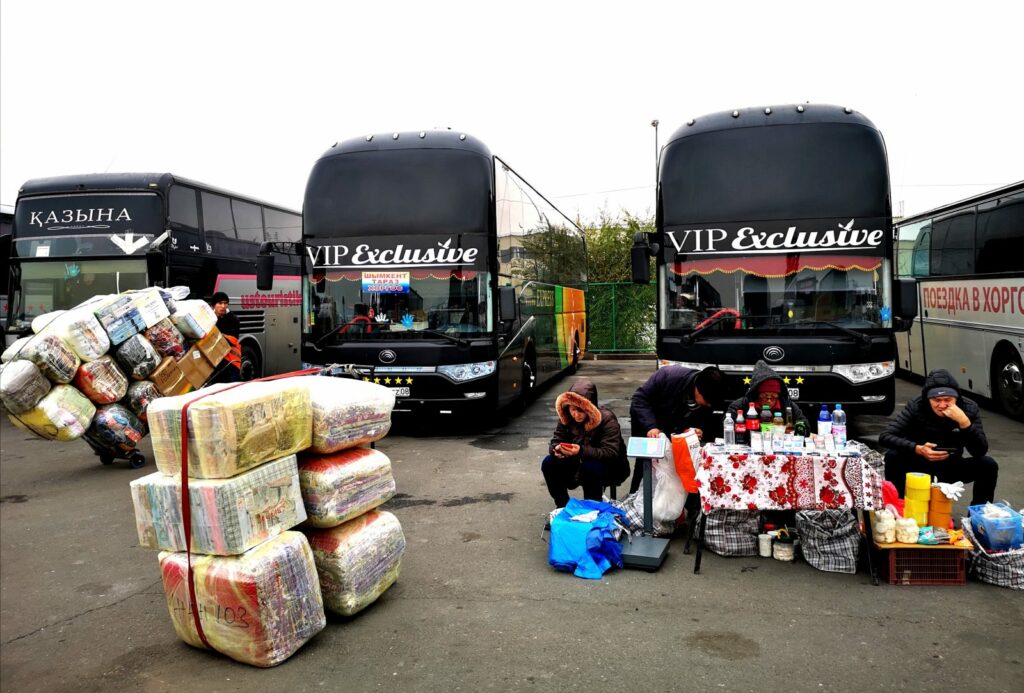 The bus stop at Khorgos, before crossing to the Chinese mega mall.
Photo: Pepe Escobar 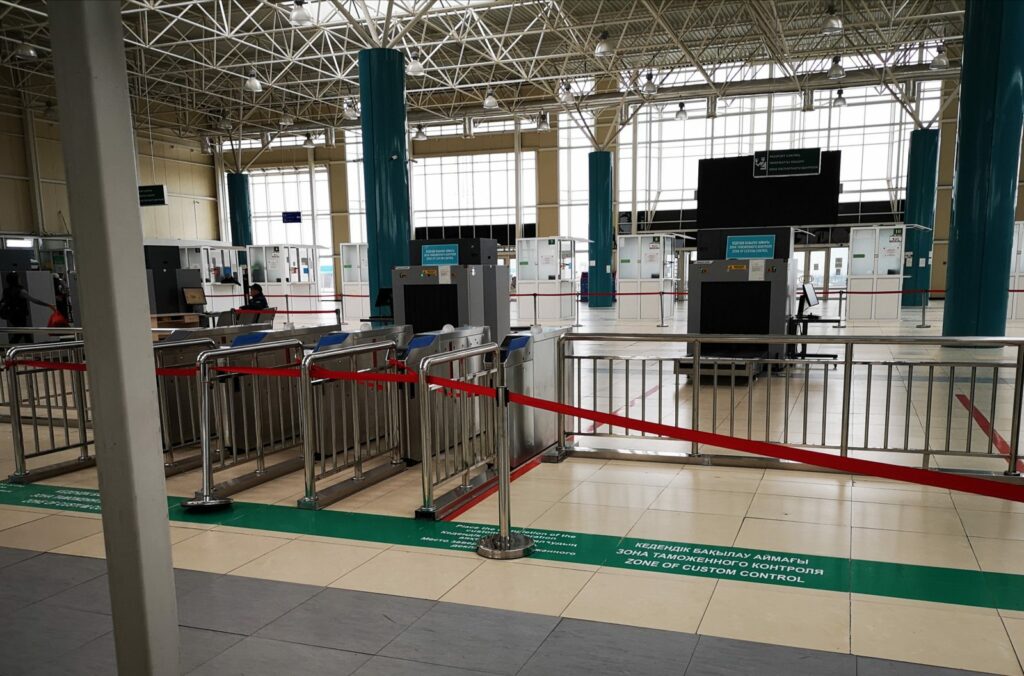 The procedure is quite straightforward. Customers arrive usually in the early morning at a huge bus parking lot. They walk a short distance toward the very modern Kazakh customs building (on the day I visited, because of the bitter cold, it was virtually empty). Then they take a shuttle bus to the Chinese border, cross it with little or no bureaucracy (although the Central Asians, other than Kazakhs, do need visas), and hit the malls. 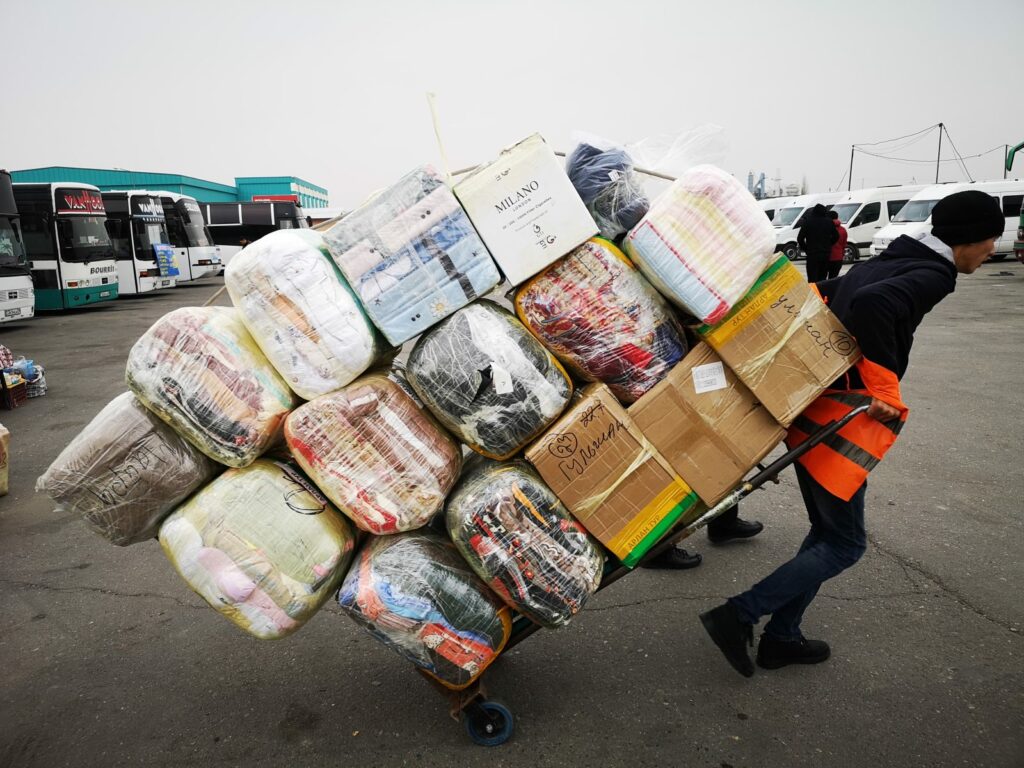 Porter carrying the loot from shoppers at the Chinese megamall.
Photo: Pepe Escobar

They come back at the end of the day fully loaded – excellent business for an army of packagers and porters. Then they board their buses returning to all points Kazakhstan and other “stans”. On busy days, especially in summer, there may be as many as 8,000 shoppers hitting the ICBC.

China’s top connectivity access to Central Asia and West Asia markets, and farther on down the road to Europe, is via Kazakhstan, which counts China as its second-largest trading partner. At the same time, it’s essential to consider that Khorgos is smack on the Xinjiang border, which implies maximum Chinese security alert. 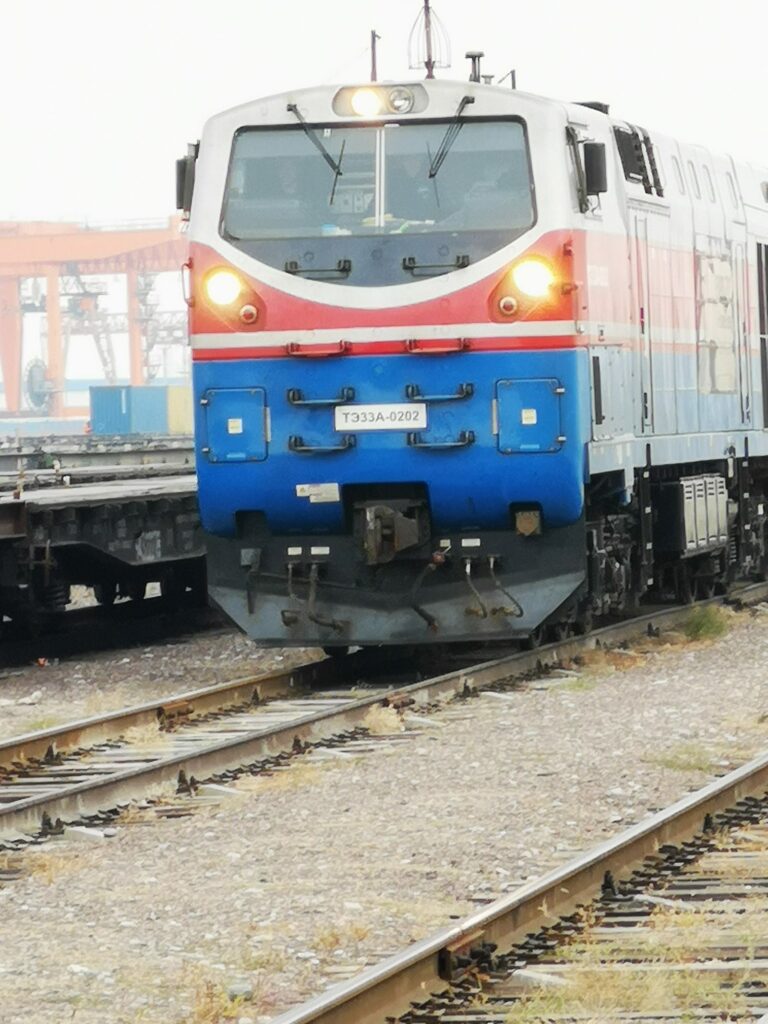 The Yuxinou at Altynkol station, in Khorgos.
Photo: Pepe Escobar

Yet there’s nothing Orwellian about Khorgos. The CCP apparatus in far away Urumqi seems to understand pragmatically that the whole deal is all about a mega-mall, and not conducive to Uighur separatist shenanigans. And on top of it the really heavy business transits via Yuxinou. In the near future, it’s bound to evolve towards high-speed rail.

In terms of road traffic, container trucks conduct a hefty business at Khorgos – certainly more substantial than in other border crossings I visited, in Kyrgyzstan and Tajikistan.

There are two China-Kyrgyzstan border crossings. The more established one, at Torugart, leads straight to the capital Bishkek and then Tashkent in Uzbekistan. The road was repaved with loans from the Export-Import Bank of China and the Asian Development Bank.

The ADB also provided the financing for an alternative route from Bishkek to Osh, along with an $850 million loan from the EXIM Bank. This road is quite something, cutting through Kyrgyz mountains and passes and eliminating at least 220 km of travel in comparison with the ancient road. China Road and Bridge Cooperation was in charge of the construction, including a 3.3 km-long tunnel.

But it’s still a tricky road; on the last mountain pass before the final dash towards Bishkek, my driver Alex and I spent hours negotiating a cornucopia of lorries gone sideways in the snow and a myriad of clueless drivers stuck without tire chains.

The other China-Kyrgyz border crossing is at the Irkeshtam pass, It used to be the main southern branch of the ancient Silk Road, coming straight from Kashgar. The road was resurfaced in 2013, adding to a connectivity integration net linking Kyrgyzstan, Xinjiang and the Karakoram Highway in Pakistan. I crossed a steady convoy of Chinese container trucks coming from Irkeshtam.

There’s only one China-Tajikistan border crossing, at the top of the Kulma pass, 4,363 meters high. The actual Chinese border is 14 km away from the Tajik border, very close to the Karakoram Highway: another instance of close connectivity. This road was opened in 2004 and also follows the ancient Silk Road.

The whole road between the Kulma pass and the Tajik capital Dushanbe, which includes the legendary Pamir Highway (the subject of an upcoming two-part special), is still a (slow) work in progress. It’s funded by a $254 million loan from China’s EXIM Bank with work by China Road and Bridge Cooperation.

Just outside Dushanbe, as I was leaving for the Pamir Highway, I saw a multi-level road intersection built with a loan from the European Bank for Reconstruction and Development and another from the Asia Infrastructure Investment Bank.

What I saw was in fact history in the making; this was the AIIB’s first-ever development loan. There will be many others, as the connectivity between China and its neighboring ‘stans hits overdrive.