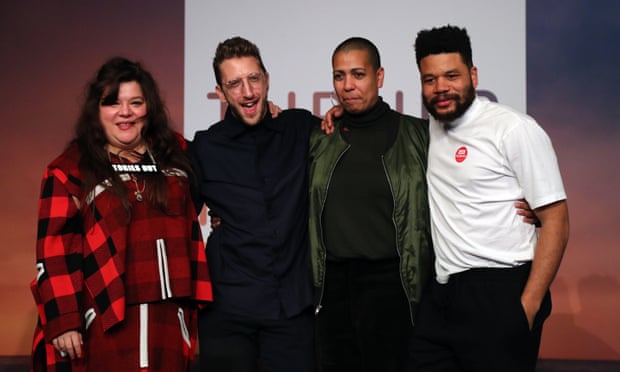 3 Dec 2019 – All four artists shortlisted for the 2019 Turner prize have been named winners after they came together and made a plea for judges to recognise the causes of “commonality, multiplicity and solidarity”.

At a ceremony in Margate on Tuesday evening, Turner prize history was made when Lawrence Abu Hamdan, Helen Cammock, Oscar Murillo and Tai Shani were named the collective winner after they jointly wrote to judges.

Each of the artists, who had never met each other before being shortlisted, will get a quarter share of the £40,000 prize pot.

At the event, Cammock read out a joint statement on stage. In it the artists referred to the significance of the Turner prize – which is for a British artist working in Britain – seeking to “expand what it means to be British”, and said their work sought to take a stand against isolation and exclusion in a hostile environment with a “symbolic gesture of cohesion”.

This year’s Turner prize has been one of the most political in its history with work exploring themes of migration, patriarchy, torture and civil rights. The artists asked judges not to pit those subjects against each other.

Their statement echoed the letter they wrote to the judges beforehand, in which they said that each made art about social and political issues of great importance and urgency. “The politics we deal with differ greatly, and for us it would feel problematic if they were pitted against each other, with the implication that one was more important, significant or more worthy of attention than the others.

“At this time of political crisis in Britain and much of the world, when there is already so much that divides and isolates people and communities, we feel strongly motivated to use the occasion of the prize to make a collective statement in the name of commonality, multiplicity and solidarity – in art as in society.”

The judges unanimously agreed to abide by the request.

“The politics we deal with differ greatly, and for us it would feel problematic if they were pitted against each other.”
— Letter to judges

Alex Farquharson, director of Tate Britain, said the artists had given judges a lot to think about and they were “overwhelmingly excited” by the request. He also conceded it had been the most straightforward prize jury meeting he had ever chaired.

Both the nature of the work and the timing made it the correct decision, he said. “To state the obvious these are very polarised times, in this country and across the world.”

The prize has never been won collectively in its 35-year history and may never again, said Farquharson. “This is the result of a confluence of different issues.

“I don’t think we’ve had a shortlist where all four artists work in a participatory manner and all with deep and pressing political concerns and that it comes at a time that it does.”

He said the Turner prize had a history of surprises and that had kept it relevant.

Afterwards, the four artists said they hatched the plan at their very first meeting together at Turner Contemporary, even forming a WhatsApp group called “the winners” as a joke.

Abu Hamdan said this year was a “specific” event because all the artists were on a similar social and political track. “This time it seemed to be that there was a cohesion around a political approach more than an aesthetic practice,” he said.

“The other reason is that we genuinely didn’t feel like in the nature of the works we make the competition format worked because it would pit prescience over the contribution that we make as artists.”

The jury praised the artists for their commitment to the collective power of art. In a statement judges said: “We are honoured to be supporting this bold statement of solidarity and collaboration in these divided times. Their symbolic act reflects the political and social poetics that we admire and value in their work.”

The Turner prize, one of the world’s best known visual arts awards, annually seems to divide audiences as much as it brings them together. It often delights and aggravates in equal measure and the strongly political nature of this year’s work has done the same again.

The former Guardian art critic Waldemar Januszczak this year wrote: “The use of the Turner as a propaganda vehicle for ultra-Londony evening-class lectures has become seriously off-putting.

“People don’t go to art to be turned into better citizens. They go to art to have their eyes pleasured and their hearts touched.”

Nevertheless about 95,000 people have so far visited this year’s exhibition in Margate, making it one of the most popular Turner prize shows held outside London.

None of the work they saw was meant to be quick or easy. Cammock presented a 99-minute documentary film examining the overlooked role of women in the Northern Irish civil rights struggle. Murillo installed papier-mache worker figures on pews looking out at a gorgeous sea view, obscured by a black curtain.

Abu Hamdan, a self-described audio investigator or “private ear”, made works that stemmed from an investigation he undertook with Amnesty International and Forensic Architecture into the Syrian regime’s torture prison of Saydnaya. Shani created a surreal fantasy installation that represents a city built by women, a post-patriarchal world.

Tate Britain director Alex Farquharson, who chaired the judges, said: “In coming together and presenting themselves as a group, this year’s nominated artists certainly gave the jury a lot to think about.

“But it is very much in the spirit of these artists’ work to challenge convention, to resist polarised world views, and to champion other voices. The jury all felt that this made the collective a worthy winner of the Turner prize.”

The collective prize was presented by Edward Enninful, the editor of British Vogue, at a ceremony at Margate’s Dreamland which was broadcast live on the BBC.

The Turner prize show continues in Margate, free of charge, until 12 January.

More: ‘Good for them!’ – subverting the Turner prize is what artists are meant to do