An Alternative View of Human Nature: Rebecca Solnit on Disaster as a Catalyst for Dignity, Agency, and Human Goodness

“The constellations of solidarity, altruism, and improvisation are within most of us and reappear at these times.” 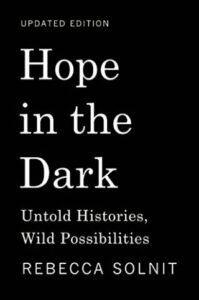 In his diary of moral development, young Tolstoy proclaimed: “This is the entire essence of life: Who are you? What are you?” The part left unspoken, perhaps because it is often unspeakable, is that there is no solid self to give a constant answer — we are many things and many people under different circumstances, situationally awakened into dormant multitudes we may not have suspected resided within us. The young Borges recognized this in one of his earliest essays. Paradoxically, the noblest and most beautiful of our potentialities of being can come alive under the ugliest and most catastrophic of circumstances — those moments and periods that cannot be described by any other word than “disaster.”

This is what Rebecca Solnit, that mighty anchor of collective memory and champion of the human spirit, reminds us in the preface to the new edition of Hope in the Dark: Untold Histories, Wild Possibilities (public library) — her timelessly, endlessly elevating manifesto for resisting the defeatism of easy despair. 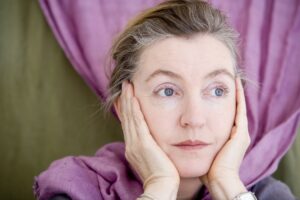 The assumption behind much disaster response by the authorities — and the logic of bombing civilians — is that civilization is a brittle façade, and behind it lies our true nature as monstrous, selfish, chaotic, and violent or as timid, fragile, and helpless. In fact, in most disasters most people are calm, resourceful, altruistic, and creative. And civilian bombing campaigns generally fail to break the will of the people, making them a waste as well as a crime against humanity.

What startled me about the response to disaster was not the virtue, since virtue is often the result of diligence and dutifulness, but the passionate joy that shined out from accounts by people who had barely survived. These people who had lost everything, who were living in rubble or ruins, had found agency, meaning, community, immediacy in their work together with other survivors. 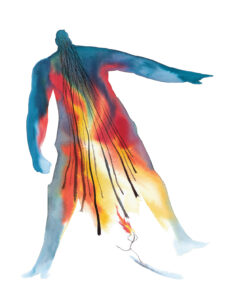 Art by Alessandro Sanna from Pinocchio: The Origin Story

Looking back on her earlier inquiry into who we became amid disaster — work drawing on disciplines as varied as sociology, psychology, economics, neurobiology, and political science to subvert the old myths of human nature and redefine it as “something more communal, cooperative, and compassionate” — Solnit adds:

[This] testimony … suggested how much we want lives of meaningful engagement, of membership in civil society, and how much societal effort goes into withering us away from these fullest, most powerful selves. But people return to those selves, those ways of self-organizing, as if by instinct when the situation demands it. Thus a disaster is a lot like a revolution when it comes to disruption and improvisation, to new roles and an unnerving or exhilarating sense that now anything is possible.

This rescue of our reputations from the social darwinists and the Hobbesians is important, not to feel positive about ourselves but to recognize the radical possibilities that can be built on an alternative view of human nature.

Solnit plumbs the depths of these possibilities in her 2009 book A Paradise Built in Hell: The Extraordinary Communities That Arise in Disaster (public library) — an incisive investigation of the realities of “human nature,” as distinctly and often shockingly different from its sociocultural myths, through five major disasters ninety-nine years apart, from the 1906 San Francisco earthquake to Hurricane Katrina in New Orleans. 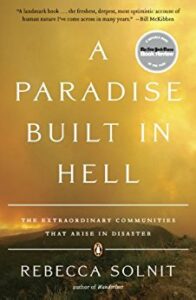 In the prelude, titled “Falling Together” — a beautiful counterpoint to the notion of falling apart — Solnit wrests from etymology an arresting and timely metaphor for the possibilities contained in catastrophe, be it natural or human-made, physical or political:

The word disaster comes from the Latin compound of dis-, or away, without, and astro, star or planet; literally, without a star. It originally suggested misfortune due to astrologically generated trouble, as in the blues musician Albert King’s classic “Born under a Bad Sign.”

In some of the disasters of the twentieth century — the big northeastern blackouts in 1965 and 2003, the 1989 Loma Prieta earthquake in the San Francisco Bay Area, 2005’s Hurricane Katrina on the Gulf Coast — the loss of electrical power meant that the light pollution blotting out the night sky vanished. In these disaster-struck cities, people suddenly found themselves under the canopy of stars still visible in small and remote places. On the warm night of August 15, 2003, the Milky Way could be seen in New York City, a heavenly realm long lost to view until the blackout that hit the Northeast late that afternoon. You can think of the current social order as something akin to this artificial light: another kind of power that fails in disaster. In its place appears a reversion to improvised, collaborative, cooperative, and local society. However beautiful the stars of a suddenly visible night sky, few nowadays could find their way by them. But the constellations of solidarity, altruism, and improvisation are within most of us and reappear at these times. People know what to do in a disaster. The loss of power, the disaster in the modern sense, is an affliction, but the reappearance of these old heavens is its opposite. This is the paradise entered through hell.

Complement with Albert Camus on strength of character through difficult times, Toni Morrison on the antidote to despair, Viktor Frankl on how we elevate each other, and Martha Nussbaum on the nuanced relationship between agency and victimhood, then revisit Solnit on the grounds for hope, the rewards of walking, what reading does for the human spirit, and how modern noncommunication is changing our experience of time, solitude, and communion.