For Western Press, the Only Coup in Venezuela Is against Guaidó 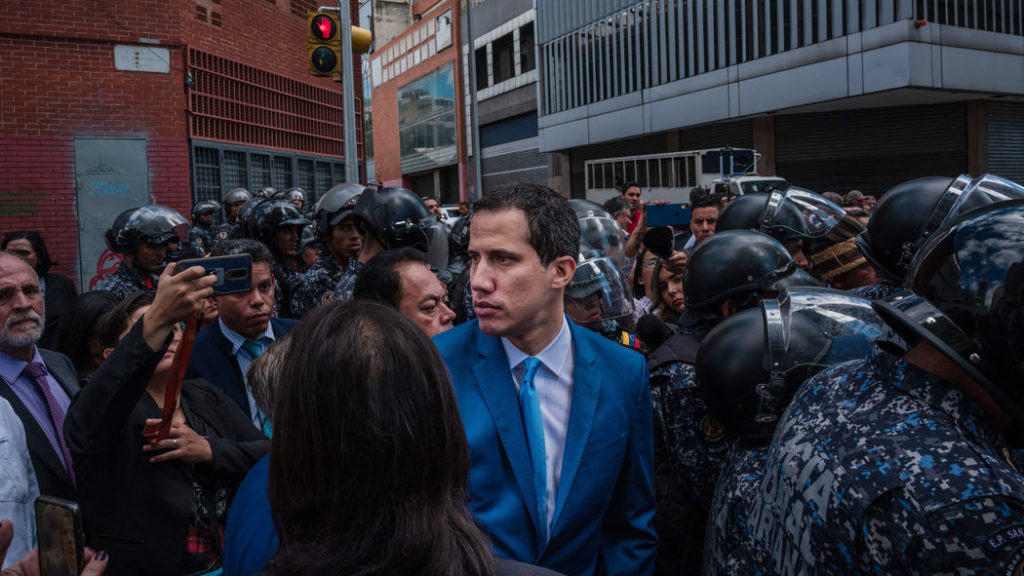 Such headlines obscure the elementary if inconvenient fact that Guaidó failed to secure the necessary votes from his own coalition’s deputies to continue as president of the legislature, leading him to convene a parallel, ad hoc session in the offices of the right-wing El Nacional newspaper. 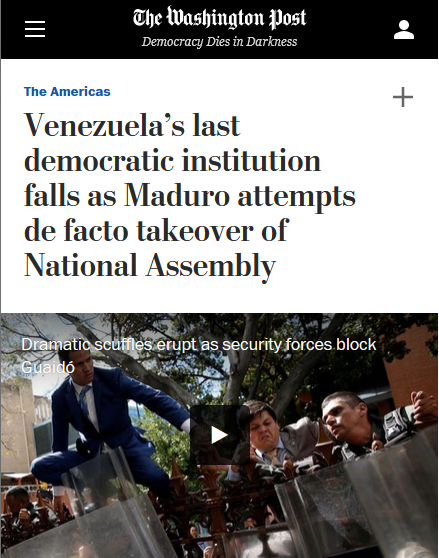 The Washington Post (1/5/20) described Venezuelan lawmakers voting against someone other than Washington’s chosen candidate to head the assembly as “sedition within the opposition.”

Corporate journalists repeat unceasingly the US State Department talking point that the January 5 assembly election, which chose Luis Parra as the legislative body’s new president, was “phony” because Guaidó and his loyalists were barred from attending the session, rendering the vote void.

As Venezuelanalysis (1/5/20) reported, this narrative was refuted by pro-Guaidó lawmaker William Davila, who, after strolling in to the legislature, told press that with few exceptions, virtually all deputies were permitted to take their seats. Other senior opposition lawmakers, including the outgoing first and second vice presidents of the body, were visibly present inside the parliament.

Moreover, video evidence reveals that Guaidó was not himself “prevented,” as the New York Times (1/5/20) had it, from entering the legislature, but rather refused to do so except in the company of fellow lawmakers whose parliamentary immunity had been revoked for alleged criminal offenses. Likely knowing he did not have the votes to secure reelection, Guaidó appears to have declined to attend the session, going as far as to scale a fence in a publicity stunt widely reported by Western outlets that all but ignored the crucial facts behind the day’s events.

Corporate media followed up their lie that the pro-Guaidó opposition was banned from parliament with the dubious claim that the subsequent vote held in the offices of El Nacional was “official.” The Washington Post (1/5/20) matter-of-factly stated, “In a 100-to-0 tally — enough to put him over the top in a full session of the 167-seat chamber — those present reelected Guaidó as head of the legislature.” The reporters evidently neglected to inspect the actual vote tally, which contained glaring irregularities such as votes by legislators abroad fleeing criminal charges, as well as those cast by substitutes for deputies who had already voted for Parra. As even hard-right, Miami-based journalist Patricia Polea highlighted, Jose Regnault Hernandez, the substitute for newly sworn-in National Assembly Second Vice President Jose Gregorio Noriega, was allowed to vote for Guaidó despite Noriega having himself stood for election on a rival ticket earlier that afternoon.

It is also deeply ironic that Western outlets would rush to declare the legitimacy of an irregular vote held in the offices of a local newspaper, given the lengths they have gone to deny the existence of press freedom in Venezuela (FAIR.org, 5/20/19). 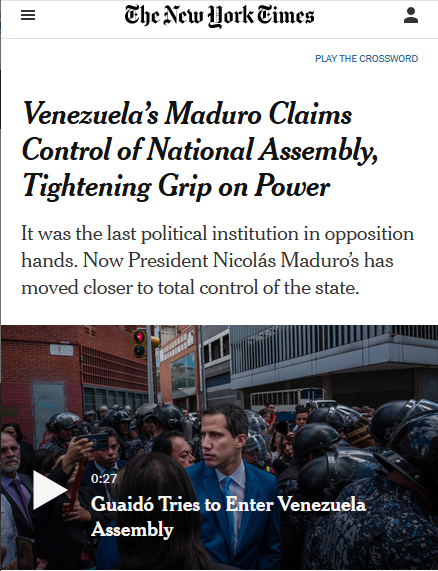 Why isn’t Guaidó in jail?

Procedural formalities aside, the real question, which corporate journalists will never ask, is why an opposition figure who arbitrarily declared himself “interim president” with the backing of hostile foreign powers, and who urged the military to rise up to install him in the presidential office, would be permitted to set foot outside a jail cell in Venezuela, let alone stand for reelection as head of parliament?

The answer would require admitting that this naked violation of sovereignty is only tolerated because of the constant threat of lawless imperial violence, which US corporate media enthusiastically cheerlead against other independent Global South states like Iran.

Instead, Western journalists continue to whitewash the US-sponsored coup–the sixth major attempt since 2002–impugning Maduro’s democratically elected government as “authoritarian” or a “dictatorship” (FAIR.org, 4/11/19;  8/5/19), which is newspeak for “legitimate target for bombing and/or murderous sanctions.”

Throwing to the wind any semblance of neutrality, the New York Times (1/5/20) reported:

Venezuela’s authoritarian leader, Nicolás Maduro, moved on Sunday to consolidate his grip on power by taking control of the country’s last independent institution and sidelining the lawmaker who had staked a rival claim to the presidency.

“The political chaos comes at a time when Venezuela is facing economic collapse,” the paper of record added, bolstering the rationale for Maduro’s overthrow. “Hunger is widespread, and millions have fled the country.”  Like most corporate media (FAIR.org, 6/26/19), the Times reflexively avoided mention of US economic sanctions’ role in severely exacerbating the crisis and killing tens of thousands since 2017, writing off the illegal, inhumane measures as “sanctions on Mr. Maduro’s government.”

For the corporate press, it would appear that the only “coup” is that perpetrated by Maduro in insisting on serving out his elected mandate (Washington Post, 1/6/20; Wall Street Journal, 1/6/20; Forbes, 1/7/20).

In their elegies to the “last democratic institution in the authoritarian South American state” (Washington Post, 1/5/20), Western journalists rarely attribute Guaidó any significant blame for the perceived debacle.

Despite acknowledging Guaidó’s falling popularity, following his utter failure to oust Maduro, mainstream outlets have turned a blind eye to the opposition leader’s string of humiliating scandals. Guaidó has been linked to Colombian paramilitary drug lords, while his inner circle has been accused of embezzling hundreds of thousands of dollars in aid funds, among other illicit acts. 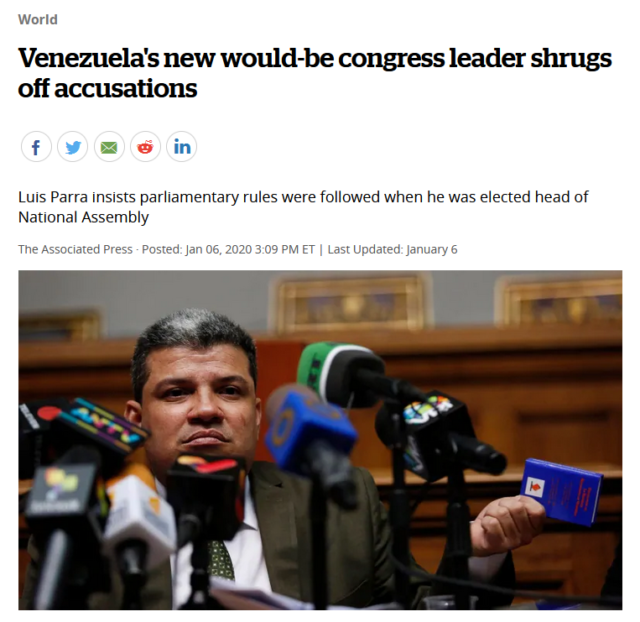 Tellingly, the only corruption allegations mentioned in the latest corporate coverage are those against Parra and his dissident opposition colleagues. Making little effort to conceal its bias, CBC (1/6/20) describes the new National Assembly president as “a previously unknown backbencher mired in accusations of bribe-taking,” whose “rambling comments” were challenged by journalists.

The double standard is striking, given that Western media have devoted strenuous efforts over the past year to anointing a “previously unknown backbencher” as president of Venezuela. The attacks on Parra comes amid threats of US sanctions against him and other opposition politicians who broke with Guaidó. The blatant imperial blackmail recalls similar US threats reportedly issued against opposition presidential candidate Henri Falcón, who defied the opposition’s 2018 electoral boycott that paved the way for the current coup efforts.

Corporate journalists’ discouragement over Guaidó’s failures (FAIR.org, 7/23/19) is becoming ever more pronounced (e.g., Reuters, 12/3/19; Washington Post, 12/17/19; New York Times, 1/6/20). But at the end of the day, they have simply invested too much in this smooth, technocratic figure to fundamentally fault him, let alone actually question the imperial regime-change machinery that produced him and his elite coterie.

Lucas Koerner is an editor and political analyst at Venezuelanalysis.