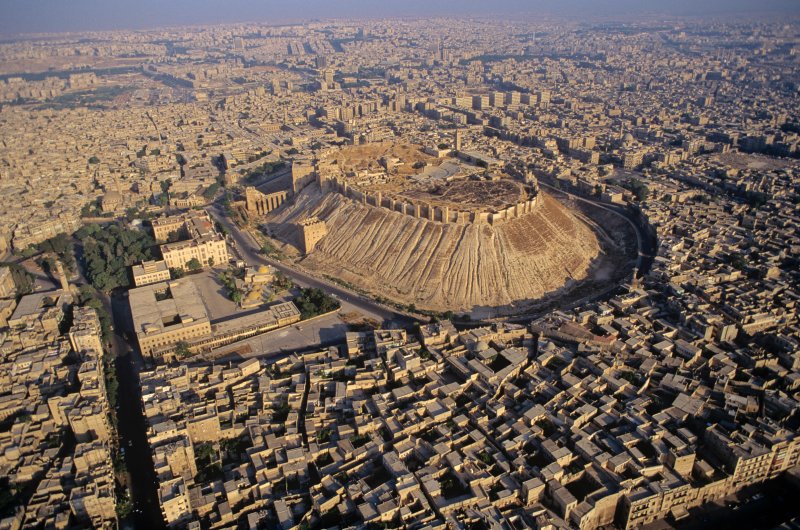 Aerial view of the citadel in the ancient city of Aleppo, Syria.
Sygma/Getty Images

14 Jan 2020 – In the days of tension that have followed the U.S. airstrike that took out Iran’s Gen. Qasem Soleimani, an old trope about the Middle East has reared its ugly head. On Wednesday [8 Jan] on Fox News, former Deputy National Security Adviser K.T. McFarland repeated it when she claimed that in

“…the Middle East, they’ve been fighting for 4,000 years. It’s been an ethno-sectarian battle and psychodrama, and they’ve been killing each other for millennia. Their normal state of condition is war.”

This trope is frequently turned to by those who would have the world believe that war in the Middle East is somehow innate and inevitable. But a look at the history of the region reveals that it’s simply not true. People in the Middle East haven’t “been killing each other” at any rate that exceeds average human levels of conflict. Indeed, the region that lays claim to being the “cradle of civilization” had developed quite, well, civilized and complex systems of compromise and coexistence that allowed its diverse peoples, faiths and ethnic groups to live together over very long periods of time.

In fact, imperial systems like those that ruled the Middle East for most of its history — spanning vast swathes of the globe and encompassing an immense diversity of ethnicities, faith traditions and customs — have of pragmatic necessity had to develop systems of accommodation, ways to avoid war. As recent scholarship has shown, such strategies characterized every imperial system in world history. For empires, while diversity could certainly be the cause of conflict, it was also a source of economic and political strength. That’s not to say these empires would have passed as modern democracies; premodern empires were often repressive. But their survival, longevity and military expansion depended on internal stability.

Accordingly, when in the mid-7th century Islamic rulers suddenly found themselves presiding over an empire stretching from Spain to the borders of India, with a majority Christian population, they, too, developed such a system, derived from the Qur’anic injunction to give the “People of the Book” — Jews, Christians and others who had received a holy book by divine revelation — a special, protected status. Later, even during periods of sectarian tension, the Shi‘i Fatimid caliphs had Sunnis, Christians and Jews serving as their viziers. Indeed, the Jews of Islam enjoyed freedoms and privileges unimaginable in Christian Europe, where they faced centuries of persecution.

Even the Mongols, famed for their brutality in conquest, realized the necessity for coexistence. In the 13th century, after creating the largest contiguous land empire the world has ever known, they established the “Pax Mongolica” — the Mongol Peace — that guaranteed religious freedom to all Mongol subjects. One branch of the Mongols, the Ilkhanids, ruled over modern-day Iran and — after converting to Islam — sparked a renaissance of art and culture that directly parallels the more famous one in Italy. And indeed, up through the Ottoman era and until the rise of political modernity, such systems thrived. The real history of the Middle East is a far cry from a “default” of war. In fact, the default was pragmatic coexistence.

It’s important to underscore that it’s not that the history of the Middle East was free of conflict, only that it was not defined primarily by conflict. In premodern times, for example, the region fell under the sway of various competing forces, from ancient Mesopotamian and Assyrian conquerors to the armies of Alexander the Great, the Roman Empire and the Crusades. The coming of political modernity in the 19th century introduced ideas about equal citizenship that transformed older systems that had traditionally kept tensions in check. And as I have written before, in more recent memory — at least in the memory of most people alive today — modern colonialism under the major European powers and post-colonial conflict, as seen in the 1953 American and British CIA coup in Iran or the 2003 occupation of Iraq, have meant that the region has been the recipient of externally-imposed interventions that often destabilized older political landscapes, resulting in ongoing internal violence.

Furthermore, if that past is enough for some observers to justify a claim that the region’s default situation is war, the same could be said about Europe. As historian Mary Beard has argued, the Roman conquest of the area of modern France and Germany amounted to a “genocide.” Wars between rival nobles raged throughout the European Middle Ages, the Crusades launched violent pogroms against the Jews and the 30 Years’ War in the 17th century killed millions and can only be described as carnage. Nor has modernity brought peace: in the 20th century, Europe was the point of origin of the deadliest war in the history of the world. Yet few would ever characterize the history of Europe as defined primarily by conflict.

As war has devastated Syria­­­­­­­ in the past nine years, the conflict has taken on an overtly sectarian dimension, and it’s not uncommon for observers to issue fatalistic comments along the lines of K.T. McFarland’s. Sectarian conflict has been said to date back 1,400 years to the founding of Islam, and we frequently hear, as Fox news viewers did this week, that somehow people in the region are irrational, stubbornly embroiled in ancient conflicts and unable to join the modern world. There were sectarian identities in the medieval era, of course, and these sometimes led to conflict. But the intensity of current sectarian cleavages is a surprisingly recent development, effectively beginning with the arrival of European political modernity and only made worse by the post-WWII rise of the authoritarian Arab state. Later, tensions were aggravated by the Lebanese Civil War and by the post-2003 U.S. occupation of Iraq, which remade its sectarian landscape.

In the medieval period in Syria, the millennia-old incentive for pragmatic coexistence still held sway, and led powerful Sunni rulers to patronize and support shrines beloved by their Shi‘i subjects. Some 40 of them still stand today, revered by both Sunnis and Shi‘is. One such shrine has stood in Aleppo on a hill overlooking the city for nearly a thousand years. It is devoted to the Prophet Muhammad’s grandson al-Husayn, and in the 13th century, the Sunni ruler al-Malik al-Zahir, son of the great Muslim general Saladin, transformed it into the largest and most sumptuous shrine in all of Syria. Over its magnificent, faceted and inlaid stone entrance portal, al-Zahir left an inscription praising the four “Rightly-Guided” caliphs of the Sunnis alongside the twelve Imams of the Shi‘is. At the end, al-Zahir left a powerful injunction: “May God be pleased with all the companions of His Prophet” — in other words, regardless of sectarian devotion. And in doing so, al-Zahir carved in stone sentiment that powerfully reflects the nuanced, negotiated sectarian history of empires in Syria and elsewhere in the region.

The actions of that one medieval ruler are just one window into a much longer reality. Though of course there were conflicts, the truth is that coexistence has been as much the default in the Middle East as it has been anywhere else. To ignore that truth in declaring that the region is one where conflict is normal is damaging, and dehumanizing. That attitude makes people in the region unknowable and unsympathetic — and thus, ironically, only makes conflict more likely.

Stephennie Mulder is associate professor of Islamic Art at the University of Texas at Austin, president of Middle East Medievalists, and author of The Shrines of the ‘Alids in Medieval Syria: Sunnis, Shi’is and the Architecture of Coexistence. Her longer essay on this topic can be found in the recently-published reader Whose Middle Ages? Teachable Moments for an Ill-Used Past.