The Trump Administration Just Killed Iran’s Most Famous Military Commander. We’re Not Ready for What’s Next. 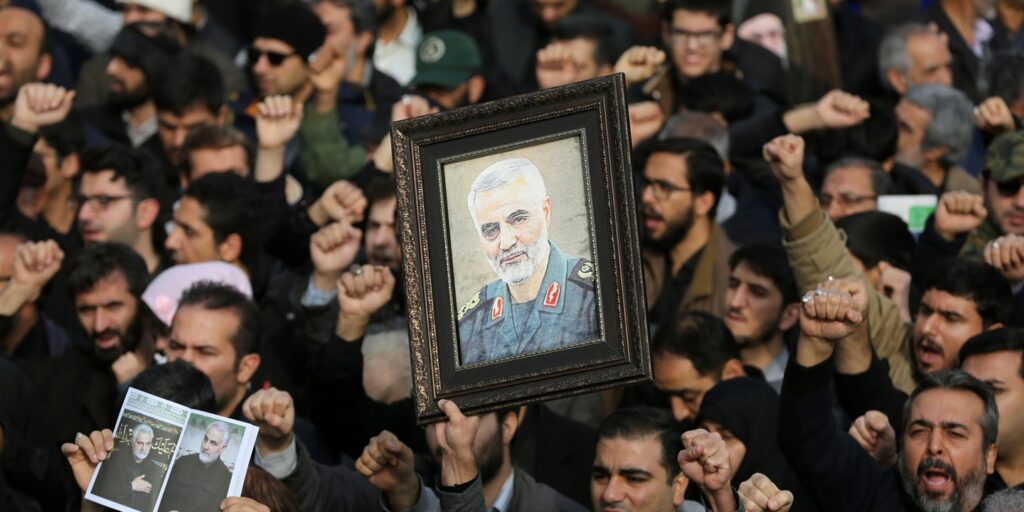 3 Jan 2020 – Until his death last night in an airstrike near Baghdad International Airport, Maj. Gen. Qassim Suleimani was the United States’s most formidable adversary in the Middle East. As commander of the Quds Force, the external operations branch of the Islamic Revolutionary Guard Corps, Suleimani fought a decadelong proxy war against the U.S. and its allies across Iraq and the region. It was a conflict in which the Iranian side has largely come out on top, as their own leaked internal documents have shown.

The reported airstrike last night has taken this bitter conflict to an altogether new level. The killing of Suleimani, along with several other top Iraqi Shia militia leaders, is the single most significant lethal operation since the joint U.S.-Israeli assassination of Lebanese Hezbollah operative Imad Mughniyeh in Damascus in 2008.

It is also perhaps the most reckless foreign policy action by President Donald Trump since he took office. Unlike Mughniyeh or other nonstate militants that the United States has killed over the years, Suleimani was a ranking official of a foreign government. He was a popular figure among Iranian nationalists whose reputation as a battlefield commander in Iraq and Syria had been publicly promoted by a regime looking to boost its flagging domestic popularity. His killing seems to mark the beginning of direct hostilities between the United States and Iran, with top officials apparently not off-limits for violence. Late last night, the Department of Defense issued a statement claiming responsibility for Suleimani’s killing, saying that he and the Quds Force were “responsible for the deaths of hundreds of American and coalition service members and the wounding of thousands more.”

Although that claim is doubtless true, the statement did not indicate what the United States or its allies expect will occur in the wake of this extreme step. Despite their differences with Iran, neither the Obama nor the George W. Bush administrations thought it wise to kill Iran’s best-known military commander.

“This seems like a very shortsighted decision. I can’t imagine that much thought went into it besides the perception that killing Suleimani would look like a big victory,” said Dina Esfandiary, an expert on Iran at the Century Foundation. “The Iranians will definitely respond, but not in a way that triggers an all-out war, which they know they would lose.”

Based on past precedent, any Iranian response is likely to be asymmetric and carried out by proxy groups, and may also include physical or cyberattacks against critical infrastructure. To a degree not seen in years, U.S. personnel in Iraq may now also be at risk. In the past, directly targeting U.S. troops in the country was seen as taboo given the longstanding Iranian goal of preventing escalation that could lead to all-out war. But with the conflict suddenly turning into a hot war with the top-ranking Iranian as a target, that may well change. The consequences could be painful for both sides.

The killing of Suleimani is in many ways a watershed moment in a policy of confrontation with Iran that Trump has pursued since taking office. The relationship between the United States and Iran reached a relative high point following the signing of an Obama-era agreement over Iran’s nuclear program in 2015. From the beginning, that agreement had been opposed by hawks who recoiled against any compromise with Iran and pushed for the most aggressive stance possible. Trump’s decision to revoke U.S. participation in the nuclear deal after taking office helped set off the chain of events that has brought the two countries closer to full-blown war than at any time since the 1979 Iranian Revolution. Suleimani’s killing has also likely eliminated the possibility of a future U.S. president reentering the nuclear agreement should Trump lose the 2020 election.

“The strike is bad news, as it takes off the table any prospect of future dialogue between Iran and the United States,” Esfandiary said. “Suleimani was a popular figure inside Iran and even many Iranians who are against the government are likely to be outraged about the targeting of a high-ranking official of their country. No Iranian leader will be able to spare the political capital to engage with the U.S., at least for the foreseeable future.”

The killing of Suleimani is the latest and most significant event in an intensifying U.S.-Iran conflict inside Iraq. In response to shelling by Iranian militias that killed an American contractor and several Iraqis, the U.S. carried out an airstrike earlier this week that killed dozens of Shia militia members tied to Iran. Days later, members of that same militia stormed the U.S. Embassy, smashing windows and forcing diplomatic staff to barricade themselves inside for safety. That brief siege ended without any casualties.

To be clear, Suleimani was a military commander who had spent almost his entire life at war. He was no stranger to violence and in all likelihood envisioned such a death for himself. In secret cables, Iranian intelligence officers lamented the brutal and sectarian manner in which he had waged the war against the Islamic State in Iraq. In April, the Trump administration took the unusual step of designating the Revolutionary Guards a foreign terrorist organization. But the decision to kill such a powerful individual without any apparent idea of what comes next is chillingly reckless. What happens in the coming weeks and months is still a matter of speculation. But it is safe to say that if, as likely, bloodshed in the region immediately escalates, Iraqi civilians will pay the highest price.

“From the Iranian side, there will obviously be anger and a desire to retaliate,” said Thomas Warrick, a nonresident senior fellow at the Atlantic Council. “It is safe to assume that the Iranians or any militias in Iraq that they support had plans they were prepared to execute if an attack like this occurred. It’s clear that this is not going to be over tonight.”