Trump, Troll-In-Chief, Wags the Impeachment Dog by Going to War with Iran 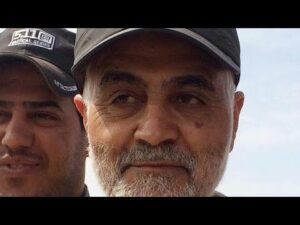 3 Jan 2020 – The madman in the White House has been sulking and raging for weeks about his impeachment proceedings, tweeting manically on some days more than 100 times. With the release by JustSecurity.org of unredacted emails on the Ukraine scandal showing that Trump personally (and illegally) withheld congressionally mandated military aid to an ally, the Republican defense of the president is collapsing. Some GOP senators such as Susan Collins and Lisa Murkowski seem to be weakening on calling witnesses and subpoenaing records for the Senate trial, and the Democrats only need four Republican senators to ensure a proper proceeding, which would certainly put Trump’s presidency in peril.

It is extremely suspicious that Trump has abruptly begun trafficking in the sanguinary merchandise of all-out war just at this moment when his throne is on the brink of toppling.

My title is a reference to the 1997 Barry Levinson film, “Wag the Dog,” starring Anne Heche, Dustin Hoffman, and Robert De Niro. Its story line at IMDB is, “After being caught in a scandalous situation days before the election, the president does not seem to have much of a chance of being re-elected. One of his advisers contacts a top Hollywood producer in order to manufacture a war in Albania that the president can heroically end, all through mass media.” Only, Iran is not Albania.

Trump has from the beginning of his presidential campaign appealed to the worst and most fascistic elements in American political life. At a time when the US has no credible peer military rival, he added hundreds of billions of dollars to the Pentagon budget, and the pudgy old chicken hawk lionized war criminals. Up until now, however, Trump shrewdly calculated that his base was tired of wasting blood and treasure on fruitless Middle Eastern wars, and he avoided taking more than symbolic steps. He dropped a big missile on Afghanistan once, and fired some Tomahawk Cruise missiles at Syria. But he drew back from the brink of more extensive military engagements.

Now, by murdering Qasem Soleimani, the head of the Jerusalem (Qods) Brigade of the Iranian Revolutionary Guards Corps, Trump has brought the United States to the brink of war with Iran. Mind you, Iran’s leadership is too shrewd to rush to the battlements at this moment, and will be prepared to play the long game. My guess is that they will encourage their allies among Iraqi Shiites to get up a massive protest at the US embassy and at bases housing US troops.

They will be aided in this task of mobilizing Iraqis by the simultaneous US assassination of Abu Mahdi al-Muhandis, the deputy head of the Popular Mobilization Forces. Al-Muhandis is a senior military figure in the Iraqi armed forces, not just a civilian militia figure. Moreover, the Kata’ib Hizbullah that he headed is part of a strong political bloc, al-Fath, which has 48 members in parliament and forms a key coalition partner for the current, caretaker prime minister, Adil Abdulmahdi. Parliament won’t easily be able to let this outrage pass.

The US officer corps is confident that the American troops at the embassy and elsewhere in Baghdad are sufficient to fight off any militia invasion. I’m not sure they have taken into account the possibility of tens of thousands of civilian protesters invading the embassy, who can’t simply be taken out and shot.

Trump may be counting on the unpopularity among the youth protesters in downtown Baghdad, Basra, Nasiriya and other cities of Soleimani and of al-Muhandis to blunt the Iraqi reaction to the murders. The thousands of youth protesters cheered on hearing the news of their deaths, since they were accused of plotting a violent repression of the rallies demanding an end to corruption.

Iraq, however, is a big, complex society, and there are enormous numbers of Iraqi Shiites who support the Popular Mobilization Forces and who view them as the forces that saved Iraq from the peril of the ISIL (ISIS) terrorist organization. The Shiite hard liners would not need all Iraqis to back them in confronting the American presence, only a few hundred thousand for direct crowd action.

You also have to wonder whether Trump and his coterie aren’t planning a coup in Iraq. In the absence of a coup, the Iraqi parliament will almost certainly be forced, after this violation of Iraqi national sovereignty, to vote to expel American troops. This is foreseeable. So either the assassination was a drive-by on the way out, or Trump’s war cabinet doesn’t plan on having to leave Iraq.

Although Trump justified the murder of Soleimani by calling him a terrorist, that is nonsense in the terms of international law. The Iranian Revolutionary Guards Corps is the equivalent of the Iranian National Guard. What Trump did is the equivalent of some foreign country declaring the US military a terrorist organization (some have) and then assassinating General Joseph L. Lengyel, the 28th Chief of the National Guard Bureau (God forbid and may he have a long healthy life).

#Pentagon statement on targeted killing of #suleimani: 1. It mentions that it aimed at “deterring future Iranian attack plans”. This however is very vague. Future is not the same as imminent which is the time based test required under international law. (1)

2. Overall, the statement places far greater emphasis on past activities and violations allegedly commuted by Suleimani. As such the killing appears far more retaliatory for past acts than anticipatory for imminent self defense.

3. The notion that Suleimani was “actively developing plans” is curious both from a semantic and military standpoint. Is it sufficient to meet the test of mecessity and proportionality?

4. The statement fails to mention the other individuals killed alongside Suleimani. Collateral? Probably. Unlawful. Absolutely.

What American corporate media won’t report is that Trump has put Iran under an almost complete economic blockade after breaching the 2015 nuclear accord that the US had signed. That accord removed economic sanctions on Iran in return for it mothballing 80% of its civilian nuclear enrichment program. That agreement could have formed the basis for reintegrating Iran into the world system and greatly reduced the tensions in the region for a generation.

Although Iran was certified by UN inspectors as abiding by the accord as long as it was in effect, Trump abruptly trashed the agreement. He then not only put the severest economic sanctions on Iran that have ever been applied to any country in peacetime, he went around the world twisting the arms of South Korea, Japan, India, and even China, pressuring them not to buy Iranian oil. There is no UN Security Council resolution imposing economic sanctions on Iran, so this is a rogue unilateral blockade imposed by Trump alone. It has strangled the Iranian economy, and people can’t afford key medicines for loved ones. A naval blockade is considered an act of war in international law, and Trump’s trade embargo is analogous in every way to such a blockade.

I predicted when Trump started doing these things that it would lead to conflict between Iran and the United States in ways that Trump himself could not foresee (people like Trump with narcissism personality disorder cannot empathize with the pain of other people, so Iran is invisible to him). The economic strangulation of Iran was bound to lead to pushback, as with encouraging Iraqi Shiite militias to target Americans, and to an escalation between the two countries.

If the Middle East now spins out of control, it is on Trump and his desperation to undo every good thing Barack Obama ever accomplished.