‘We Apologize’ for Trump’s Reckless Aggression, US Peace Advocates Say in Open Letter to Iranian People

The letter, from activist group CodePink, comes ahead of peace demonstrations scheduled Saturday in 200 cities around the world. 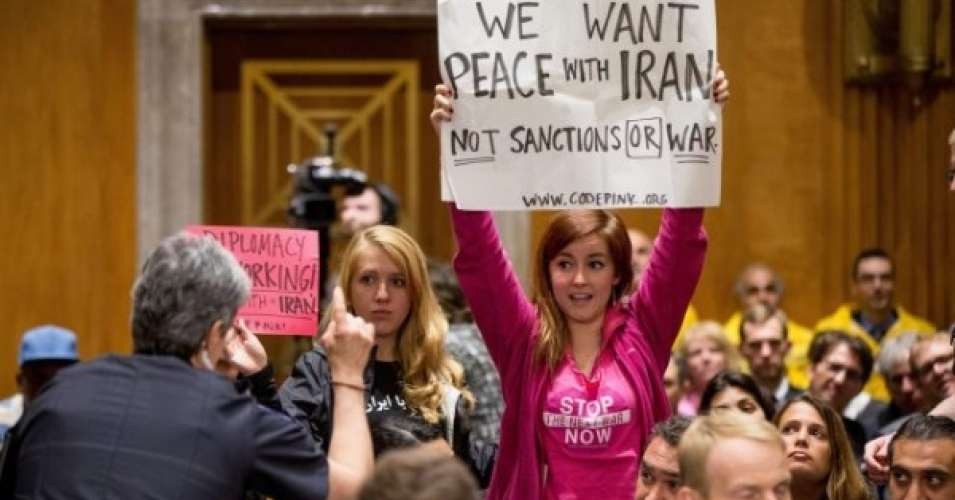 CodePink protesters at a Congressional hearing on Iran in 2015.
(Photo: CodePink)

24 Jan 2020 – The peace advocacy group CodePink is collecting American signatures for a letter apologizing to the Iranian people for U.S. aggression and warmaking, particularly President Donald Trump’s decision on January 3 to order the assassination by drone strike of Iranian military commander Qasem Soleimani while Soleimani was in Iraq.

“As Americans committed to peace and the safety of all people, we, the undersigned, apologize for the actions of our reckless, hate-filled president,” the letter says, “and pledge to do everything we can to stop Trump’s aggression, remove the crippling sanctions you are suffering under, and resume a process of diplomacy with your country.”

People everywhere are signing CODEPINK’s open letter of apology to the people of Iran. https://t.co/d1qwKg0ozk

The U.S. and Iran have been in a Cold-War style conflict for decades, but the Soleimani assassination marked a notable escalation in tensions.

In a tweet about Saturday’s demonstrations, CodePink cofounder Medea Benjamin warned that war was still a very real possibility.

“Think we avoided war with Iran a few weeks ago?” said Benjamin. “Think again. We are still on the brink.”

CodePink’s letter condemns in no uncertain terms the continuing conflict.

“The recent U.S. actions towards Iran are the most dangerous and provocative of all of Donald Trump’s foreign policy decisions,” reads the letter. “The assassination of Soleimani—ordered by President Trump and carried out on sovereign Iraqi soil—risked the safety of the entire world, set a dangerous precedent, and was likely illegal under international law.”

The demonstrations, which are in 200 cities around the world, are set for Saturday. CodePink is joining more than 150 other sponsors for the event.

Find a protest near you here.

“Please accept our hand in friendship,” says the letter. “May the peacemakers prevail over those who sow hatred and discord.”