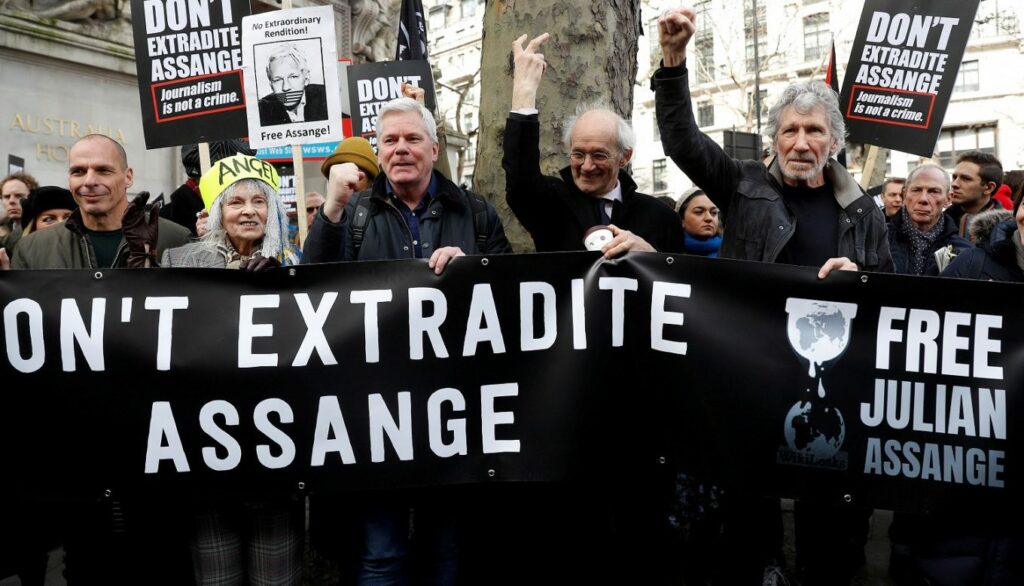 22 Feb 2020 – Hundreds of supporters of Julian Assange marched through London today to pressure the U.K. government into refusing to extradite the WikiLeaks founder to the United States to face spying charges.

Famous backers, including Pink Floyd’s Roger Waters, Pretenders singer Chrissie Hynde and fashion designer Vivienne Westwood joined the crowd protesting the U.S. espionage charges against the founder of the secret-spilling website. An extradition hearing for Assange is due to begin in a London court on Monday 24 Feb.

WikiLeaks spokesman Kristinn Hrafnsson told a rally outside Parliament that the prosecution of Assange represented “a dark force against (those) who want justice, transparency and truth.”

U.S. prosecutors have charged the 48-year-old Australian computer expert with espionage over WikiLeaks‘ publication of hundreds of thousands of confidential government documents. If found guilty, he could be sentenced to up to 175 years in prison. 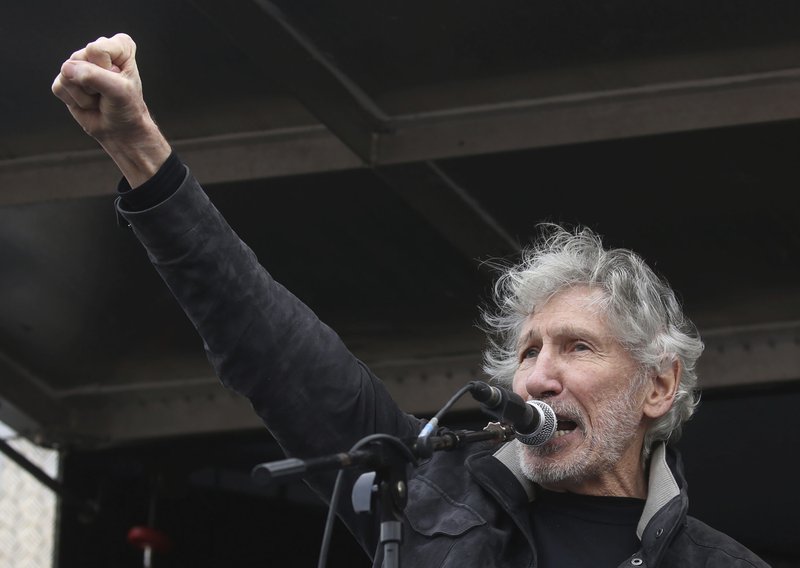 American authorities say Assange conspired with U.S. Army intelligence analyst Chelsea Manning to hack into a Pentagon computer and release secret diplomatic cables and military files on the wars in Iraq and Afghanistan.

Assange argues he acted as a journalist and is therefore entitled to First Amendment protection. He also maintains the documents exposed wrongdoing and protected many people. 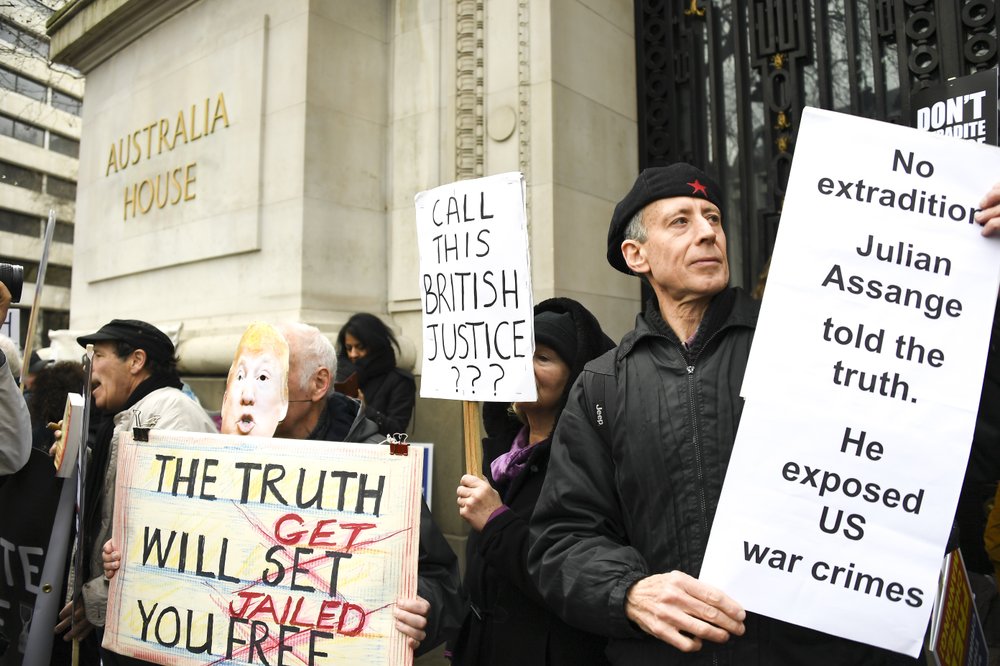 Demonstrators gather outside Australia House to protest against the extradition of Wikileaks founder Julian Assange, in London, Saturday, Feb. 22, 2020. Assange is fighting extradition to the United States on spying charges.
(AP Photo/Alberto Pezzali)

Civil liberties groups and journalism organizations, including Amnesty International and Reporters Without Borders, have urged the U.S. to drop the charges, saying they set a chilling precedent for freedom of the press.

More than 40 jurists from the U.K., the U.S., France and other countries published a letter Saturday asking the British government to reject the extradition request. They accused the U.S. of “extra-territorial overreach” in seeking to prosecute an Australian who was based in the U.K.

Assange is currently incarcerated in London’s high-security Belmarsh Prison, having previously spent seven years inside the Embassy of Ecuador.

He holed up in the South American country’s U.K. diplomatic mission in 2012 to avoid being sent to Sweden to face questioning over rape and sexual assault allegations. That case has since been dropped. 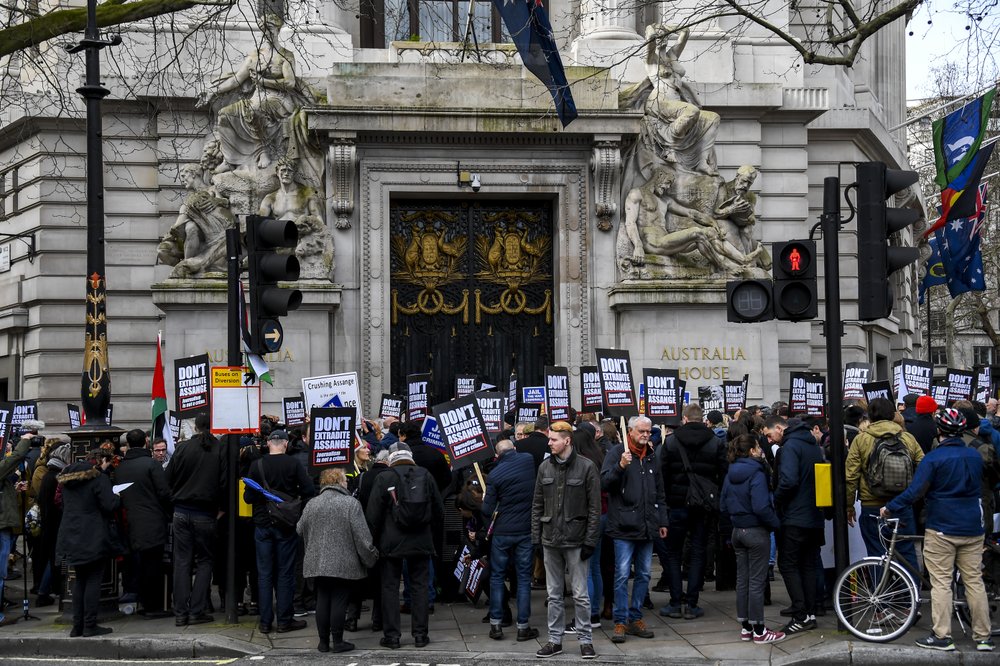 Demonstrators gather outside Australia House to protest against the extradition of Wikileaks founder Julian Assange, in London, Saturday, Feb. 22, 2020. Assange is fighting extradition to the United States on spying charges. (AP Photo/Alberto Pezzali)

Assange was evicted from the embassy in April 2019 and arrested by British police for jumping bail seven years earlier.

Assange’s legal team argues that the case against him is politically motivated. His lawyers said they would present evidence they claim shows that Assange was offered a pardon if he agreed to say Russia was not involved in leaking Democratic National Committee emails during the 2016 U.S. presidential election campaign.

Emails embarrassing for the Democrats and Hillary Clinton’s presidential campaign were hacked before being published by WikiLeaks in 2016. 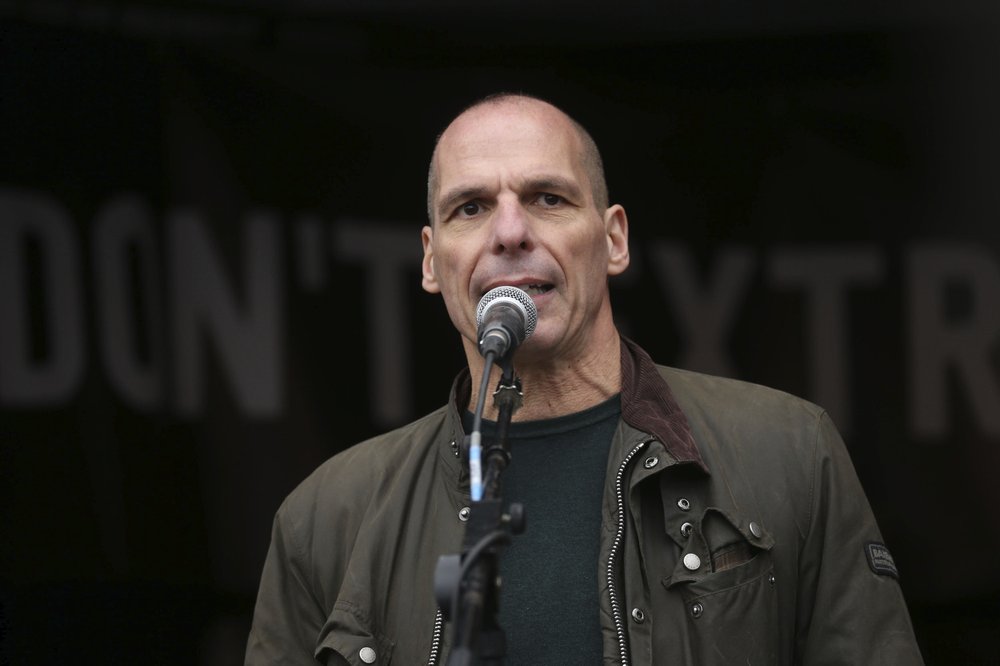 Former finance minister of Greece, leader of the MeRA25 Party and professor of economics, Yanis Varoufakis speaks to crowds gathered at Parliament Square in London, protesting against the imprisonment and extradition of Wikileaks founder Julian Assange extradition, Saturday Feb. 22, 2020.
(Isabel Infantes/PA via AP)

Assange’s lawyers say the offer was made in August 2017 by then-Republican Congressman Dana Rohrabacher, who claimed to be acting on behalf of President Donald Trump.

The White House called the claim “a complete fabrication and a total lie.”

Rohrabacher said in a statement that he told Assange “that if he could provide me information and evidence about who actually gave him the DNC emails, I would then call on President Trump to pardon him. At no time did I offer a deal made by the President, nor did I say I was representing the President.”

This story has been corrected to show that Chrissie Hynde of The Pretenders is American, not British.