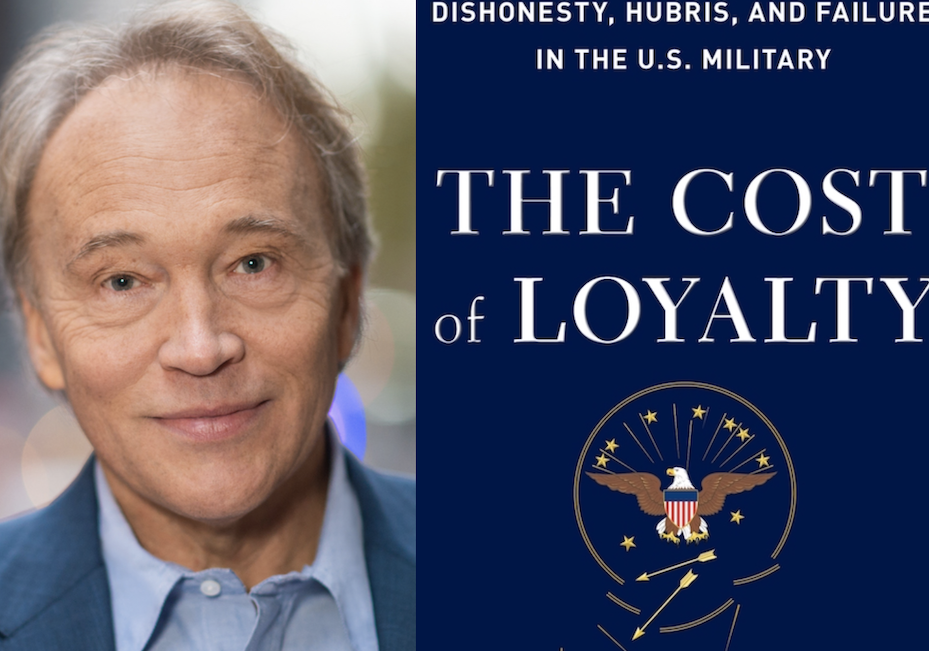 West Point professor Tim Bakken and the cover his new book, due out February 18, 2019.  (courtesy of Bloomsbury)

17 Feb 2020 – What do you call a civilian law professor who, after successfully filing for federal whistleblower status to keep his job teaching at West Point Military Academy, proceeds to write a bombshell book about the systematic corruption, violence, fraud, and anti-intellectualism he says has been rampant at the historic institution for over a hundred years?

Well, if you are part of the military leadership or an alumnus of the storied military academy, you may call him a traitor.

But if you are anyone searching for reasons why the most powerful military in the world has not won a war in 75 years, you might call him a truth-teller. And a pretty brave one at that.

Tim Bakken’s The Cost of Loyalty: Dishonesty, Hubris and Failure in the U.S. Militaryis set for release tomorrow, and it should land like a grenade. Unlike the myriad critiques of the military that wash over the institution from outside the Blob, this one is written by a professor with 20 years on the inside. He knows the instructors, the culture, the admissions process, the scandals, the cover-ups, and how its legendary “warrior-scholars” have performed after graduation and on the battlefield.

Bakken’s prognosis: the military as an institution has become so separate, so insulated, so authoritarian, that it can no longer perform effectively. In fact, it’s worse: the very nature of this beast is that it has been able to grow exponentially in size and mission so that it now conducts destructive expeditionary wars overseas with little or no real cohesive strategy or oversight. Its huge budgets are a source of corporate grift, self-justification, and corruption. The military has become too big, yes, but as Bakkan puts it, it’s failing in every way possible.

In addition to losing wars, “the military’s loyalty to itself and determined separation from society have produced an authoritarian institution that is contributing to the erosion of American democracy,” writes Bakkan, who is still, we emphasize, teaching at the school. “The hubris, arrogance, and self-righteousness of officers have isolated the military from modern thinking and mores. As a result, the military operates in an intellectual fog, relying on philosophy and practices that literally originated at West Point two hundred years ago.”

Bakken contends that West Point and the other U.S. military academies is first “on the assembly line,” providing cultural and social firmament for this separate world. It is where young men and women are indoctrinated and conditioned to be “of the body” and become career-long missionaries of the system. It has been like this for as long as the schools have had their place, yes, but as the civilian-military gap has grown significantly post-Vietnam, it endures less and less scrutiny from its federal minders and enjoys more reverence than it deserves from the public at large. This has led to the creation of an unaccountable hierarchy based not on merit, but on what Bakken calls “the primacy of loyalty.”

“The military has almost become a religion to a lot of Americans, where it cannot be challenged, and if we do (challenge it), we are accused of being unpatriotic,” Bakken said in a recent interview with TAC. Aside from the issues of accountability, leadership ends up working in a massive bubble where they end up believing their own hype.

“One of the leading themes here is the separation between the military and civilian cultures. A lot of people have talked about that but they haven’t really identified the implications,” and how it might be responsible for our failures at war, Bakken added.

“In the end, the proof is in the pudding, in the wars in Korea, Vietnam, Afghanistan, and Iraq,” he told TAC. “The generals do not know how to win these wars, and they don’t have the courage to tell Americans that we can’t win and that we shouldn’t be fighting them.” Furthermore, he added, “the generals of all those wars were graduates of West Point.”

TAC reached out to West Point for comment. “United States Military Academy (USMA) professors have the right to express their views,” a spokesperson responded. “However, USMA does not share the viewpoints and opinions in this book.”

The Cost of Loyalty was born out of two major events in Bakken’s career as a law professor.

First was his experience in 2007 setting up a department of law at the new national military academy in Afghanistan. It was clear he said, that the conditions on the ground did not match the positive rhetoric broadcast back home and, “that something was happening that had not been fully analyzed, at least from my perspective.”

Second, back in the U.S., he filed for federal whistleblower status, claiming the West Point leadership retaliated against him for calling out favoritism among the military staff. There are both civilian and military professors at the military academies, but unsurprisingly, the military instructors enjoy an elevated status, and it’s not based on experience or merit. Brought in through entrenched cronyism and under lower academic standards, they get more money, choice leadership positions, and preferences for course work. He won the case in 2012, and was able to keep his job.

This experience on campus and in the field, watching the results of the “assembly line” system at work, led Bakken to his theory, a “formula” if you will, going “from the academy, to the military, to lost wars.”

For readers of TAC, the idea that these are losing wars is far from new. Neither are his observations that the military industrial complex is a separate ecosystem onto itself, one that breeds loyal disciples while weeding out creative thinkers and doers.But if the real sausage is made at the military academies, then Bakken has invited us in on some of the more distasteful elements going right on under our noses.

“Over the past 75 years, all of America’s top commanders have displayed remarkably similar incompetence, narrow thinking and self-assuredness,” Bakken writes. “The personality traits and approaches of the top military leaders are replicated time and time again, and examining West Point’s role in this is instructive.”

Bakken paints West Point as big house of smoke and mirrors that outside of the minds of its most dedicated, is in reality the opposite of what it professes to be—a highly exclusive training ground for its elite officer corps, imbued with all of the same historical trappings and academic regard as the nation’s Ivies.

He contents that West Point’s high national rankings on annual college lists are due to its resources and reputation for the highest student academic standards. A closer look reveals, first, that the “resources” are courtesy of the American taxpayer—an over-inflated budget of  $500 million a year, even though the school graduates only 950 cadets annually.

For example, West Point boasted that it received 15,171 applicants for the class of 2016, but only accepted a fraction, suggesting an acceptance rate in the low double-digits, if not single digits, like Yale and Harvard. The reality is, the school was counting student requests for information as “applications.” It turns out that the school only received 2,394 “fully qualified and nominated” applications that year. Of that number, 1,358 were accepted for the class of 2016, resulting in an acceptance rate of 56.7 percent. He said he and other professors raised concerns about this, but nothing changed.

As far as West Point only taking the “best and brightest,” Bakken notes that West Point and the equally lionized Naval Academy in Annapolis were ranked 111 and 112 in average SAT scores among American colleges and universities in a 2014 study. The myth is also punctured by the underperforming prep school and the athletic pipelines that bring otherwise unqualified students into the fold.

Meanwhile, what are they learning? Not how to think for themselves. The curriculum is not focused on strategy, as one would think, but engineering, Bakken points out. In 2017 four general education courses were dropped from the core requirements for all cadets–philosophy, math, english, and yes, military history. The curriculum, which is not developed by professors but handed to them as if they were children too, is designed so that students “make a few individual choices as possible,” and leans more toward rote learning and skill building, with black-and-white answers to everything. This pervades everything in their super-controlled daily life.

In the end, Bakken contends this world reduces “officers who are emotionally immature, needy, and dependent on others to make the most mundane decisions for them.”

The cycle is worth noting: these cadets graduate, and those who have fully bought in, will someday cycle back as professors through an elaborate conduit of cronyism and despite no real experience or bonafides in their academic space (of the 550 professors at West Point, 445 are military officers, and a vast majority do not have PhDs). A lackluster program that teaches students nothing but liturgy and does not encourage creative thinking or challenging the status quo, translates into officers and soldiers who are ill-equipped for the modern challenges of war—and telling the truth.

They are prone to corruption, too—and it is widespread among the officer corps in all of the branches—as one learns in the early stages of the assembly line that rewards come to those who suck up, button up, and don’t shake things up.

Bakken talks about the mediocrity military-wide that has produced generals like Tommy Franks, who bungled the initial invasion and aftermath of Iraq, and Gen. Richard Myers, Chairman of the Joint Chiefs, who did nothing when Secretary of Defense Donald Rumsfeld refused the military more forces for the initial invasion in 2003. He points to the dangerous loyalty of Gen. Colin Powell, who helped President Bush lie about weapons of mass destruction, and the hubris and arrogance of Generals Douglas MacArthur and William Westmoreland, who were responsible for massive strategy failures in Korea and Vietnam respectively. He talks about Gen. David Petraeus, a slick status seeker and West Point grad who told every Congressperson what he wanted to hear, and still managed to keep his reputation of military prowess after failures in Afghanistan and a shortsighted sleight-of-hand Surge in Iraq.

Bakken blames the civilian society for enabling the military to become everything the founders didn’t want at the birth of the country. If we do not take control back, he warned, the corruption, the self-destructiveness will only get worse. The wars will never end.

“If civil society doesn’t act to reform the military institution,” he writes, “we will all remain at the mercy of its failure.” 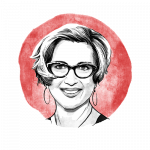 Kelley Beaucar Vlahos, executive editor, has been writing for TAC for the last decade, focusing on national security, foreign policy, civil liberties and domestic politics. She served for 15 years as a reporter for FoxNews.com, and at WTOP News in Washington from 2013-2017. She has also worked as a beat reporter at Bridge News financial wire (now part of Reuters) and Homeland Security Today, and as a regular contributor at Antiwar.com.