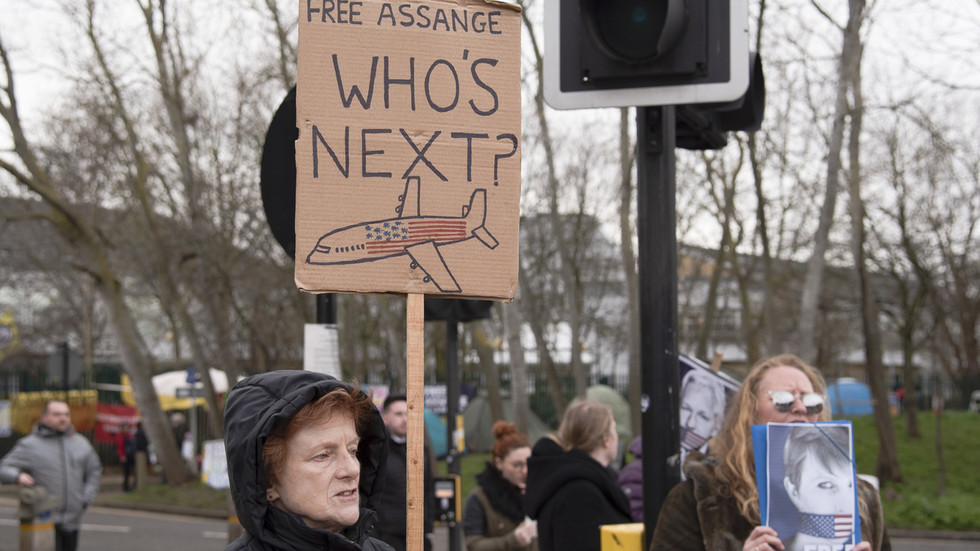 26 Feb 2020 – Assange extradition hearing should be the top story for the British media as it’s a dagger at their throat, but the majority of mainstream press either don’t care, or are actively participating in WikiLeaks’ founder crucifixion.

Having myself been born onto the path of resistance and having by reason of chance and circumstance little choice but to resist, I am drawn to those who have chosen to stand there with me when not only had they alternatives, but in some cases already secured for themselves a place in the firmament of privilege. One such person spoke alongside me at the recent Assange Rally in London live-streamed to a huge audience by RT.

The Hon Craig Murray already had a glittering career in the British Foreign Office, Her Majesty’s Ambassador is no small thing to be even in these shrunken times for British foreign policy.

But he threw it all away by standing up against torture, disappearances and political repression in the country to which he had been sent to represent the British interest. To the point when a LABOUR Foreign Secretary Jack Straw in dismissing him told him that he “over-focused on human rights to the detriment of British interests.” A telling and damning phrase indeed.

Even then, as a former ambassador, Murray could have looked forward to a lucrative career in commerce — the import/export business perhaps — had he corrected his focus a little, perhaps a moral cataract operation would have done the trick.

But when the madcap murder spree of the invasion and occupation of Iraq came along, he instead doubled down and became a considerable ally in the fight against the war, using all the gravitas and knowledge of his foreign office past to expose the same man — Jack Straw — and his overseer Tony Blair for the perfidy and perfect lunacy of the Bush and Blair War, which rages still.

And then came Julian Assange. Like me, Murray has the honour to be a friend of the world historic figure who will be remembered long after his persecutors are but a footnote. And so his indignation at the treatment of this political prisoner, like mine, has a personal, bitter edge.

But who could not be indignant at hearing the distinguished voice of Edward Fitzgerald QC appearing for the publisher at Woolwich Crown Court (or fort as I call it), connected as it is to the High Security Belmarsh Prison by a tunnel. It is as Court officials made clear to those complaining at the case being moved there from the usual Westminster Court — a “Terrorism Court”. Thus making physical the optical assumption intended. Guilty until proven innocent.

This is not justice. This is a political show trial which shames Britain. #FreeAssange https://t.co/lngFIq2nGH

Mr Fitzgerald described how a man who should by rights be in Oslo receiving a Nobel Prize had — on the first day alone of the hearing — been handcuffed on 11 occasions, stripped and intimately searched twice and held in five separate holding cells. And all for the heinous alleged crime of having published certain documents.

As Mr Fitzgerald pointed out, his client’s “crime” had been to publish truthful information in the public interest. When truth becomes treason he said, we are all in trouble.

And in trouble we surely are.

Also: Assange lawyer brings up claim US mulled ‘kidnapping and poisoning’ of publisher – here’s what we know

I’m not young but neither am I old. I can remember a time when it was possible to have some pride in British institutions. When being a judge meant something. When a bent cop or prison warden was not a commonplace. When politicians who lied — at least in parliament — were required not merely to immediately resign, but were then cast into a kind of purgatory for the rest of their lives. Now they become multi-millionaires, even sages who can summon the media on their whim and know that none of the hirelings with microphones at their feet will dream of referring to the unfortunate matter which caused their original defenestration.

And in a way, it is towards them that I reserve my deepest contempt.

The vast majority of the Fourth Estate in Britain either care nothing for the plight of Julian Assange, or are actively participating in his crucifixion.

On the face of it, that makes no sense. If it were the intention of these journalists to actually be worthy of that name, then the proceedings in Belmarsh would be the biggest story in their world. The law being tested in the Woolwich Crown Fort would be a mortal danger to them, a dagger at their throat, a sword of Damocles hanging over their head.

More: Assange blasts court for preventing communication with lawyers, alleges legal team is being SPIED on

The prosecution made perfectly clear that the mere possession by a newspaper or a broadcaster of the foreign state secrets published by Assange would itself be a crime under the US Espionage Act, and thus they themselves open to an extradition request from a foreign state. Though this statement was made in “open court,” virtually no msm journalist even reported it, never mind condemned it.

How has this situation come about? Whatever happened to Woodward and Bernstein, to the Sunday Times devastating campaign against the Thalidomide scandal, the New York Times revelations of the Pentagon Papers? Where is the reporting about My Lai?

The answer lies in the words of Francis Bacon four centuries ago, when he foretold of the impact of self-censorship: “the arrow that flies in the night” he called it. You don’t see it but it kills its quarry just the same.

If Julian Assange is sent into the dungeons of America, free journalism, free speech and even democracy itself will have been murdered in plain sight. On the British mainstream media watch.