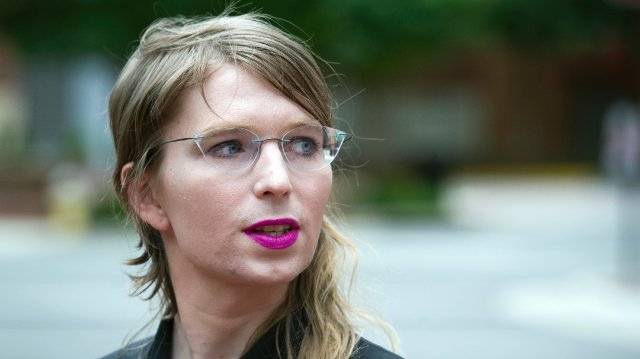 Manning’s legal team confirmed the incident in an statement to Gizmodo. She is currently in the hospital and is recovering, they said. Manning was scheduled to appear before a judge on Friday regarding a motion to terminate the sanctions she’s faced for refusing to testify.

U.S. prosecutors are attempting to “coerce” Manning into testifying about her past association with WikiLeaks founder Julian Assange by keeping her in jail. Assange, who has been detained in London for nearly a year, is currently battling extradition to the U.S. where he faces an 18-count indictment, including alleged violations of the Espionage Act, for publishing documents leaked by Manning in 2010.

Manning, who previously served seven years in a military prison for the leak, has stated her ongoing defiance stems from a contempt for the grand jury process itself. In a letter to Judge Anthony Trenga last year, Manning said she objected to the grand jury “as an effort to frighten journalists and publishers who serve a crucial public good.”

“I have had these values since I was a child, and I’ve had years of confinement to reflect on them,” she said. “For much of that time, I depended for survival on my values, my decisions, and my conscience. I will not abandon them now.”

In a statement, Manning’s lawyers said:

Ms. Manning is still scheduled to appear on Friday for a previously-calendared hearing, at which Judge Anthony Trenga will rule on a motion to terminate the civil contempt sanctions stemming from her May, 2019 refusal to give testimony before a grand jury investigating the publication of her 2010 disclosures.

In spite of those sanctions — which have so far included over a year of so-called “coercive” incarceration and nearly half a million dollars in threatened fines — she remains unwavering in her refusal to participate in a secret grand jury process that she sees as highly susceptible to abuse.

Ms. Manning has previously indicated that she will not betray her principles, even at risk of grave harm to herself.

In November, Nils Melzer, the United Nations special rapporteur on torture, labeled Manning’s reported treatment a “deprivation of liberty” and said the “open-ended, progressively severe” penalties she’s faced fulfill “all the constitutive elements of torture, or other cruel, inhuman or degrading treatment or punishment.”

The motion to lift the sanctions against her filed by Manning attorney Moira Meltzer-Cohen last month included a sealed report by psychologist Dr. Sara Boyd of the University of Virginia Forensic Clinic. In it, lawyers said, Boyd finds that Manning is “constitutionally incapable” of acting against her conscious.

Per the motion, the sealed report reads, in part:

“Ms. Manning exhibits longstanding personality features that relate to her scrupulousness, her persistence and dedication, and her willingness to endure social disapproval as well as formal punishments. She also has a tendency to see issues in black and white terms with regard to ethical and values-based judgment. These personality features are not likely to be modified by any intervention.”

Manning attempted suicide twice in 2016 while imprisoned for leaking archives of secret diplomatic cables and battlefield reports related to the U.S. wars in Afghanistan and Iraq. Her 35-year sentence was commuted by President Barack Obama in one his final acts of office.

This a developing story. It will be updated.